A whirlwind tour of the Go memory allocator and garbage collector, with tools and tips on how to optimize.

Eben Freeman (@_emfree_), an engineer at Honeycomb, talks about pitfalls and optimizations related to the memory allocator in Go.

Go is a managed-memory language, which means most of the time you don't have to worry about manual memory management, because the runtime does a lot of work for you. However, dynamic memory allocation is not free, and a program's allocation patterns can substantially affect its performance. The performance implications, however, are not obvious from language syntax. This talk covers techniques and tools that you can use to detect and address allocator bottlenecks.

The architecture of the storage / query service at Honeycomb: 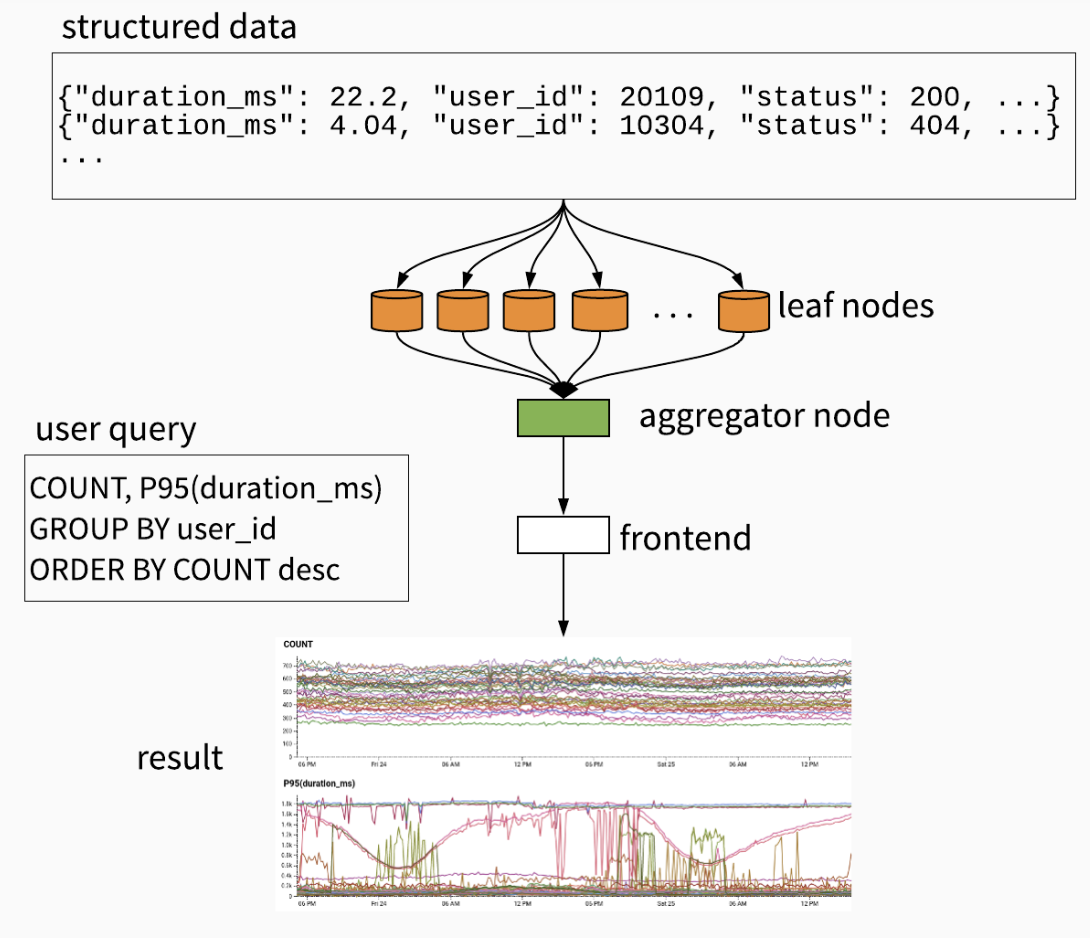 Using the techniques described in this talk, they were able to obtain speedups of up to 2.5x on some key benchmarks:

Outline of this talk

Depending on their lifetimes, objects are allocated either on the goroutine's stack or on the heap. The Go compiler decides which objects go where, but the general rule is that objects that outlive their containing function calls need to go on the heap.

So what actually is in the heap? How did it get there? And who's keeping track of it all?

To answer these questions, we should think about what design goals the authors of the heap memory allocator probably had in mind:

A global mheap struct keeps track of both of them:

Arenas are coarse sections of the available address space (64MB on 64-bit archs). We allocate OS memory in units of arenas. For each arena, there's metadata in a heapArena struct:

Most heap objects live in a span: a run of pages containing objects of a fixed size class: 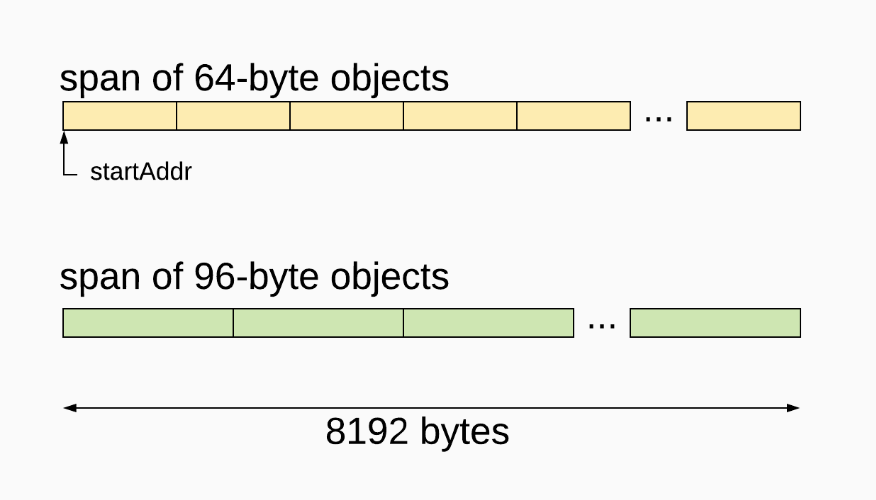 There are ~70 different span size classes.

Each P has an mcache holding a span of each size class. Ideally, allocations can be satisfied directly out of the mcache (so they're fast). In Go, a P is a scheduling context. Generally there's one P per core and at most one goroutine running per P at a time:

To allocate, we find the first free object in our cached mspan, then return its address:

Let's say we need 96 bytes. First we'd look in the mcache for the mspan with 96-byte objects. After allocation, the picture would look like this:

This design means that "most" memory allocations are fast and require no locking! There are just 3 quick steps:

So now we have covered 2 of our 3 design goals for the allocator: (1) Efficiently satisfy allocations of a given size, but avoid fragmentation, (2) Avoid locking in the common case. But what about (3) Efficiently reclaim memory? In other words, garbage collection?

We have to find and reclaim objects once they're no longer referenced.

In a tricolor garbage collector, objects are marked white, grey, or black. Initially, all objects are white. We start by marking goroutine stacks and globals. When we reach an object, we mark it grey: 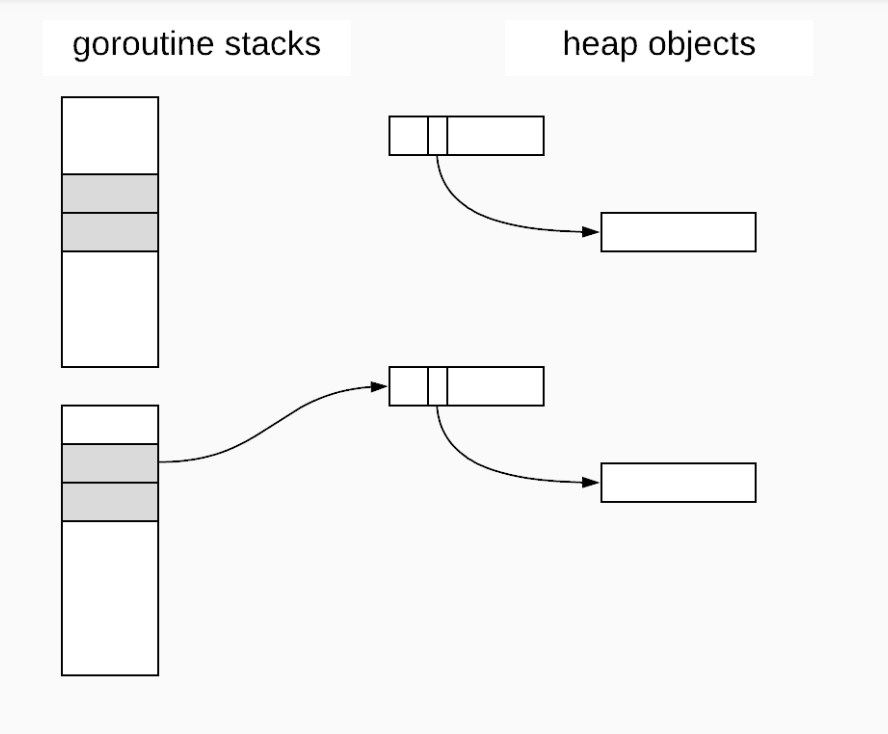 When an object's referents are all marked, we mark it black: 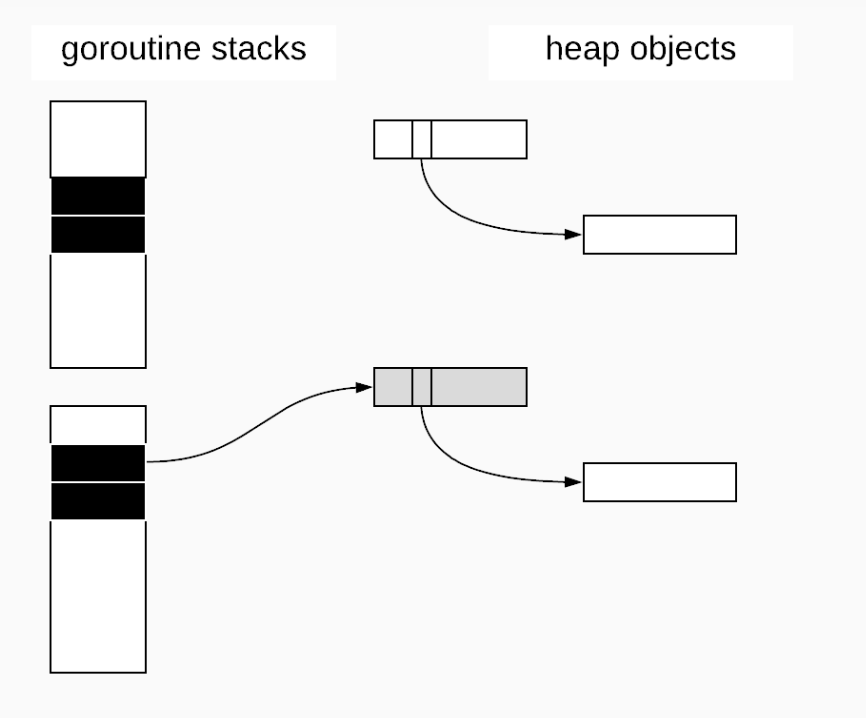 At the end, objects are either white or black: 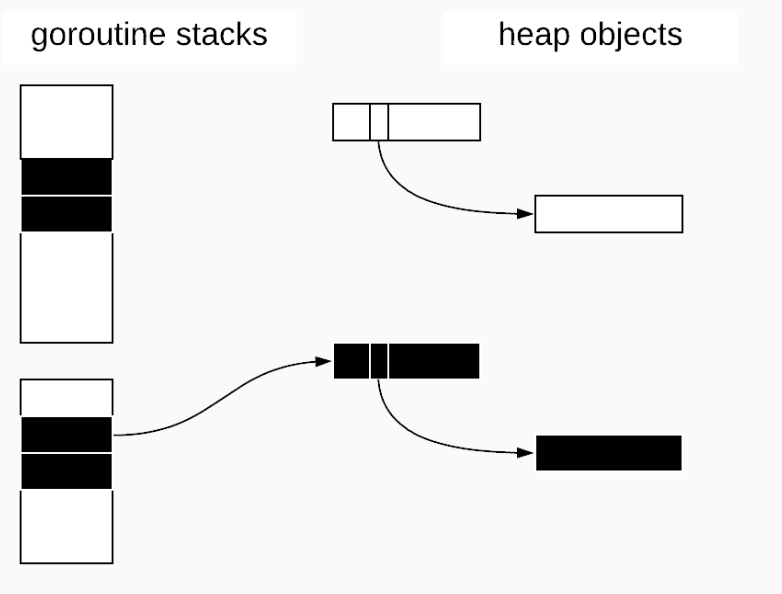 White objects can then be swept and freed.

Go uses bitmaps for such metadata. 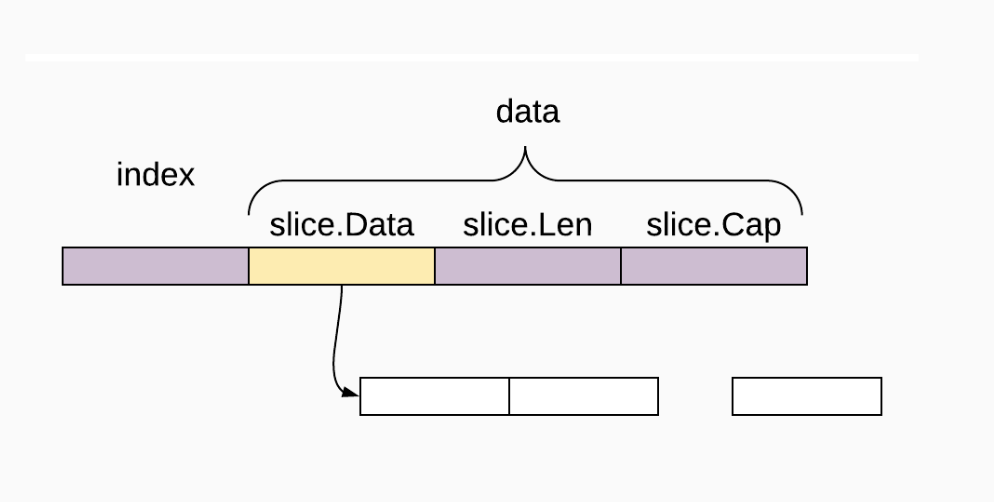 How does the garbage collector know what other objects it points to? I.e., which of its fields are pointers?

Remember that this heap object is actually inside an arena. The arena's bitmap tells us which of its words are pointers: 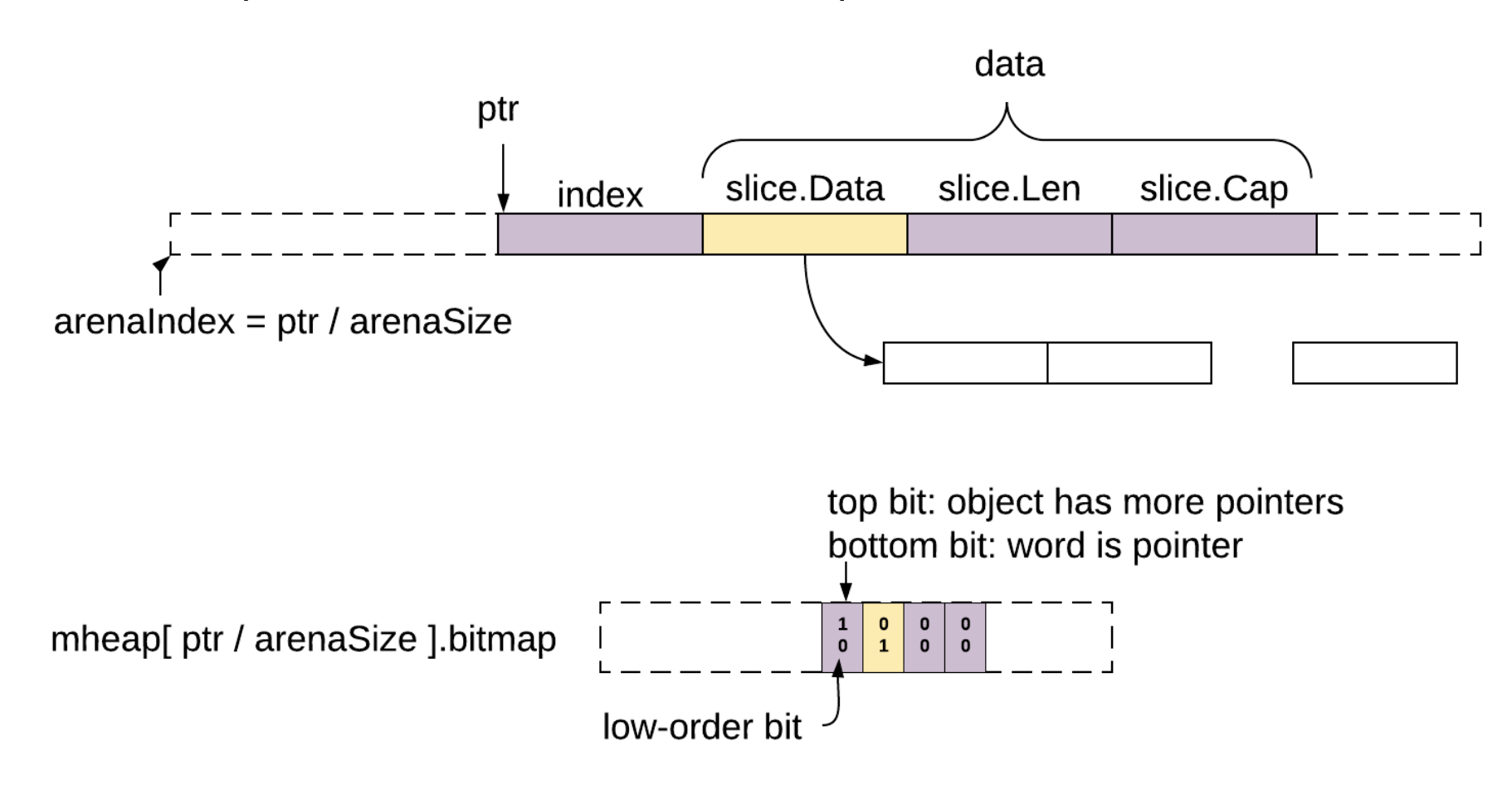 Similarly, mark state is kept in a span's gcMark bits:

Once we're done marking, unmarked bits correspond to free slots, so we can just swap that mark state into the alloc bits:

This means sweeping in Go is generally super fast (while marking adds more overhead and is what we have to be concerned about).

After the first line of the function executes, we could end up with a state like this: 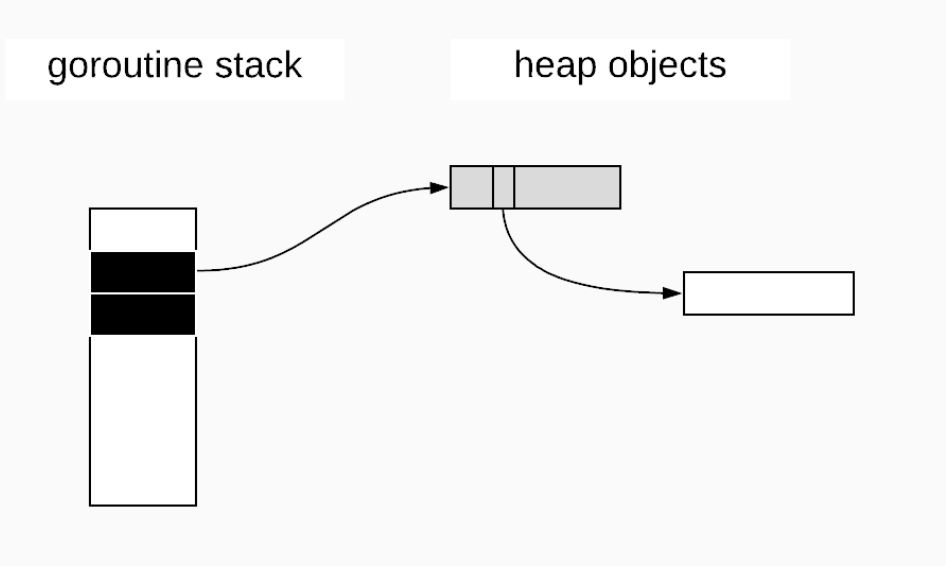 And at the return statement, the GC state could look like this: 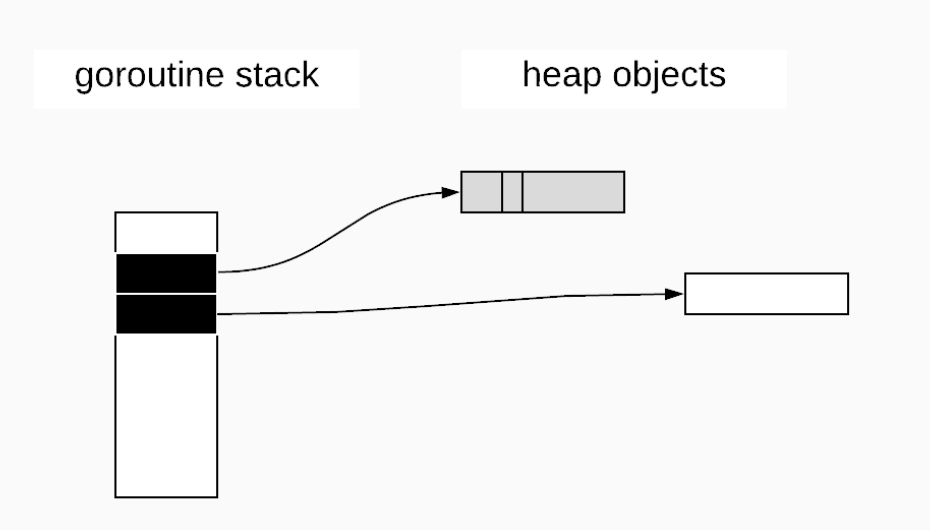 And then the return value would be a live pointer to memory that the garbage collector could free!

To prevent this from occurring, the compiler translates pointer writes into potential calls into the write barrier. Very roughly:

There are many ingenious optimizations in the Go compiler that let this process happen concurrently, but we won't get into those here.

We can, however, begin to understand how marking might be a problem as far as processor overhead is concerned.

When GC is marking, the write barrier is turned on.

During marking 25% of GOMAXPROCS are dedicated to background marking. But additional goroutines can be forced into mark assist:

Why the need for mark assist? A rapidly allocating goroutine can outrun the background markers. So when allocating during marking, a goroutine gets charged for each allocation. If it's in debt, it has to do mark work before continuing:

We've learned quite a bit about the runtime:

It seems like dynamic memory allocation has some cost. Does this mean that reducing allocations will always improve performance? Well, it depends. The builtin memory profiler can tell us where we're allocating, but can't answer the causal question, "Will reducing allocations make a difference?" To do that, we can use three other tools:

If you want to see how much overhead the allocator and garbage collector add, you can turn them off with the following runtime flags: 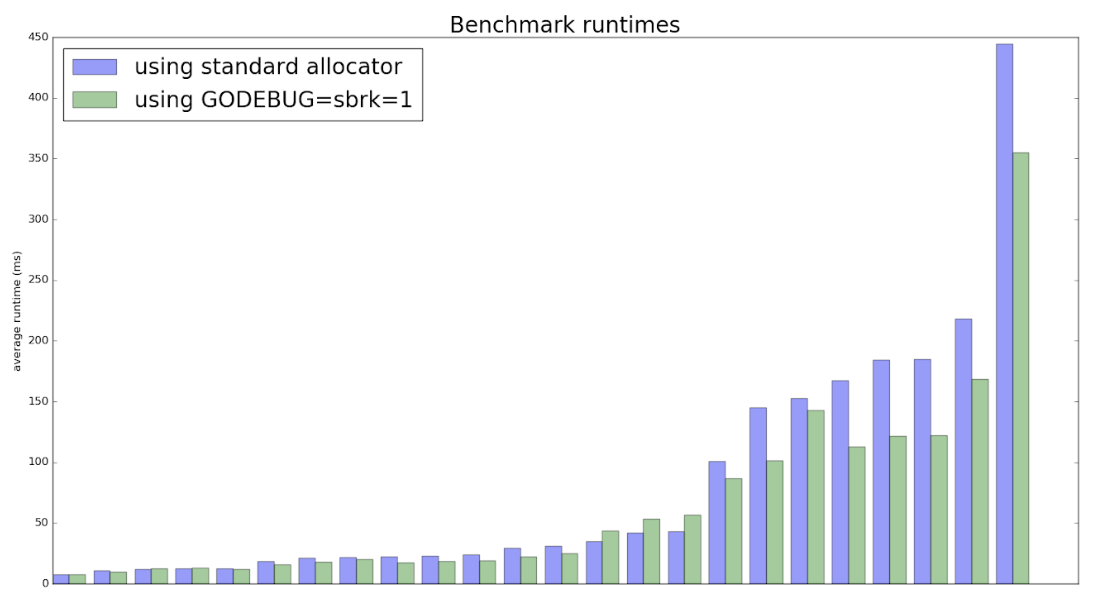 This might seem kind of stupid, but it's a cheap way to establish a rough estimate of possible speedup potential. Maybe 30% speedup isn't worthwhile -- or maybe it's a compelling opportunity!

However, it is a worthwhile first check.

This gives us line-level attribution of where we're doing CPU-expensive allocations, and can help clue us into the underlying cause of GC/allocator overhead.

The execution tracer might be the best tool at our disposal to understand the impact of allocating in granular detail.

You can visualize the output in a web UI:

...though it can be a little dense:

The top-level blue bar shows you at a top-level when GC is running, and the lower bars show what's happening internally.

Remember, top-level GC doesn't mean the program is blocked, but what happens within GC is interesting!

The minimum mutator utilization curve can also show you if a service is GC-bound at different quartiles. ("Mutator" here means "not GC".)

Together, benchmarks with the allocator off, CPU profiles, and execution traces give us a sense of:

What can we change?

If we've concluded that allocations are a source of inefficiency, what can we do? A few of high-level strategies:

What about just tuning GOGC?

Okay, now onto things we can change in code to improve allocation/GC behavior...

The Go compiler can be enticed to tell you why a variable is heap-allocated:

but its output is a bit unwieldy.

^ Why this discrepancy? Because the sneaky time.Time struct conceals a nefarious pointer:

Even though the fast path in the allocator is very optimized, we still need to do some work on every allocation:

That ends up being ~20ns per allocation, if you need a back-of-the-envelope. In some cases, we can amortize that overhead by doing fewer, bigger allocs:

The danger is that any live reference will keep the whole slab alive:

Also, these aren't safe for concurrent use. They're best for a few heavily-allocating goroutines.

A more sophisticated version would use sync.Pool, which

Danger: must be very careful to zero or overwrite recycled memory.

Below is a chart of different benchmarks after successive rounds of optimization (your mileage may vary):

Special credit to Ian Wilkes and many others at Honeycomb: the true masterminds