Peter was at a Prometheus meetup in San Francisco and he lamented on the lack of logging. That lamentation made him wonder why there wasn't a Prometheus buffer log, so he decided to take on the challenge, why not?

In this talk, he chronicles the building of "OK Log" https://github.com/oklog/oklog, a distributed and coordination-free log management system.

oklog is the vehicle that helps drive home his thesis about how evolutionary optimizations made by an iterative cycle of designing and planning first, then implementing code, make optimizations trivial and help him easily build production-ready code.

The important part for him about using Prometheus is operational simplicity, because each node is independent. Logs from distributed systems are usually not aggregatable so the goal is to be able to handle.

Contextual problem: Despite a proper technical description and expertise, we need to define a good product and market fit. "Weeks of programming can you save you hours of planning" -- Hackernews

At the highest levels decided: Behaviors --> Components --> Implementation and then iterate as per "The design thinking process"

95% of the work has already been done as of now, but that came after at least an entire month of planning.

Review the design plan, make the implementation, identify problems and improvements, plan changes and then more reviews. They started with a Filesystem interface definition, and then virtual filesystem definitions then combined all the commonly used disk operations into methods. The fs package is at https://github.com/oklog/oklog/pkg/fs

Metrics in his opinion are more superior than logs. Instrumenting using principles USE and RED --> Update dashboard --> Inspect to see what's missing --> 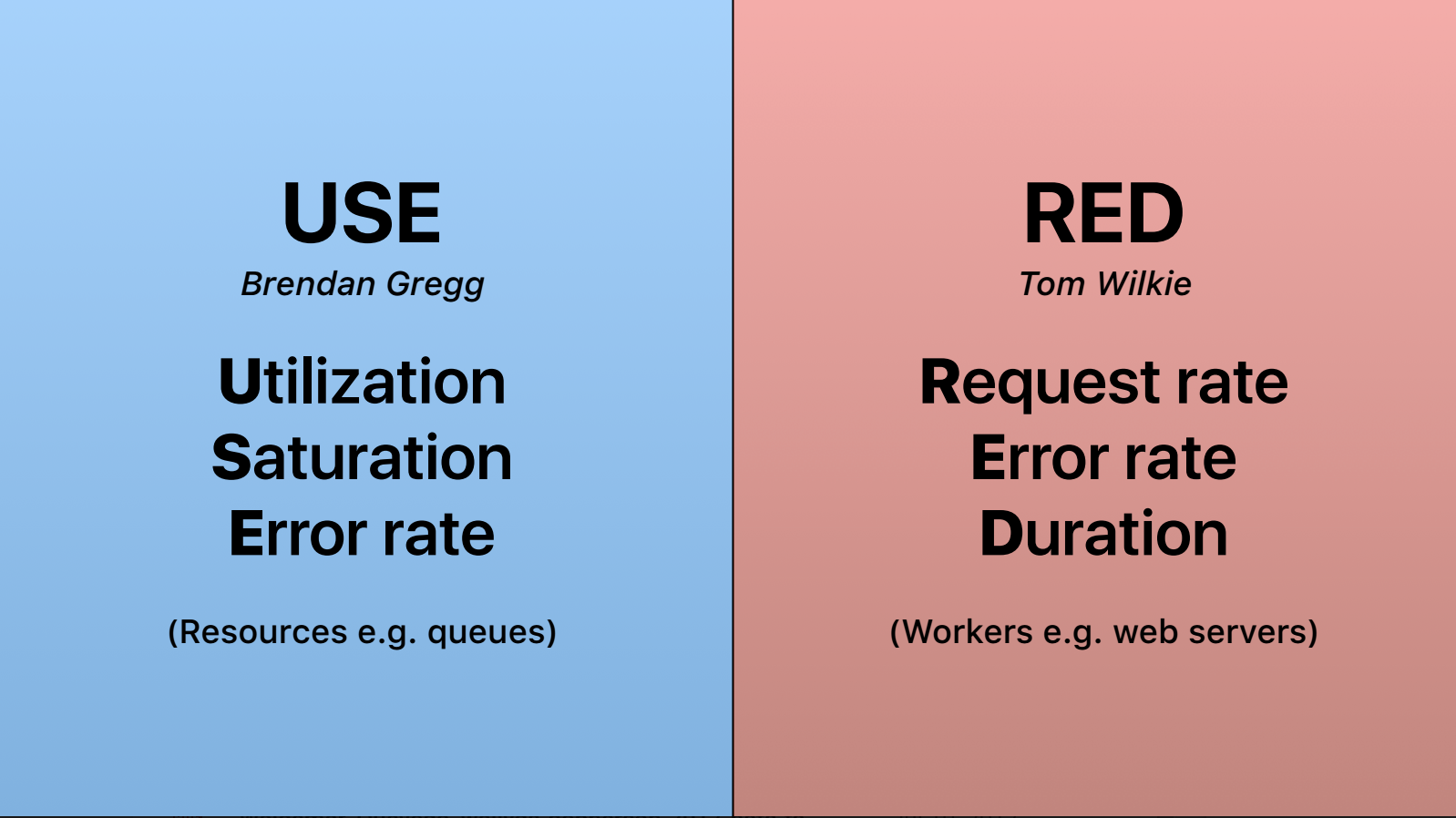 Basic instrumentation helps figure out exactly what actually needs to be optimized. 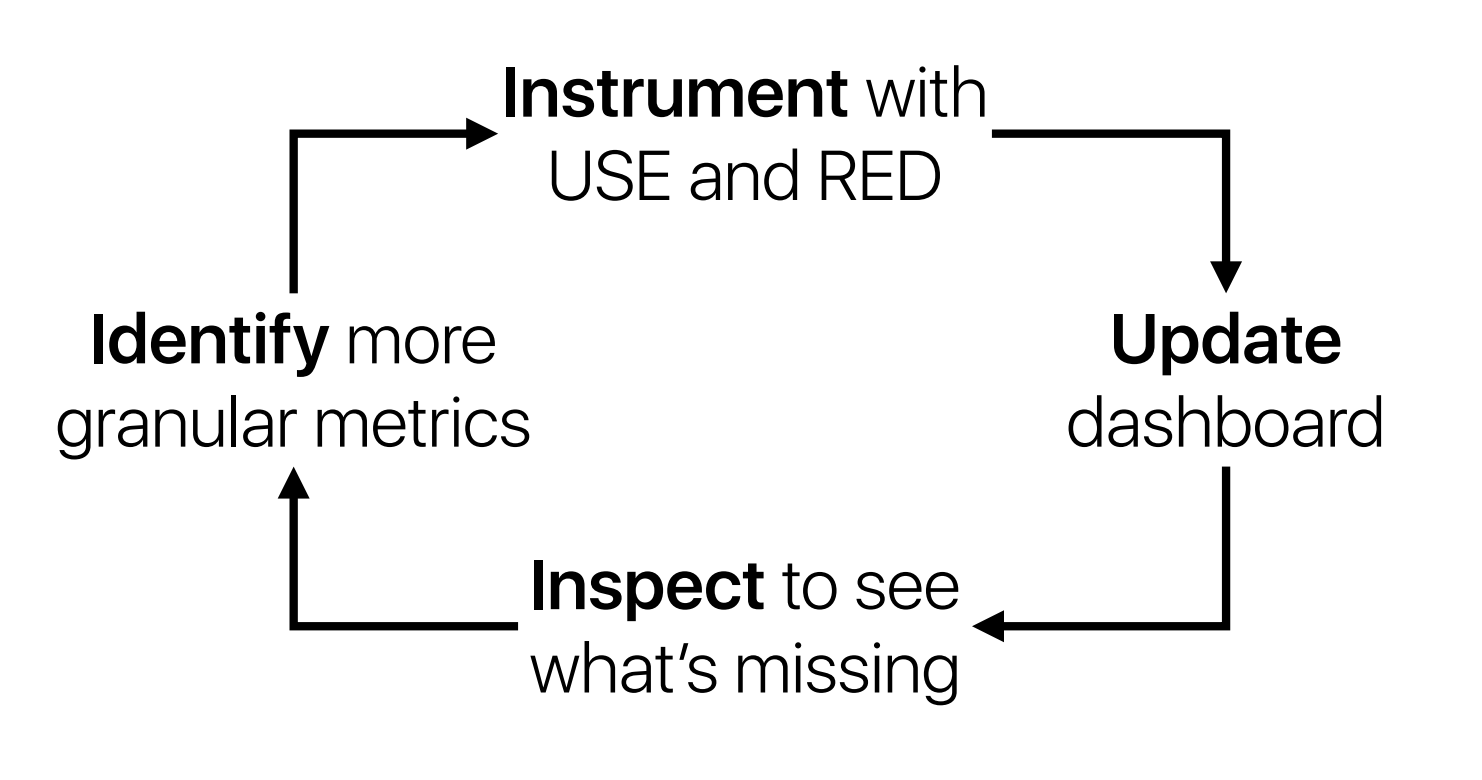 The log generating service was burning a lot of CPU ~48.3% because the log service generates logs at a constant frequency. Profiling revealed that this section was hot:

which was then turned into:

He exposed "net/http/pprof" in his source code. According to him, it's not necessarily always that unsafe to expose pprof in their production code. After profiling, they noticed a lot of CPU burn from strings.Field to extract ulid which are just 26 bytes long. After seeing the call graph, the fix was to replace

which cut down time spent in the offending function from 31.10 seconds to 2.49 seconds. 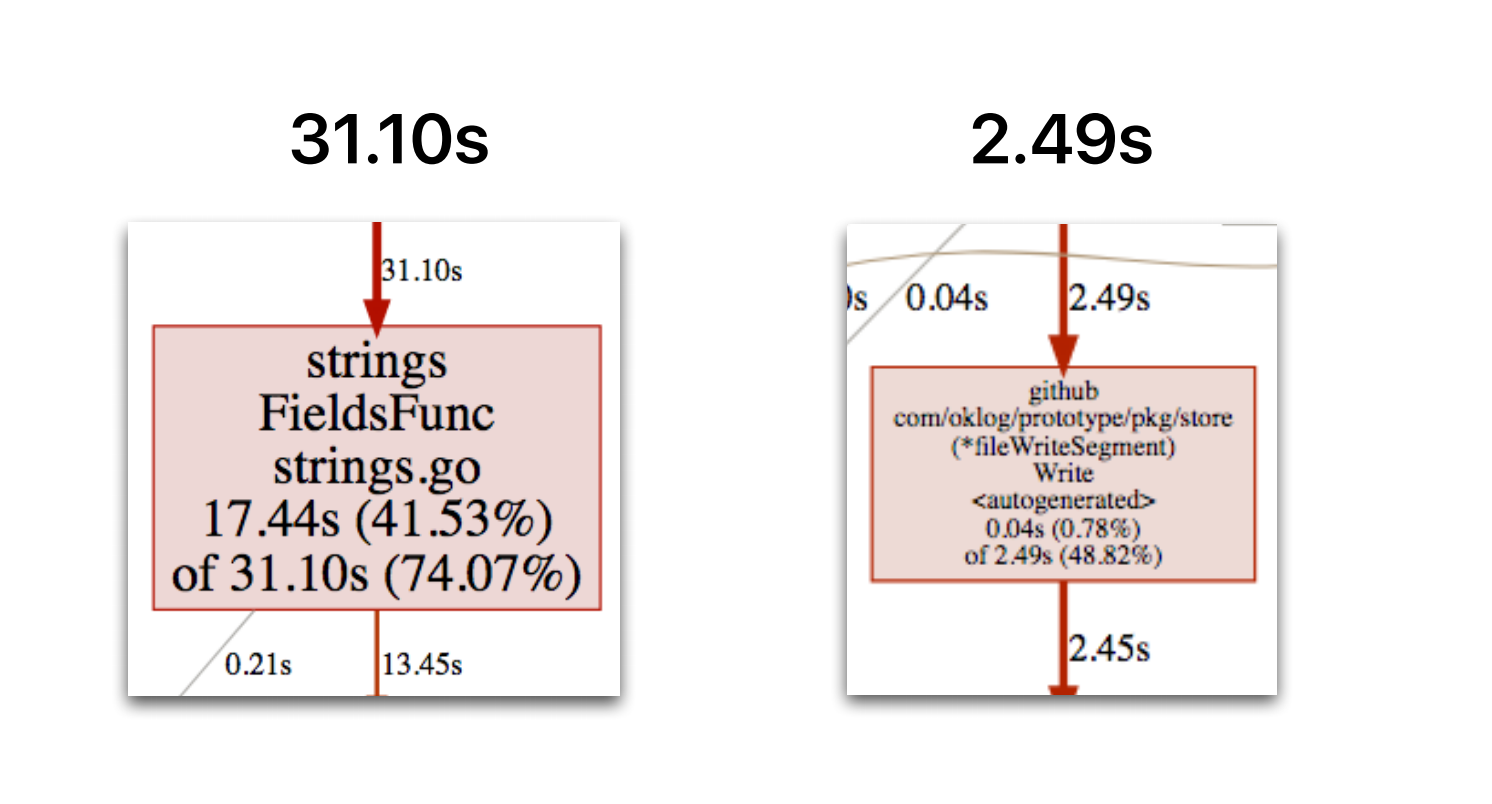 Another profile taken from a higher level provided information to remove and optimize more code related to queries, as you'll see below.

Review of how each segment is stored on disk:

When a query comes in, it's always bounded by a time range e.g T1 to T6. One can select a bunch of segments, merge them into memory and then filter on them.

The program also has a compactor always running, which has the ability to merge segments into one. For non overlap segments, we do a careful merge --> fast merge and then filter.

They then noticed that time was wasted merging records that will never be returned to anyone. Therefore the solution was to implement filtering before the fast merge to gut out a lot of the work.

They then made regex usage opt-in, otherwise use a simple bytes.Contains/bytes.Index as the default checker. Even better, bytes.Index has a very fast assembly implementation in Go thus getting a new mean of 25.81s which translates to a throughput of ~821MBps. 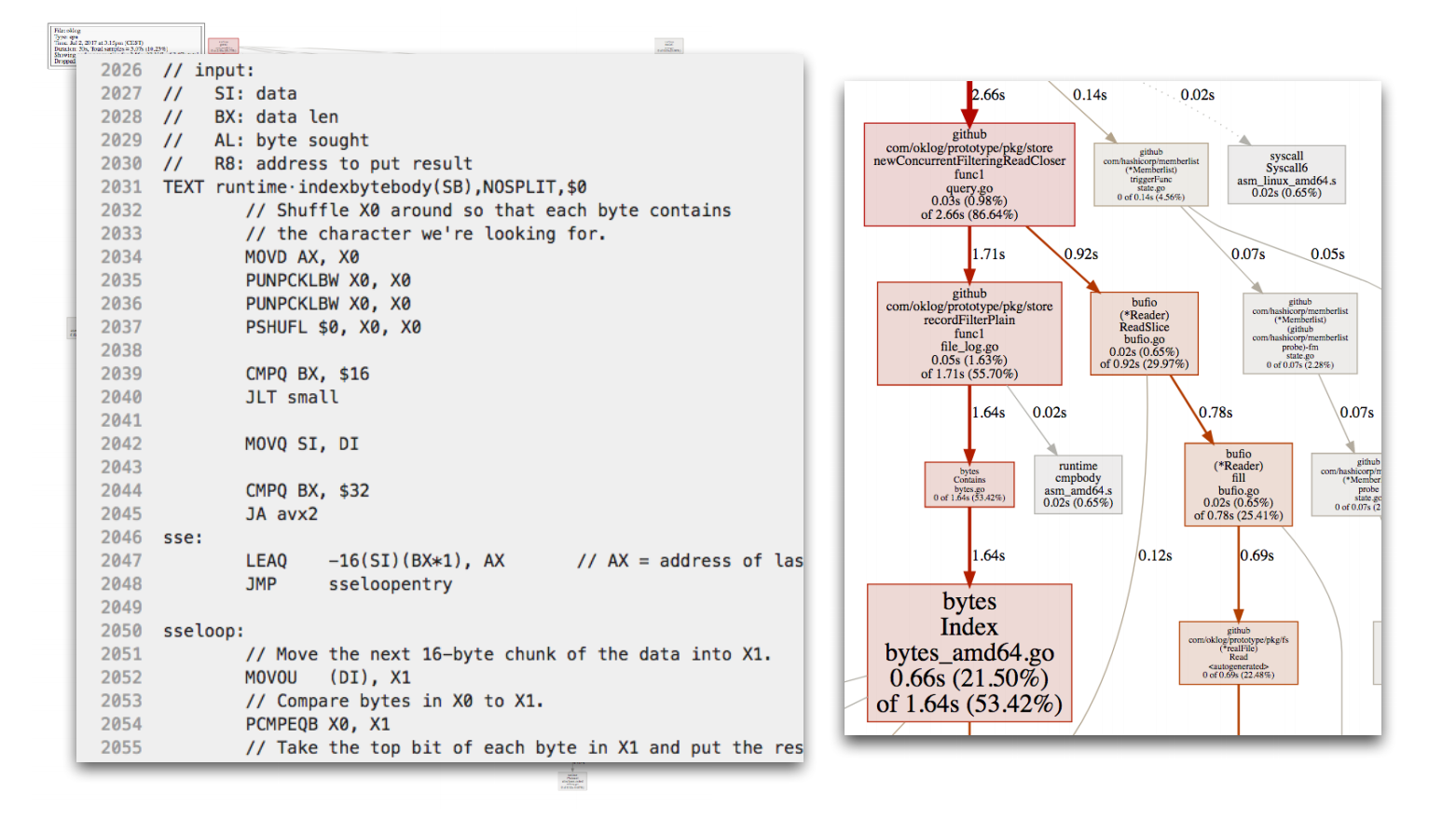 In conclusion, the lessons learned and the results seen while building oklog are hopefully a case to show that without planning and careful examination, they would have spent a lot of time building, but with diminishing returns. Evolutionary design involves revisiting and examining work that was done in the previous cycle. It involves reiterating and revisions of previous, which still enables them to ship a product, yet with continual improvements.