NYC Mesh is a community-run mesh network that helps over three-hundred homes connect to high-speed Internet; making it one of the largest mesh networks in the world. We work with anyone interested in reclaiming ownership over their Internet, but specifically engage with underserved populations including residents in low-income housing and community centers. Built by a combination of consumer-grade materials and donated fiber-optic cable, this network gives people ownership and control over their Internet usage.

Hi everyone, and thank you for coming to our talk! We're Jillian and Michael, and we are volunteers at a non-profit called NYC Mesh.

So, this talk is split into two main sections. In the first section, we'll talk about the social and political realities of internet connectivity in New York City: the basics of the network technology, and the inspiration for our organization, NYC Mesh. In the second half, we'll focus on the organization structure of NYC Mesh: how our volunteers cooperate, how we reach out to and foster community involvement, and how we are trying to increase the overall awareness of mesh networks.

Note: Neither of us are network engineers. We're going to simplify explanations a lot for the purpose of this talk, but that'll get us halfway there.

What is the internet?

The global internet, in a nutshell, is a network of networks. It connects 3.5 billion people - about half of the people in the world.

It accomplishes this through standardized protocols that define how messages should go over the network, and the behavior of the hardware that carries a physical signal. Most networks use fiber optics, copper wire, and radio antennas, but anything that can carry messages and data can be used to build a network - carrier pigeons, thumb drives hidden in sneakers, or planes full of hard-drives.

NYC Mesh builds most of its network with radio antennas.

Many large continental networks are connected with massive undersea cables

Here's an image of the undersea cable network that connects the global internet. This high-bandwidth network of networks forms what's called the "internet backbone". 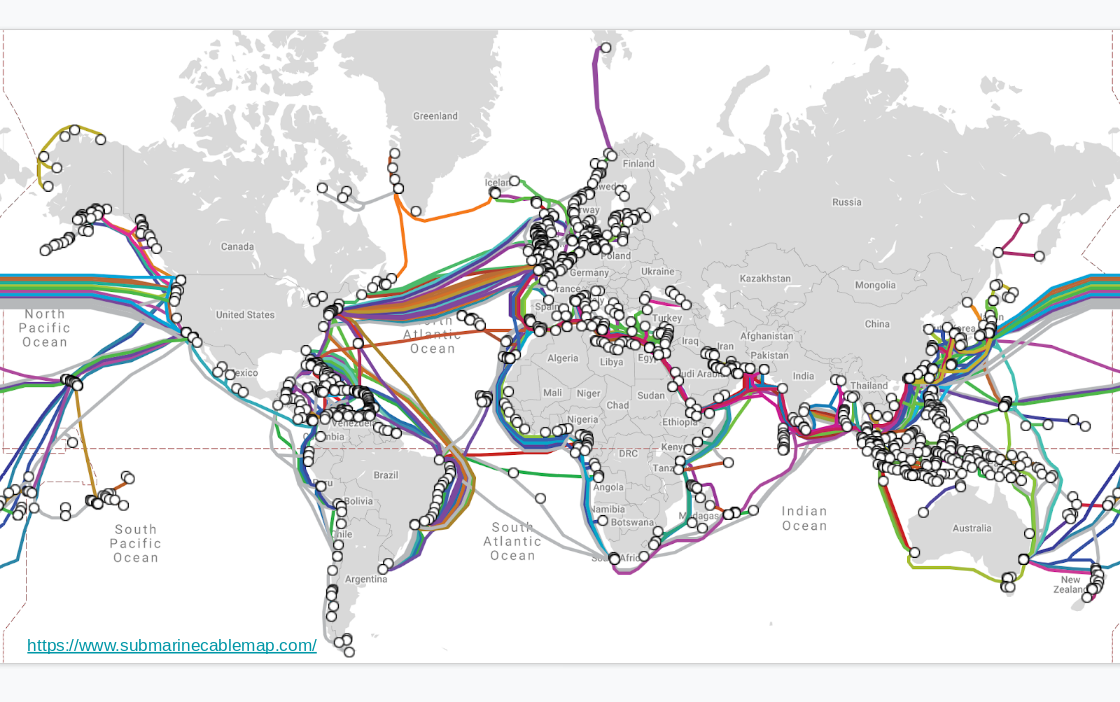 Connecting your own home to this global network is called the "Last Mile Problem", and is the responsibility of an ISP.

What is an ISP?

ISPs started back in the 80s as a competitive market, providing dial-up internet access to end users who wanted to connect to a global internet.

Then, with the dominance of broadband internet access, cable companies had a huge advantage as they already had built direct lines to customers' homes.

With the amount of services that now have moved to the internet, this impacts the ability of poor to get access to critical sevices.

This disparity is called the digital divide. 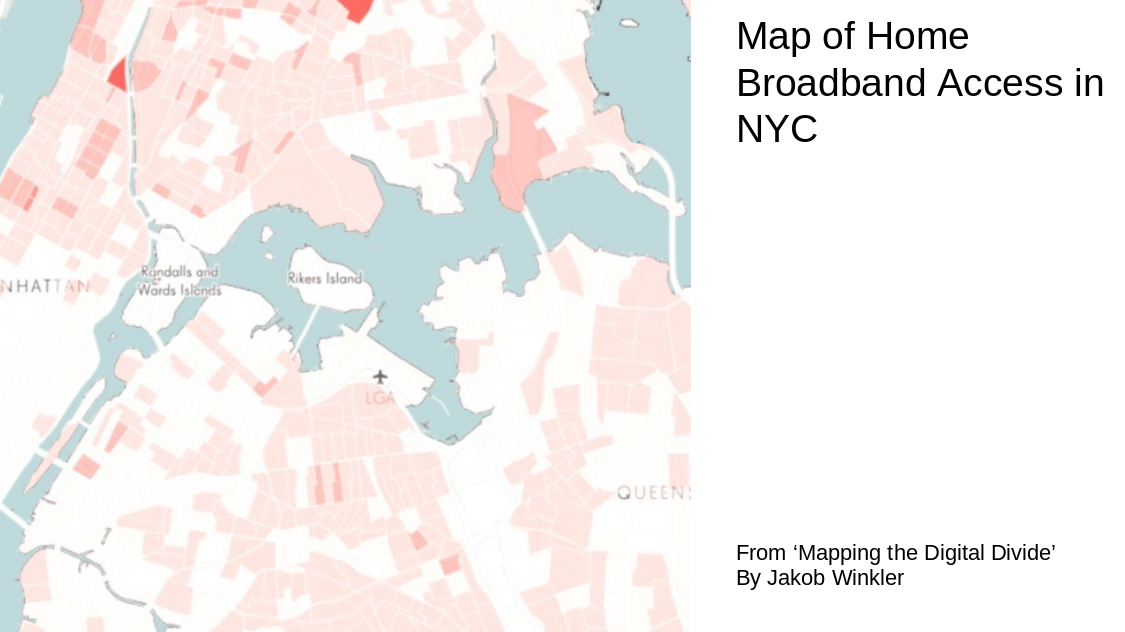 These maps show how limited the connectivity is - red is less. Manhattan is basically white, while the outer boroughs are much less connected. In the Bronx, only 70% of homes have access to broadband.

NYC has "compromised connectivity". Most people have only 1 or 2 broadband providers, and are still at the mercy of their ISPs.

Half of all small businesses in NYC are unable to get gigabit internet - this limits what kind of business can exist in what neighborhoods.

NYC Mesh aims to provide a solution to the shortcomings of ISPs. Rather than being profit-driven, it attempts to be community-driven. It's predicated on the belief that everyone deserves a connection that is high-speed, affordable, and reliable.

"Trust of your internet extends beyond your home, and to the broader community to which you are connected."

We dynamically route through nearby nodes rather than traveling through a singular lossy access point. The idea of a mesh network has been around since the 80s. But, it's only recently that the tech became cheap, available, and user-friendly enough to allow for true community-owned networks. 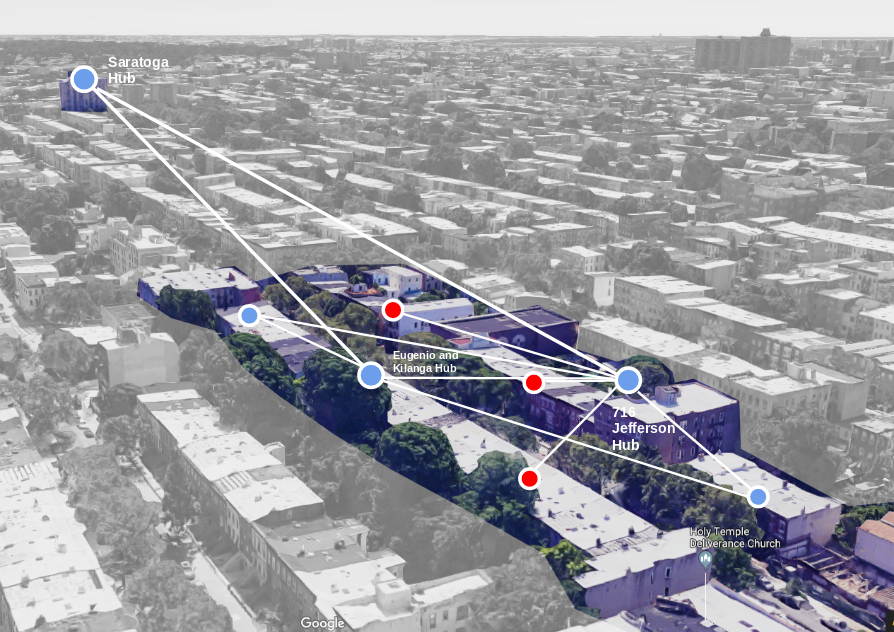 Example: here's how we can add additional nodes in between to offer more resilience across the nodes.

We're not alone! Guifi and others run mesh networks around the world. Guifi has 35k active nodes, and they're located in Catalonia in Spain and they are the gold standard of mesh networks. Catalonia is also famous for grassroots and community organizing.

There is also Freifunk in Germany, wlan slovenija, and WasabiNet right here in St. Louis!

We were particularly inspired by the 4 tenets listed in Guifi's Network Commons License:

Now it's time to take a deep dive into the ways in which NYC Mesh is a resilient network and community.

NYC Mesh the organization is run cecentralized, and we maintain a very flat organization. We are conservative when selecting tools, nad we remain sensitive to hidden costs - money spent traveling to install sites, and human time costs in operational complexity.

Regarding being tied into the community - we engage in outreach to try and increase engagement, turning end-users into hobbyists into activists.

We host monthly events, and try to focus on education.

"When I went out and did the first community outreach, it became clear that people really just wanted a cheap internet, and didn't care about the greater mission so much."

I also believe that building a diverse community is important and that we should make this kind of mesh networking is available to people who are not very technical.

We try to create opportunities for people to contribute that highlight their own individual strengths, regardless of whether or not those are technical. We also try to encourage new people to take leadership roles in areas that align with their passion and vision.

Breaking down the barriers to entry

Running an organization this way is really hard - not everyone has the time required to volunteer, how do we keep those people relevant?

We run organizational meetings with frequency, but we changed how they were run over time. It used to be at a bar, which was intimidating to people who didn't feel comfortable with drinking, and there have been other observations like that.

We now don't do that any more because it was exclusionary. We hold our meetings in a common community space.

Our org meeting this past month, we had folks from the Queens Digital Tech Lab present, which is one of the ways we try to collaborate with other organizations and build community that way.

We want to keep these meetings productive, and try to always leave with a project plan.

Also, a lot of attendees don't have internet - we try to make sure that all of our materials are accessible both physically and digitaly.

We also run general classes and talks - try to keep the messaging oriented around event and non-profit oriented so as to not scare away people who are intimidated by attending a tech event.

There's a mentorship model - Install Leaders take Install Novices with them on node installations. After a number of node installations, Novices get promoted to leaders and can carry on the tradition. This is part of the install leader trainings. There's also a classroom style process where they teach people how to run these installs.

Group Installations are a way for people to get past the idea of the daunting learn This one on the left had 70 attendees. At least 30% of the people there have been actively engaged in other projects.

Photos of new members, happy volunteers. They historically have little to no training and are exciting about where they're connecting to and building a sense of community.

We cover a wide variety of buildings, from 4-story walk-ups to entire apartment complexes. The Saratoga node, a housing unit run by the NYC Housing Authority, is our first foray into public-private partnerships. 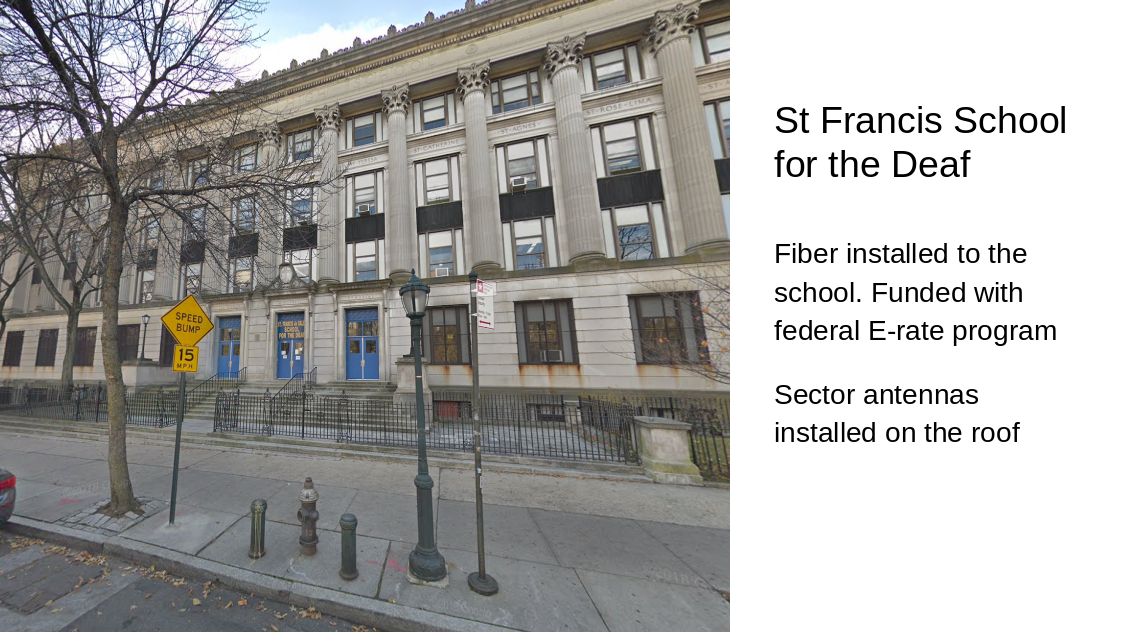 This picture was taken at the St. Francis school for the deaf, which we've helped get on the mesh.

People are chomping at the bit. In Queens people have stopped waiting for us to be ready and are just willing to go and build their own mesh. We are trying to figure out how we're trying to meet that demand for leadership.

Smaller scale group installations in the Greenpoint network - we're getting connectivity and meshing happening in the neighborhood over the summer.

We are lucky to be in NYC, get lots of free journalism. People like free or affordable internet, it's a great conversation starter.

Our outreach surpasses NYC - we have a Slack group. There are other people around the country curious about how to build mesh networks. We invite them to reach out to the Slack group. We also go to conferences to share our learnings, like Strangeloop and BattleMesh.

BattleMesh started off as a big conference of mesh protocols to compete with each other, but now has more of a collaborative learning atmosphere.

We've learned a lot. We're good at surviving on a small amount of money. We're the only self-sustaining community network. We've been able to scale up volunteers over time. Interest has spiked since the repeal of net neutrality. 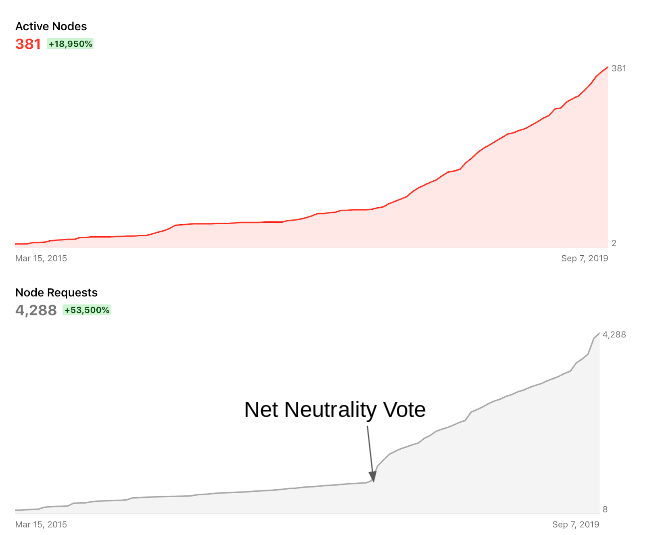 We still have problems, though! We haven't figured out how to structure ourselves as a distributed organization. We're not sure how to secure funding. We don't know how we're going to be able to hire employees, and pay people for their work. We're also still really bad at reaching consensus.

We're hoping that once we reach 1000 nodes, we might be able to pay some people for their hard work. We're also open to hosting applications on the mesh network that empower the local communities, like chat and emergency response.

We can take a few qustions but just a reminder: We are not network engineers.

Audience 1: How does a decentralized organization sign contracts / function with other ISPs?

J: We used to be project of the internet society ISOC, and they were the fallbacks for that. However it still relied on individuals for that. We're in the process of applying for a 501c3 so that we can be our own organization. We're trying really hard to not centralize the organization for this. Specifically, establishing a board has been really tricky.

Audience 2: Do you have plans for how to reduce your reliance on ISPs for longer-distance connections?

M: Short: no. There'es always going t obe longer-distnace issues where ISPs are going to be things. Maybe we can join with a regional mesh network.

J: Another issue is being located on backbone, where we're located, NYC, doesn't have much connectivity.

Audience 3: Do you have a relationship with HUD (NYC Housing and Urban Development)?

M: We try to! NYC is very beauracratic. We're hoping that Saratoga is an experiment in that space, trying to show we're reliable. Howvevr they are already contracting with Sprint.

Audience 4: What's the cost of a typical node install?

M: We're Ubiquity fanboys, for lightbeams they run about $110. For Hub nodes its about $160. That's for the sector beams that need to travel a few hundred feet.

J: We try in our installation price to offer a $50 volunteer fee. We try to subsidise installation fees and help out other people. It's a volunteer thing, so if people

Audience 5: Can you talk about how you patch your network and that sort of thing?

J: We're compromisable over physical sitations. We are password protected. Our general guidance is to keep your network transmission as secure as you would in a coffee shop.

Audience 6: Have you had to overcome organized opposition? We had to tear down the mesh network in Seattle because it was being part of a camera - so mesh network has a bad taste there.

J: This is where our education plays into this, and teaching how the tech works. For example, we're trying to combat the notion that we're just a tool of the police because we're not associated with them at all.

Audience 7: Have you developed strategies to maintain a non-heirarchical organization?

J: This is where we tie in to working with neighborhood groups. It's definitely challenging. It's still a work in progress. It's something we're working on this year.

Audience 8: You said you're fearing the day that ISPs notice. What happens when the FTC makes this illegal?

Thank you for coming to this talk!

This talk was originally given at Strangeloop 2019.