Chris @chris_csguy is a Principal Engineer at Comcast and has been doing Go since 2014. He's contributed to Go Kit and Go itself, and is a meetup organizer.

This will basically be an experience report from their project, using Go to stream video at Comcast. Despite the title, there's no actual death involved!

We've all used it: you choose what you want to watch, you press play, and you get your show. But lots going on under the covers.

There are several ways to do VOD:

Today we're talking about the part of the process called the pump. It runs on "real hardware", not in the cloud. It reads from a local cache (which reads from an internal CDN (content delivery network)), and sends to the network. It reads from the cache in ~1M chunks via http requests.

So the pump takes the 1M chunks of data and chops it up and sends it out.

So ya gotta be punctual!

With Go 1.9, had to run five pumps per server to handle full capacity.

But ... didn't really dig into why they needed five pumps. This becomes important later.

So they went immediately to pprof, as one does. (Pprof is the Go profiling tool.)

Quickly found that runtime.findrunnable (and the things it calls) was using 2x the CPU in 1.11 as compared to 1.9.

Time to do some digging into the Go scheduler

[What followed was a lengthy explanation of the Go scheduler and how it interacted with their code.]

At the root of it was that when you start a new goroutine, when it has to start a new thread, the thread calls findrunnable to find a goroutine to run on the thread. (findrunnable is the thing using so much more CPU time than before.)

findrunnable can perform a process called "work stealing", which looks in other threads' run queues for runnable goroutines. Since scheduling is a very dynamic process, if it doesn't find anything, it does that three times in a row, in case something new popped up on one runq while it was searching in another runq. On the fourth pass, it'll look elsewhere, in other threads' "runnext" slot, and (if no other goroutines exist) finally steal that goroutine from that other thread.

So what happens if you're trying to start lots of goroutines? In general you get as many goroutines as you have threads pretty quickly.

The Go Scheduler and Timers

Go has a timer queue. This is where goroutines go to sleep. Go 1.9 has a single timer queue. (That's foreshadowing, haha.)

So a goroutine calls time.Sleep() for 1s. It goes into the timer queue, and Go starts a special goroutine called the timerproc. The only way it's special is that the runtime starts it; other than that it's a regular goroutine, and gets scheduled (or not) like any other. Its job is to wait for timers to expire and do whatever's supposed to come after that, typically waking up a goroutine. It does that by using an OS primitive to sleep until the very next timer needs to wake up, and then proceeding. To sleep, you need a thread, so it creates a thread to sleep in.

And then there's a bit of a dance when goroutines go to sleep and wake back up again, but generally things work pretty well. In particular, Go is pretty good at not having threads sleeping when there are goroutines available that want to do work, which apparently some other language aren't as good at.

So back to that commit we talked about ...

So why did that result in more CPU used?

They thought, We can go to sleep faster, but that means that more threads are doing work stealing (which can use CPU time), so maybe that's what's happening?

So this actually helped them to understand why they needed five pumps on a server:

But still curious as to root cause. So they filed an issue with the Go project. Description, example code, pprof output, and so on.

But they tried that and it didn't work.

(And this was all spread out over months. Lots of experimentation and exploring and thinking.)

In a single stream, ideally, they send a packet, which takes 0.01ms, and then sleep for 2.34ms. That's a lot of intervening time. Which is good, because they service lots of other streams in that time. But all that sending happens more or less at random. So all the "not-sending" is sleeping. So they have lots of little sleeps. Which means lots of work stealing. Which means lots of context switching to wake up. And that's lots of CPU for nothing.

So how could they sleep less? What if they could group all that more-or-less random sending into chunks, back to back, so they wouldn't have to sleep?

What if they could change this

So they tried two prototypes. The first led to the second:

Create GOMAXPROCS packet scheduler goroutines. Each requests a time range to send their next packet. Find a bunch of packets in the same range. Send them out all at once without sleeping. Sleep until the next group needs to go out.

If their goal was just to get everything grouped in time ... what if they just woke up all the goroutines at the same time?

This is their initial cpu usage graph. Bottom axis is # of streams, and left axis is CPU usage as reported by the os. Note the "hockey stick" starting about a third of the way across the graph. 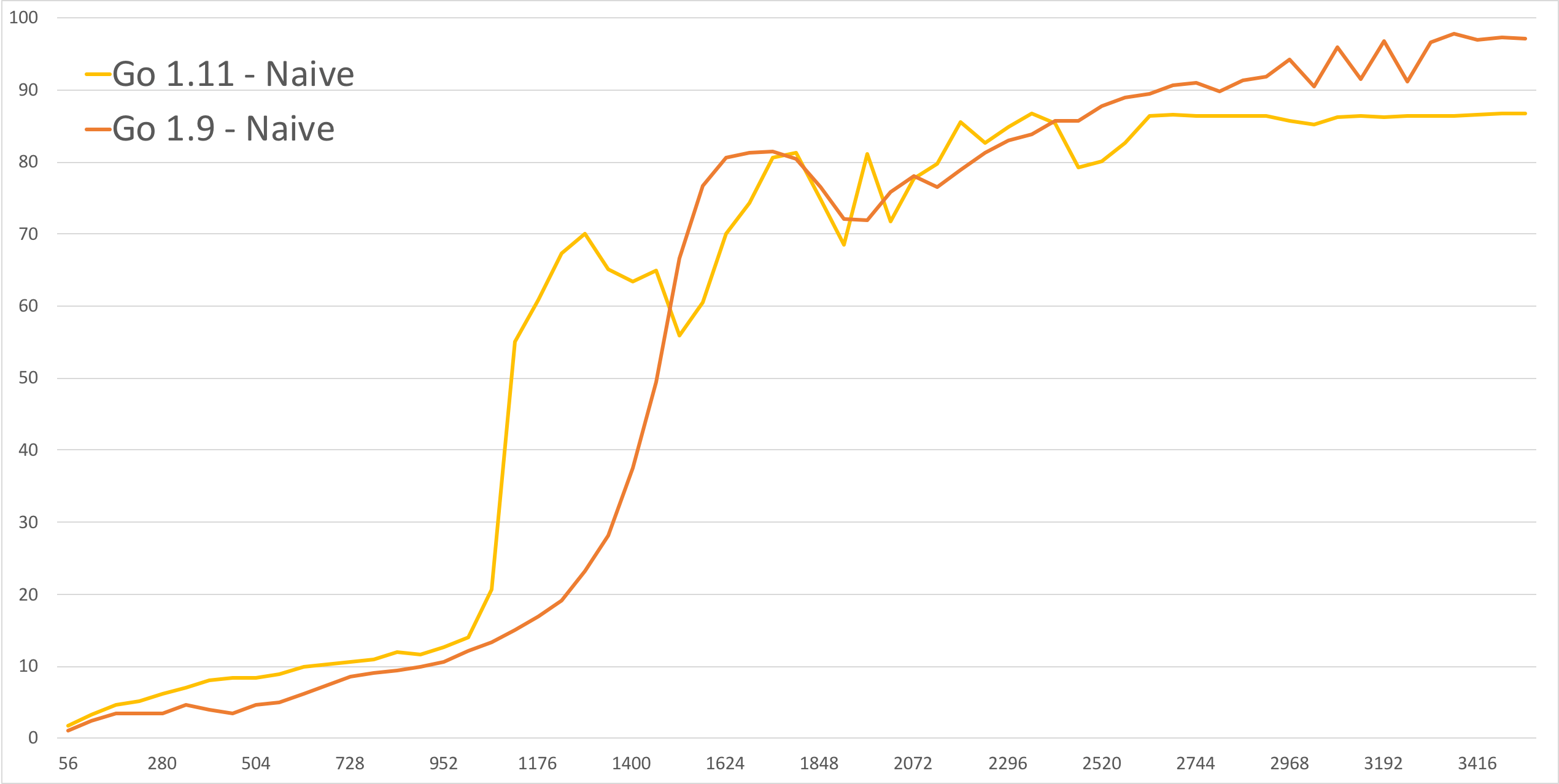 Implementing the synchronized wake-up took 15 minutes; it was literally a one-line change: add time.Truncate() to the wake-up time. 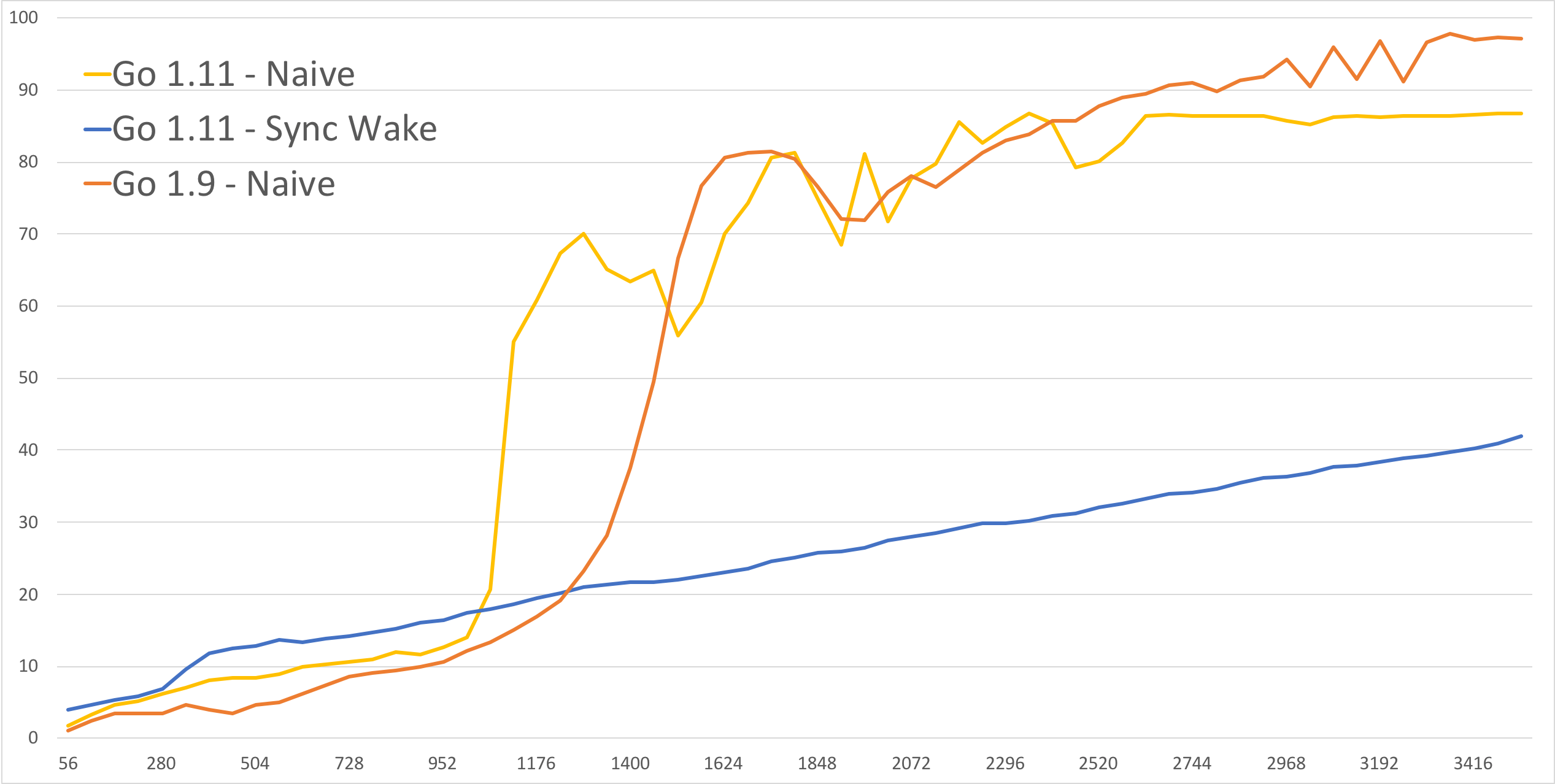 So now there's no hockey stick behavior, and it does a much better job on the high end. Weirdly, on the left, it's worse, which was surprising, and they don't know quite what that means. And there's that little hump on the left, too. ??? But shrug this is the real data.

So anyway, then they got their multiplexed idea implemented, and they got this: 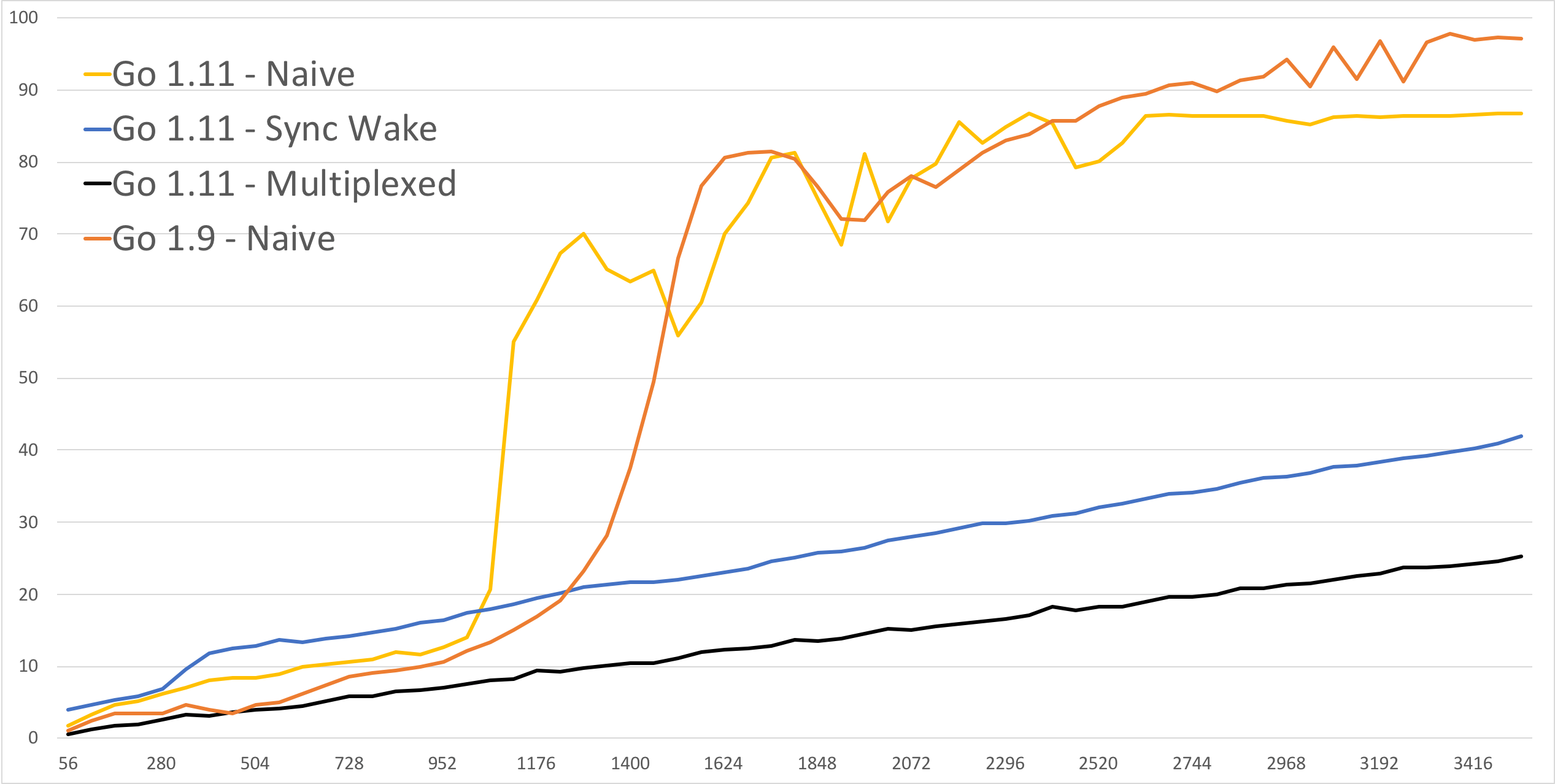 So now they're better everywhere, and they're nice and linear.

So went forward with the multiplexing approach, since it was better on all measures. Except complexity. So they documented it and added unit tests.

All that was in a prototype. Then it was time to integrate with their actual production code. Some hiccups there:

But about two weeks ago they got this all working and into the QA environment, tried it with a completely cold cache, went to full load, and ...

They were at 40% CPU usage on the box at full load.

All the pumps, all the caching software, everything. It was great.

Ian Lance Taylor is rewriting timers, again. Argh. But they got their hands on that branch and tried it.

Bottom line, it eliminates a lot of context switching when a goroutine wakes up.

The benchmark numbers at the end of Ian's commits are ridiculous. 95% improvement on some functions in the time package.

So they tried Ian's branch with their tool. Separate goroutines for every stream. The bad one is Go 1.11, and the bottom line is with Ian's new timers, without any special multiplexing on their side.

Has many of the properties of their multiplexed implementation, but if you look carefully it starts to bend a little upwards at the end.

Here's their implementation, with the new timers, both "naive" and multiplexed. So theirs is a couple percentage points better, but it's mostly "in the noise".

So could they just throw away their multiplexing code when 1.14 comes out? Maaaaybe. But their approach lets them use ipv4.WriteBatch, to send lots of UDP packets with one system call (on Linux). An order-of-magnitude fewer system calls sounds good to them! But they haven't tried it yet, so that's upcoming.