Minimal version selection has a lot of nice properties:

Many other popular dependency managers, like NPM, prefer to install the latest version of dependencies by default. I will share a recent real-world example of the kind of pain that minimal version selection prevents.

Sourcegraph recently open sourced our browser extensions, but before we could, I needed to remove a transitive Go dependency on our private icons NPM package that contains licensed assets.

Codeintellify provides hovertooltips on code. Both our web app and our browser extensions depend on it.

The task of removing codeintellify's dependency on our private icons repository was straightforward because it was only using a single loading spinner. All I needed to do was create a NPM package for our open source loading spinner, update codeintellify to use the new package, and finally update the browser extension to depend on the lastest version of codeintellify: 3.6.0

Renovate Bot noticed that there was a new version of codeintellify so it helpfully created a pull request to update our main repository to codeintellify 3.6.0. 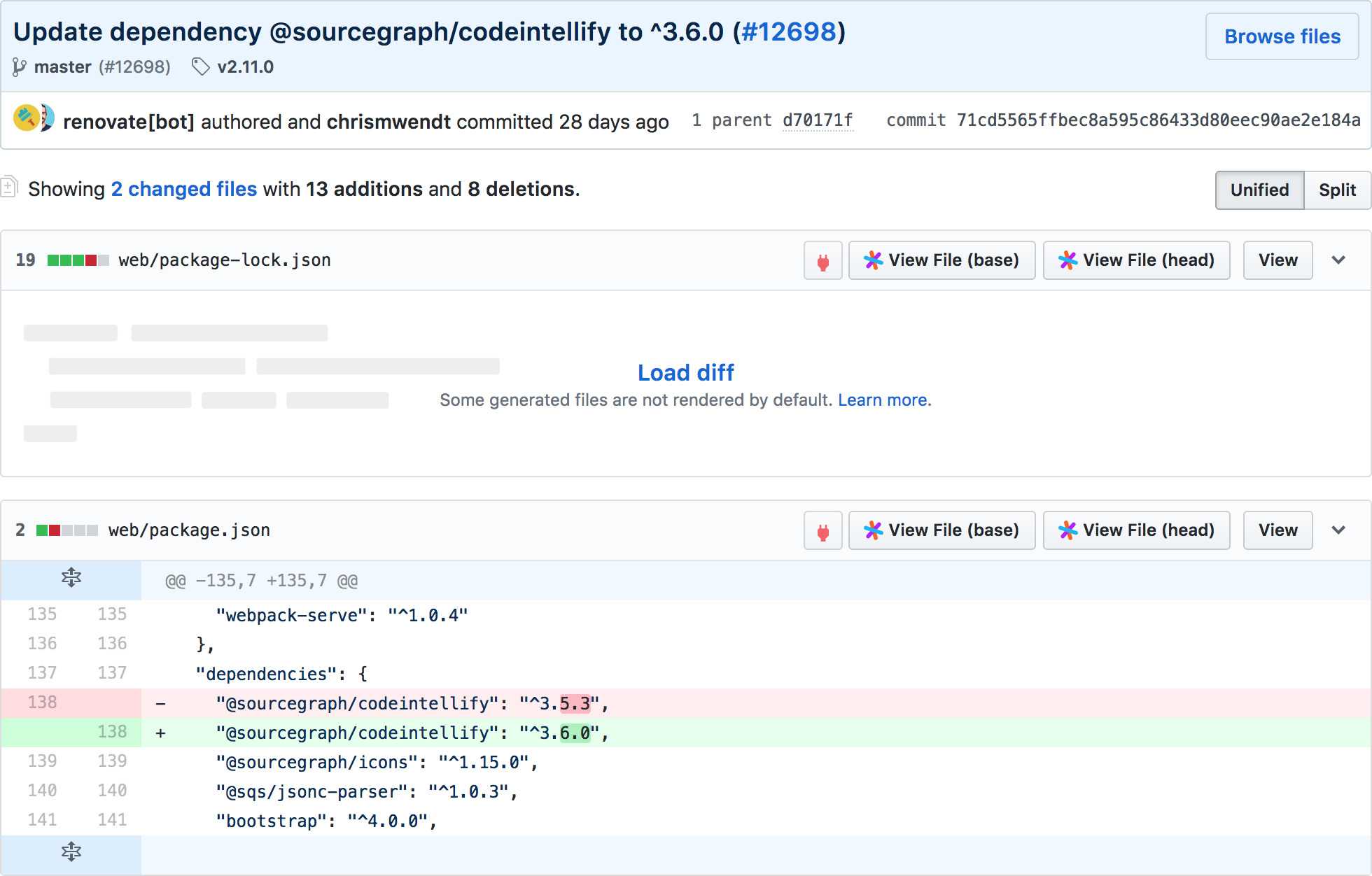 After CI passed, another engineer merged the pull request. Soon thereafter, our end-to-end tests (that only run on master after deploying to our staging environment) started failing because hover tooltips, a core feature of Sourcegraph, were broken.

Fortunately, the end-to-end test failure blocked this from being deployed to sourcegraph.com.

Since I was asleep at the time, and the breakage was apparently caused by codeintelify 3.6.0 (and transitively, me), my teammate just reverted the commit.

When I arrived to work the next day, I was confused. What could have possibly gone wrong?

After scratching my head for a bit, I went back to look at the diff and realized that GitHub had helpfully auto-collapsed package-lock.json. Of course I don't need to see that; it is for machines, right?

I expanded the diff and my heart sank. 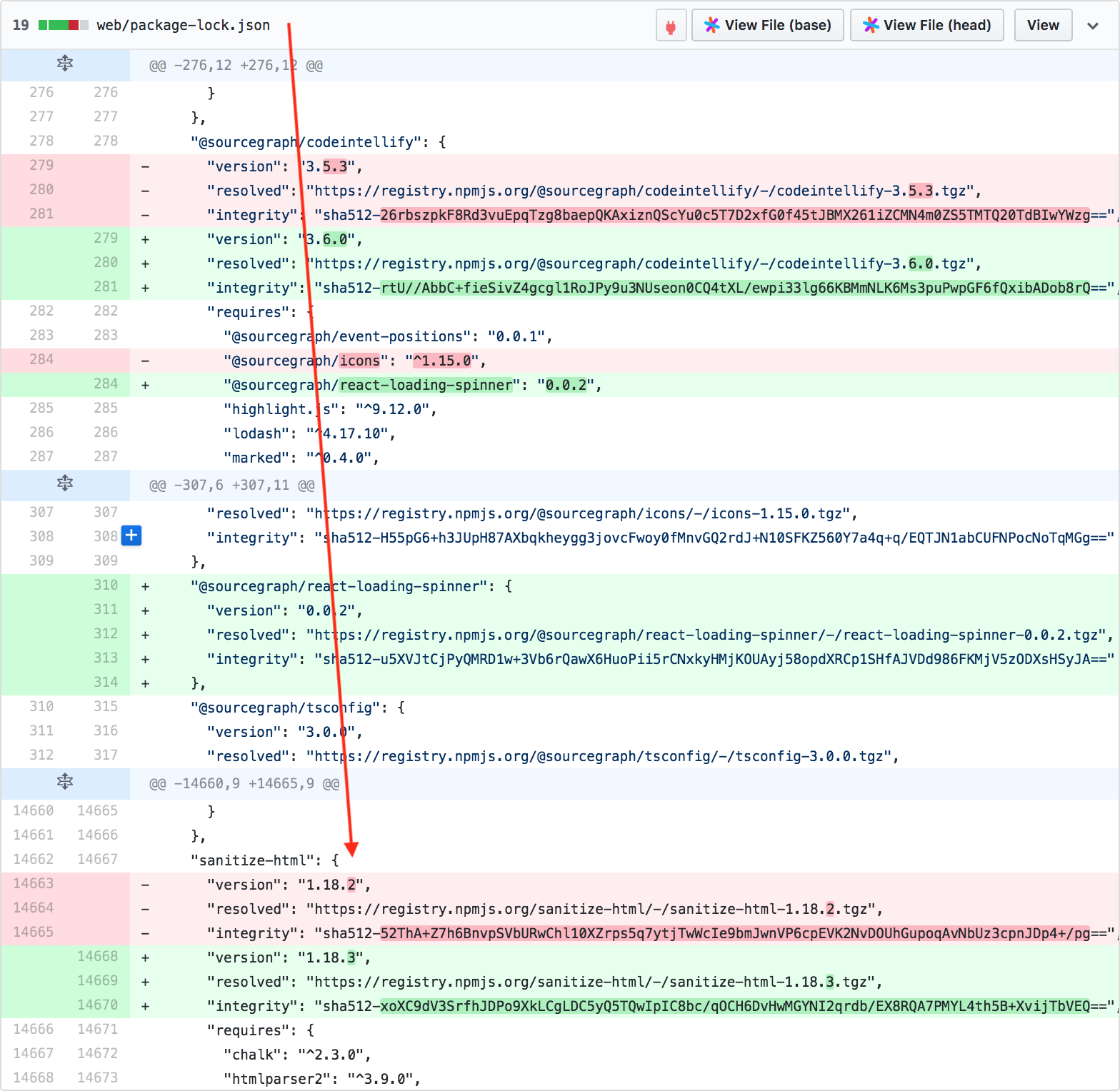 NPM had "helpfully" seen that there was a new patch release of sanitize-html and upgraded to the new version even though sanitize-html had no relationship to the package that Renovate was updating.

I was upset. Not with sanitize-html though; people make mistakes. In fact, I assume that people will make mistakes (in this case the mistake was quickly fixed in 1.18.4, and I was able to move on with my life).

I was upset because the design of NPM assumes things that just aren't true in general:

To the contrary, I expect NPM and tools like it to:

This experience was the most benign manifestation of this problem. It would have been worse if any or all of the following were true:

I am happy that this class of dependency problem won't exist with Go modules, and I hope that other package managers evolve to solve these problems.

Special thanks to Felix (@felixfbecker) for ensuring that end-to-end tests must pass on staging before deploying to sourcegraph.com, discussing minimal version selection with me, authoring a tool to create new NPM packages with the right boilerplate, searching for workarounds to get the behavior I want out of npm, and ultimately filing detailed issues to drive change in the ecosystem (#1156, #2348).