We just raised a $125M Series D (led by Andreessen Horowitz) at a $2.625B valuation to bring great code search to every developer. This major milestone was made possible by the hard work of our amazing team members and by the hundreds of thousands of people who now use Sourcegraph.

Though we have a lot more users than we did even a year ago, the proportion of developers who understand the value of great code search and the impact it can have on dev productivity and happiness is still relatively small. We’d like to take this moment to share why we think code search will become ubiquitous and highlight some of the things we’ve been working on at Sourcegraph to make it so.

Forward-thinking software organizations have long appreciated the value of code search that extended beyond the boundaries of the editor and dev environment. Organizations like Bell Labs in the 1980s, Sun Microsystems and Linux in the 1990s, and Mozilla, Google, and Facebook in the 2000s built code search engines for their own teams to make their massive codebases accessible to every developer and enable permissionless knowledge sharing.

These days, every company is becoming a software company, and everyone is reaching the scale of code where the need for search becomes apparent. The world of open source has exploded and the number of dependencies pulled into the average codebase has ballooned. There may no longer be such a thing as a small codebase—even boilerplate starter projects often require dozens of dependencies from the get-go. All these become part of the overall codebase, which developers must understand if they are to effectively build, test, debug, and deploy the code into production.

We could try to boil developer productivity down to a scientific-sounding set of numerical metrics, but all such measures we’ve encountered seem deeply flawed in a way that confuses the creative essence of programming with the spreadsheet mechanics of a widget factory.

When we think about developer productivity, we think of developer happiness. The value that great code search brings to organizations—in the form of human time saved, reduced downtime, collaborative knowledge transfer, and a faster pace of iteration and innovation—traces directly back to the delight and joy we bring to developers’ day-to-day lives.

Think back to those moments when you first fell in love with programming. You sat down at a computer—maybe it was an old Apple Macintosh or a TI-83 graphing calculator—and got lost in hours of magical focus: thinking, tinkering, and tweaking your program until it was just right. At some point, you probably reached a flow state, that state of mind where all the context you need is mentally at hand, like it’s paged into your brain’s L1 cache, and you’re free to focus on the most creative and imaginative parts of the job. You were coding at the speed of thought.

We’re building Sourcegraph to bring you back to that feeling every single day. The hard part is getting there. Devs spend 10x the time reading code as they do writing it. And the reading is often much less fun than the writing is—you’re not sure where to start, you’re down yet another rabbithole, you’re managing multiple editor windows and browser tabs, you feel tethered to the familiar parts of the code. Who among us has never looked at a library function and thought, “Thar be dragons!”

Great code search illuminates all corners of the world of code and brings that universe of shared human knowledge to the fingertips that type out the search query. It encompasses code navigation and other contextual information that makes code easier to grok. It makes the entirety of your code—the code you wrote, the code your teammates wrote, all the code in your company, and all the code in open source, in any language, on any code host—immediately accessible. The most developer-forward organizations have been using it for years. We’re bringing it to every developer and every single person.

Building great code search for everyone

How are we doing that? Well, we’ve taken great inspiration from a variety of sources—other code search engines (Livegrep, OpenGrok, Hound, Google Code Search, and Zoekt to name a few) built by amazing developers, the feedback of our early users and customers who shared our conviction in the value of code search, and our own intuition and direct experience as developers with a passion for building, collaborating, and educating. Looking toward the future, here are the areas where we’re planning to invest to push the frontiers of code search and put it in the hands of everyone:

We think that really good code search needs to index the complete world of knowledge the user is hoping to explore, and it needs to be really, really fast. The utility of search drops exponentially with every additional second you have to wait for results.

Our focus on design encompasses both visual elements and the syntax of the query language. We believe it’s important to make both accessible to new users who may be unfamiliar with code search while enabling a high degree of expressivity. 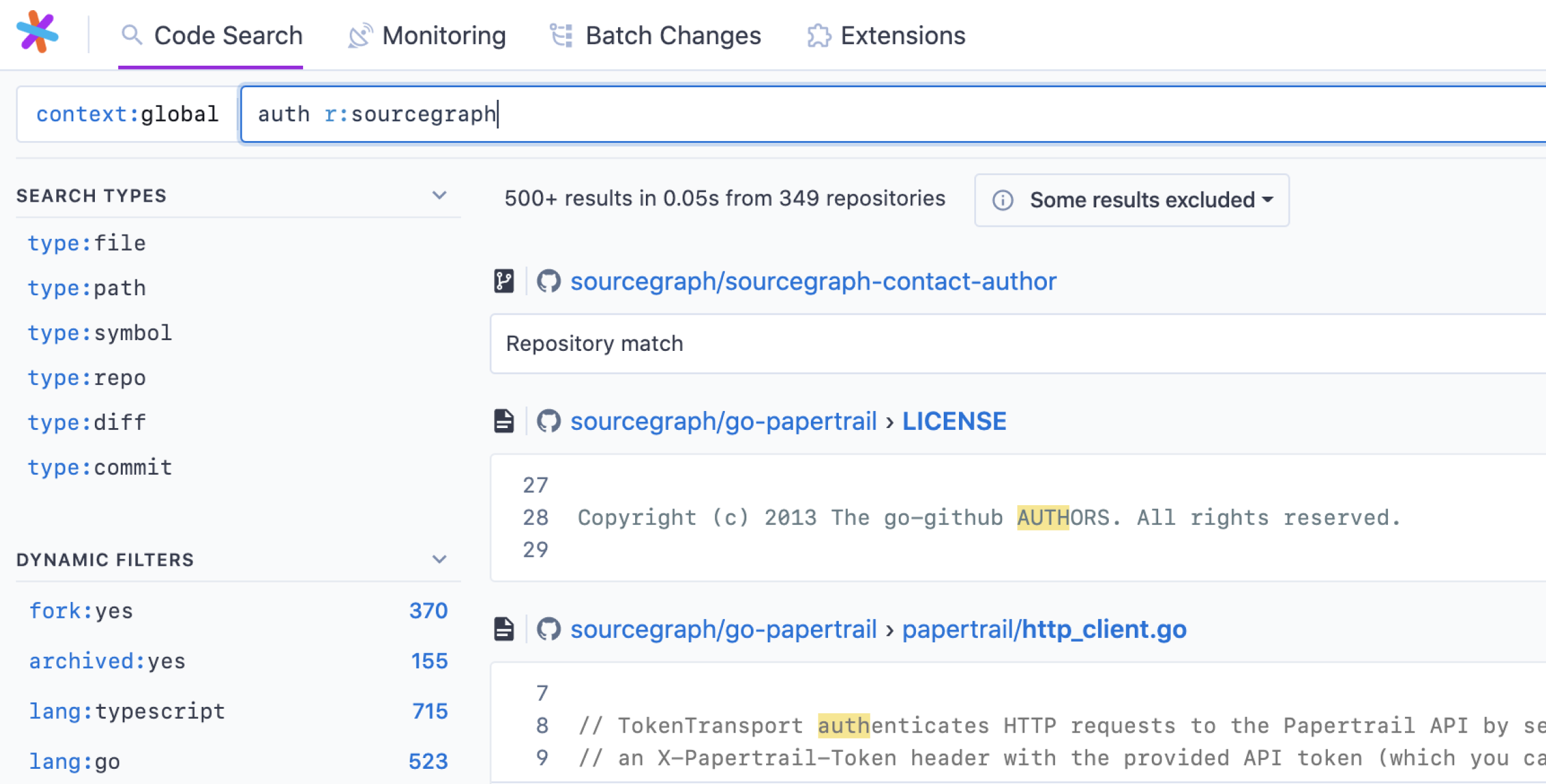 We have a “Ctags++” level of code navigation for every major programming language. We aim to achieve compiler-accurate code navigation in every language soon through the use of language servers and LSIF indexers. We want to make it so you never have to set up a development environment again in order to get hover tooltips, jump-to-definition, or references working.

We want to enable developers to explore their code as a dataset and track useful and actionable metrics like code coverage, the quantity of dead code or TODOs, the progress of big migrations and deprecations, and the prevalence of anti-patterns. We also want to make large-scale changes that may address the issues that underlie these metrics much easier. 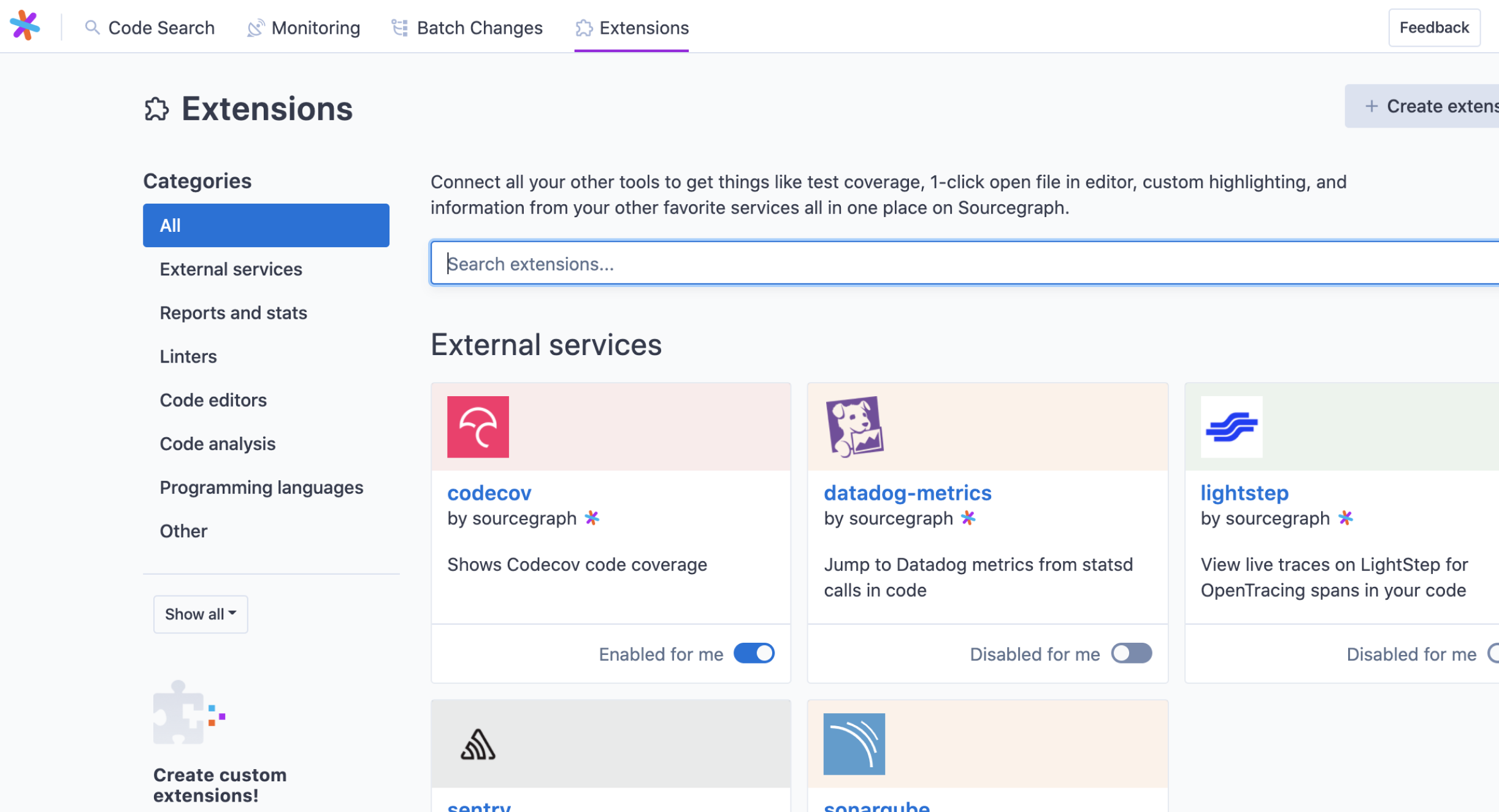 All this is the tip of the iceberg of what we have planned. Our latest fundraise allows us to make faster progress toward shipping these features to developers everywhere and focus on our long-term mission. We believe great code search should be available to every developer in the world. If you’d like to help us build this future as a member of our team, want to give us product feedback, or would like help bringing Sourcegraph into your organization, hit us up!