In late 2017, Slack's largest customers were plagued with relentless performance-related outages. Our monolithic, spaghetti codebase was increasingly difficult to reason about; small, innocuous changes might accidentally cause a cascade of regressions. A few concerned engineers teamed up to build a tool detecting and preventing these changes from reaching production. Known as "Slerf" (for "Sl"ack P"erf"ormance), the simple system runs atop Slack's existing unit testing framework and alerts backend engineers early to any potential regressions their code might introduce. Learn how you can extend your own testing framework and improve both the confidence of your engineers and stability of your product while maintaining a high development velocity!

She'd like to claim she's been programming from a young age, but actually started coding late in her first year of university.

What does she do?

What she and her team actually do:

Let's rewind the clocks to summer 2017

At the time, we were working in an increasingly growing codebase where it was becoming difficult to keep everything in your head.

Ownership was hard to determine.

Building a new feature in summer 2017!

Building a new feature at the time involved just a few simple steps.

It wasn’t incredibly sustainable given that we were also on-boarding new engineers at a rapid pace.

It was a little bit like trying to launch a fast-food restaurant with a ten-page menu out of a tiny apartment kitchen and trying to increase throughput by throwing more chefs at the problem rather than redesigning the kitchen. 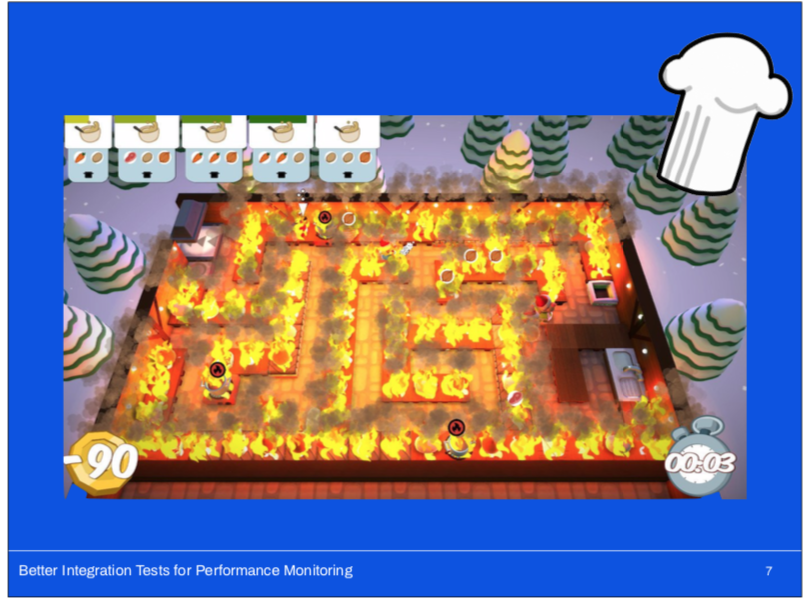 On top of these growing pains, we were also deploying code to production from 0 to 100% of our servers in under a minute.

Anyone want to take a guess as to how many times we deployed during an average San Francisco workday?

We had very few gates and guardrails; we had very little visibility into our a single-line change could impact the performance of our application.

At the time, I was working on a team tasked with improving Slack’s performance on the backend for our largest customers.

Because much of our code was difficult to reason about, it wasn’t uncommon for engineers to cause incidents or sometimes complete outages for these customers with what seemed like a benign change.

It was easy to unknowingly author code which would run out of memory when processing a request on a larger team or introduce O(n) new database queries.

Engineers would test out a change on a development environment, see no performance impact on their tiny test team of ten users and two dozen channels, and ship it!

Our team felt as though we were playing a game of whack-a-mole.

So, in an effort to give ourselves a little bit more time to focus on long-term performance enhancements and step back from constant fire-fighting, we set out to build a tool which would help us identify potential performance regressions before merge.

At the time we were naming a bunch of our tools using some combination of “Slack” and the purpose of the tool.

Our PHP-turned-Hacklang linter is “splinter” for this reason (think TMNT) for “Slack PHP Linter”.

So clearly the only appropriate name for this tool would be: 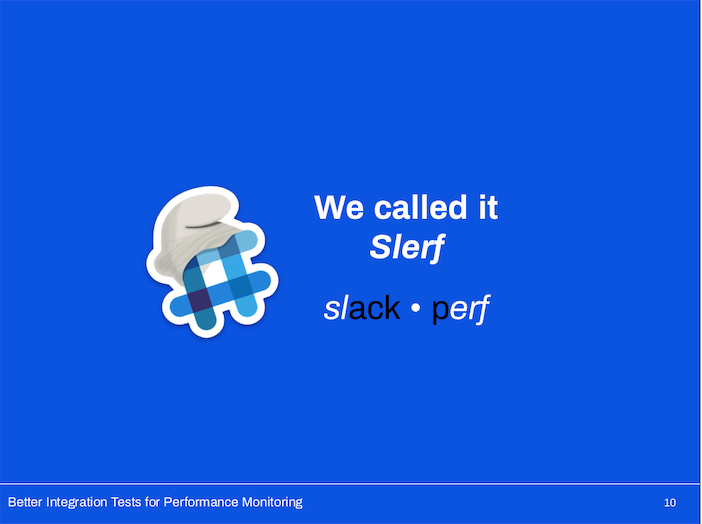 We started with a simple goal: Protect our APIs

These are the lifeblood of the application – if our application is unable to respond to client requests in a timely manner, Slack enters a degraded state and our customers aren’t happy.

We dug through our usage patterns to identify a set of API endpoints (and corresponding arguments) which are hit most often in a regular workday.

It’s not a perfect metric, but it gives us a good sense of the APIs where our users would most likely notice a performance regression.

We somewhat arbitrarily chose to protect the top 15. Sometimes you make arbitrary decisions and it’s ok.

We built a little bot that ran some queries and reported which APIs were most called over the last 24 hours.

It began alerting in October of 2017 and still alerts today: every Monday, at 3pm in our alerts channel. I’ll show a comparison with a more recent alert later for those who are curious to see the difference two years has made.

I can’t reveal exact numbers (thus the blurring) but I can give you a sense of the scale between some of these APIs at the time. 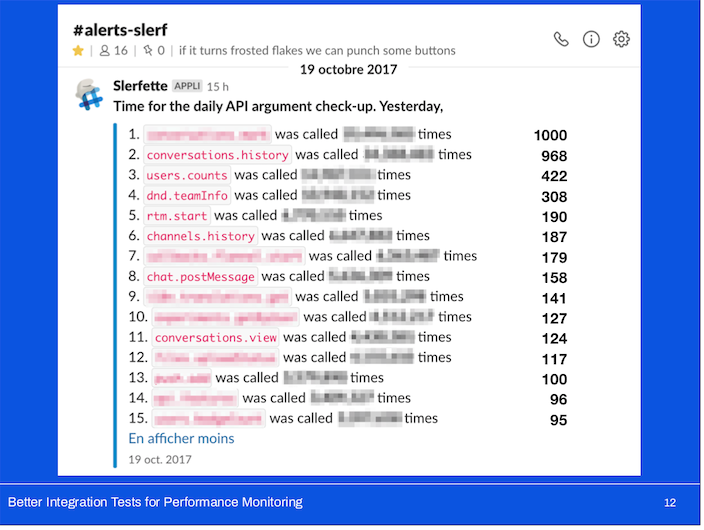 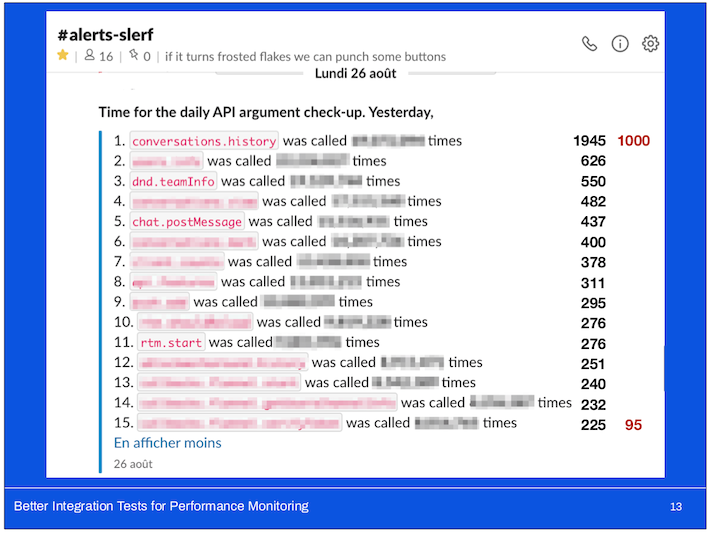 You’ll probably notice that in my Slack screenshots, there’s a bunch of French; I grew up speaking French and before Slack was internationalized, I set it to French to help the team doing the translations. I’ve kept it in French ever since.

Thankfully, we already had some tools available to us. 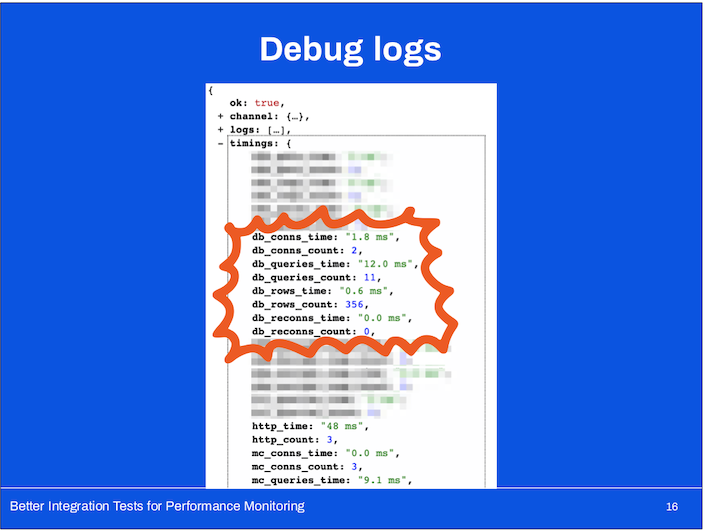 Why number of database and memcache queries?

You may be thinking that this sounds super simplistic or even naïve!

This is what we had in terms of easily accessible information and turns out that our most serious performance problems at the time were nearly always related to DB operations.

Oftentimes we were concerned about hidden linear dependencies which required us to make a large number of roundtrips to our database.

In a busy thread, that’s a bad time.

I want to take a second to acknowledge other types of data we might’ve used to spot regressions:

So given all of this, what did Slerf do?

Report back the results to the author!

We unfortunately didn’t report back particularly informative results – because we only logged query counts, we could only report on query counts.

It was up to the code author to figure out where they might’ve introduced any new dependencies.

We weren’t being particularly clever with the metrics we were tracking but we wanted to Slerf to block merges as a warning to engineers. So we made sure there was a middle ground.

If Slerf observed a regression and blocked your PR, you could acknowledge the failure and merge your change. If you felt confident that either the results were wrong or you fully intended to add a new DB dependency, we weren’t going to get in the way of you getting your work done.

The good, the bad, and the ugly

Let’s do a quick retrospective on our first iteration of Slerf.

Overall, we considered the tool a success ... 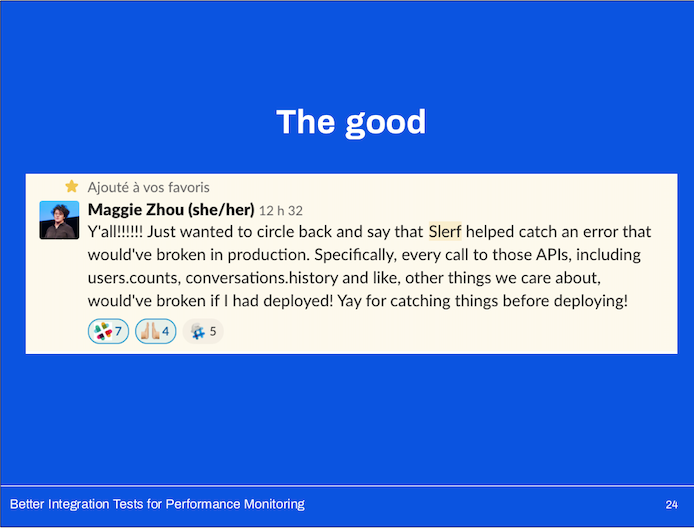 We caught some potential regressions!

Early on, Slerf alerted on changes which would have either considerably slowed a subset of production APIs or, in some cases, almost brought down the entire application. 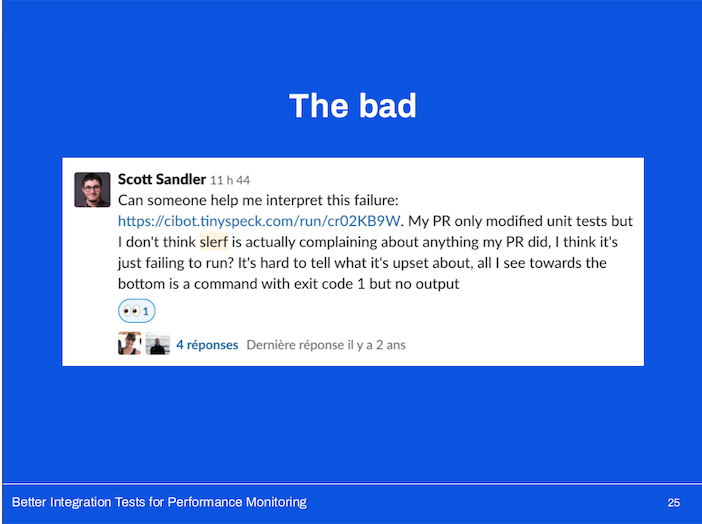 Oftentimes our memcache tier would become entirely unavailable and wasn’t uncommon for the test to take over 15 minutes to run because of the time required to deploy a branch to an environment and get it up and running again. 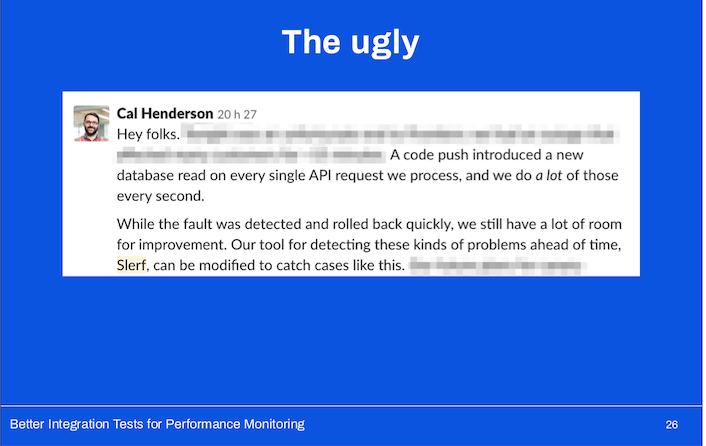 While we could work to stabilize our testing infrastructure and decrease setup time, there were severe limitations to how Slerf worked under the hood.

This became pretty clear about a year after we’d launched Slerf:

The tool issued API requests to a QA environment it treated as a black box.

It had no visibility into what the application was doing beyond the debug output it received.

We were unable to test the performance of our long-running processes (jobs running in our job queue), or web pages backed by Hacklang code. That was a problem.

So we hatched a new plan:

We sat down and took another look at what was available to us, and that’s when we had the “aha!” moment!

Why not benchmark our integration tests?

What makes using them as our source of benchmarks such a powerful alternative?

We introduced a simple function! 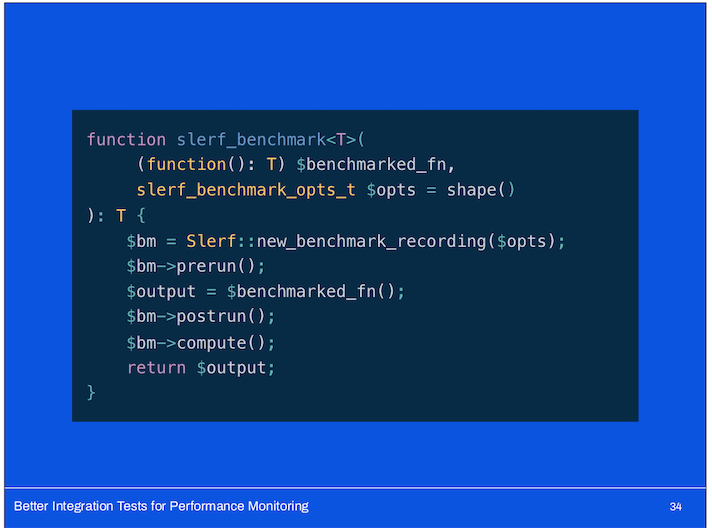 It takes an anonymous function (code to execute) and a set of options.

It creates a new benchmark recording and takes a snapshot of the state of our testing SQLFake and memcache mocks previous to running the code.

It then executes the code it was provided, and takes a snapshot of our mocks immediately afterwards.

It computes the difference between the state observed before and after the benchmarked code was executed and stores the result to an JSON file on the Jenkins CI box.

Finally, it returns the output of the code. 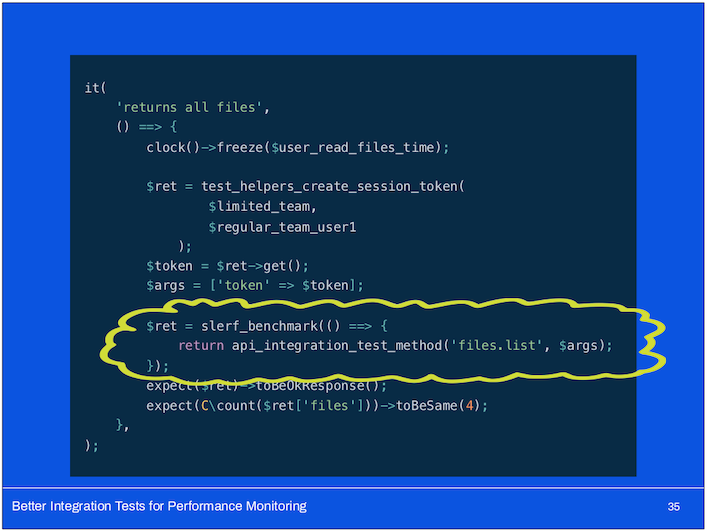 So how does this all work together?

The good, the bad, and the amazing!

Let’s do a quick retrospective on our second version, now will an integration testing suite able to track potential performance regressions! 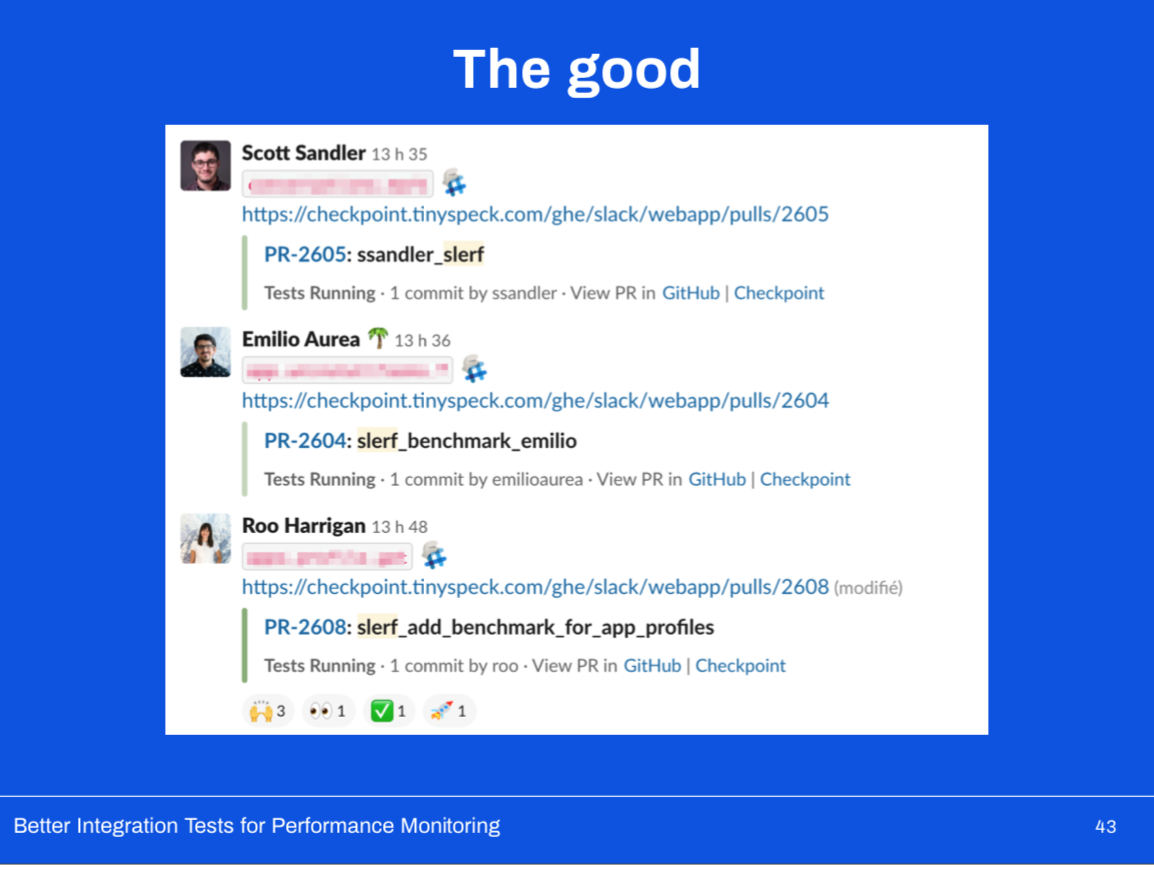 On top of continuing to catch potential regressions before hitting production, it’s now easier than ever to add benchmarks. 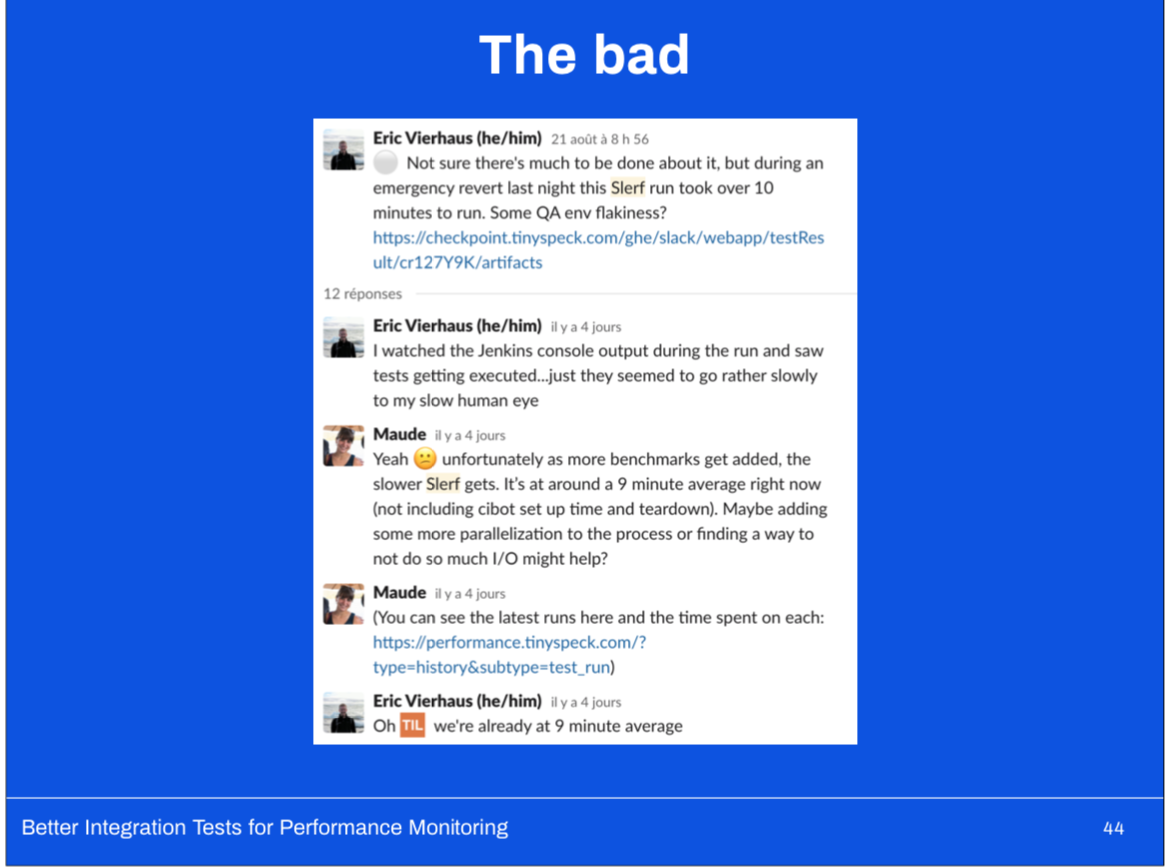 As with any testing suite, as you add more tests, you slow the whole thing down. 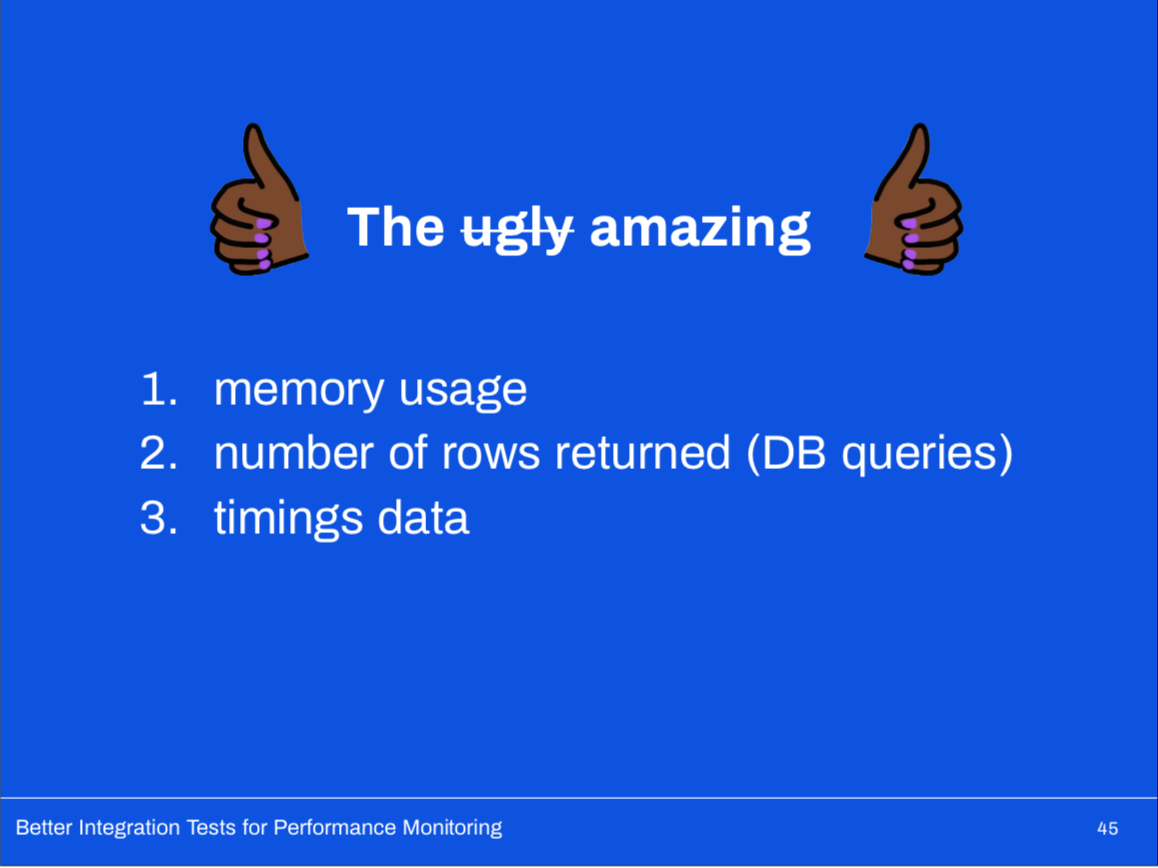 Depending on our mocks makes Slerf incredibly extensible.

We’re looking to introduce metrics around:

If there’s anything you should take away from our experience building Slerf, it’s this:

A: They had a good amount of monitoring, they could look at grafana dashboards that indicated the issues. She had second monitor with graphs of cpu idle time of 5 biggest customers.

A: Had a lot of trouble with user login flow. They had to make sure that if a new query was introduced as part of your branch or master that hit the specific logins table, they would discredit that.