Sourcegraph is the standard developer platform for code search and navigation at many of the largest and most exacting technology companies. With Sourcegraph, every company has access to the same kind of tools that Google and Facebook developers use every day.

👀 In case you missed it...
Other Sourcegraph updates.

📝 Changelog
Every detail that changed in this release.

🎖️ Thank you
Sourcegraph couldn't be what it is without the community.

Symbol search (type:symbol) is a powerful feature for finding specific symbols, such as a function, variable, or package, and not just all text occurrences of your query. More and more users are taking advantage of symbol search results, which was leading to performance issues for some users with large instances. Symbol search is now indexed for default branches, which is a major improvement for both users running symbol searches and admins with large instances that were having performance issues. On large symbol searches, we've seen speed ups by factor of 20x (benchmarks).

Upon upgrading, Sourcegraph will seamlessly & automatically re-index repositories in the background. Once finished, you'll see substantially improved symbol search performance. In the meantime, Sourcegraph will perform as it would normally.

Prior to upgrading, please consult our 3.7.2+ migration guide to ensure you have enough free disk space. 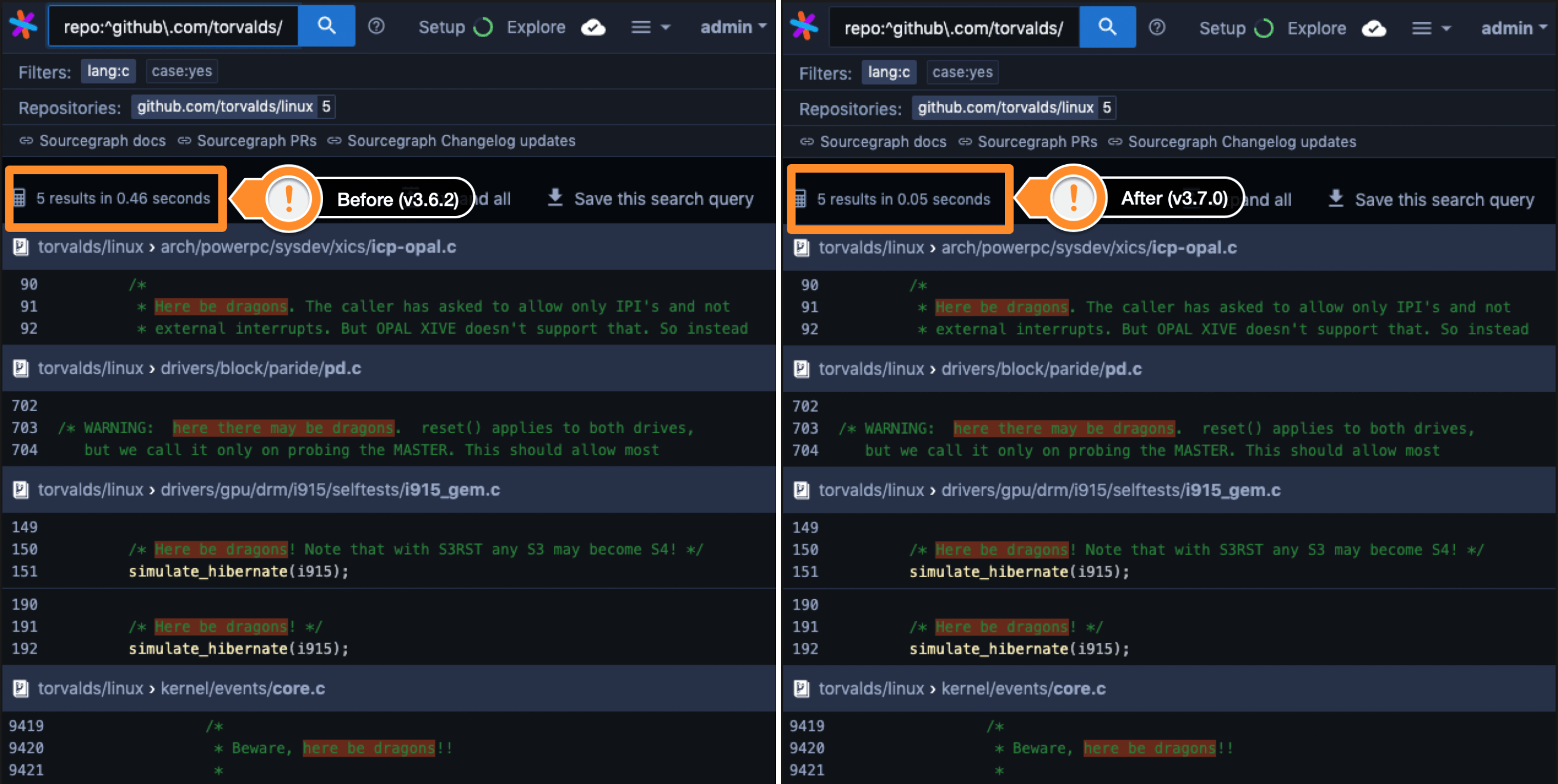 As we continue to make incremental improvements, Sourcegraph search is getting faster, more efficient, and more reliable across the board. In Sourcegraph 3.7:

Out-of-the-box TypeScript code intelligence has been improved with an updated ctags version that includes a built-in TypeScript parser. This means that jump to definition is more accurate for TypeScript files, and the symbols sidebar recognizes more functions and variables with fewer false positives.

We now use Git protocol version 2 with compatible code hosts. This can significantly increase the efficiency and performance of a git fetch by reducing the amount of data transmitted over the wire, especially when Sourcegraph’s copy is only a few commits behind the remote (a common situation).

As an illustrative example, when Git protocol version 2 is used, git fetch on an up-to-date clone of Kubernetes is up to 2x faster and consumes up to 4x less client CPU (averaged across 10 runs on a 2015 MacBook Pro).

You can read this blog post for more technical details and performance measurements.

Multi-line (\n) search on all branches

In Sourcegraph 3.5 we introduced the ability to do a multi-line search in by using \n in queries, however, it was limited to only indexed default (e.g. master) branches. In 3.7 we expand this option to include unindexed branches so you can now perform multi-line searches on any branch.

In case you missed it...

We were proud to host the official liveblog for GopherCon 2019, and all 28 talks are now live.

Some of our favorites were:

Check out the rest of the talks!

Thank you to the many people who contributed to Sourcegraph since the last release!