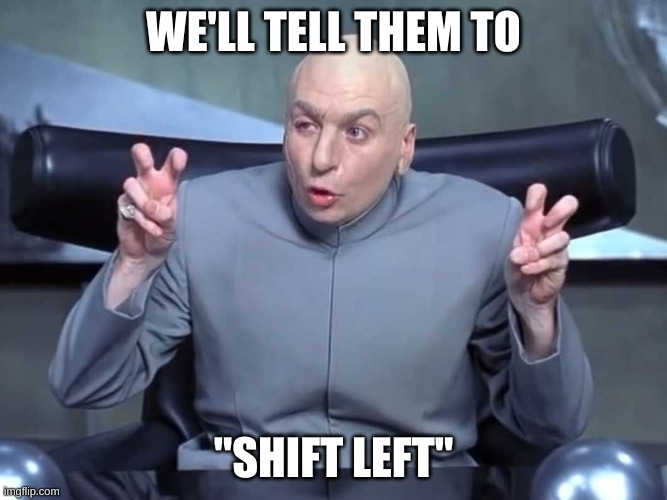 Everyone's telling us to "shift left" these days. This raises some questions. What's being shifted? Who's doing the shifting? How far left should we be shifting it?

To be honest, we're not quite sure ourselves. It can be quite befuddling trying to sift through the reams of "shift left" content, trying to separate the ad copy from the nuggets of truth.

But what we do know is that in most dev orgs, there are concrete things you can do to enable devs to ship faster, without compromising (and indeed boosting) reliability and security. Many of these things have to do with moving key points of validation "earlier" in the development cycle, i.e., "shifting left."

If your organization has identified "shift left" as a strategic priority, read on! We'll cover five specific things you can do to make your engineering org better while satisfying the "shift left" agenda.

"Shift left" is often used in reference to specific testing and security practices, but it also captures a general philosophy summarized as, "Do the most important critical things as early as possible." We assert that Shift Left The Good Parts is ultimately about reaching key points of validation faster, so that you can iterate more rapidly against feedback.

These essential points of validation vary with the project, but they generally fall into one of the following categories:

The importance of these validation areas can be highlighted by their failure modes, which are all too familiar:

To prevent these failure scenarios, you could just introduce new gatekeepers. But the problem is you already have too many gatekeepers, and gatekeepers can only save you from shipping a shoddy system. They can't get you to what you truly desire, which is to ship a good system on schedule.

The real solution is to "shift left" as many of these validation points as possible, which means empowering the developer driving the project to validate these points much earlier than the formal review step.

It seems like an obvious statement, but a surprising number of software projects make it very far along before validating that the deliverable actually delivers value to the end user. Shifting left the user validation means getting to an MVP that can be shared with users as quickly as possible. This lets you solicit high-quality feedback, which is critical because chances are that your initial idea does not fully address the user's need.

Time is of the essence. Discovering existing functions and functionality early on—and avoiding the temptation to reinvent the wheel—can save loads of time.

In order to take full advantage of existing libraries, you need to be able to understand how to use them quickly. This applies to both open source and inner source. Shared libraries must not only be available, they must be accessible and understandable.

Investing in great documentation helps, but this is a hard change to make if your codebase isn't already well-documented. The best way to learn is by example. A single real usage example can be worth a thousand words of documentation.

By stitching together existing components, you can spin up a basic, hacky version of a new feature or product 10x more quickly. Ideally, you don't even have to worry about spinning up a production environment before soliciting user feedback—tools like ngrok (a favorite of hackathons) enable you to quickly share a service running on your local machine to early adopters around the world.

Most code is written in the context of an existing codebase. It is important to understand the existing code well, as it offers both constraints and opportunities:

Context acquisition is one of the most time-consuming parts of the job—unless you're in a completely new codebase, you probably spend more time acquiring context than you do writing new code. It's like that old saying: "If I had an hour to chop down a tree, I'd spend the first 45 minutes sharpening my axe." So it goes with context. With the proper context, you can code at the speed of thought. Without the proper context, you'll find yourself pulled out of flow again and again when you need to go look something up or realize you wasted an hour writing something that already exists.

Acquiring context means understanding the structure and relationships in code. This becomes 10x easier when you have code navigation. Not having jump-to-def and xrefs is like trying to browse the web without hyperlinks.

Targeted pieces of documentation can help guide new devs to quickly acquire the essential aspects of an area of code. You'll ideally want to use a tool that integrates nicely with the source code and doesn't go stale with time.

And don't forget to have conversations with your colleagues! A good code exploration tool should make it easy to discover and get in touch with the person or team who wrote the code. Technical conversations where both parties come to the table well-informed (e.g., with context acquired through self-guided code navigation) to discuss a matter relevant to pushing forward a current priority are rarely wastes of time.

It may seem obvious to state that you should acquire the necessary context before investing a large amount of time writing code, but many projects waste weeks and months of their timeline because engineers did not become aware of some crucial piece of context that would have had major downstream impact if it had been discovered earlier.

Reading tests is a good way to understand the structure of the code. Unit tests provide examples of the canonical invocations of public APIs—they show you how you're supposed to use them. For this reason, reading unit tests is often more helpful than reading the documentation.

It's also helpful to understand how well tested the current code is. Test coverage can be a proxy for general code quality, which is something you want to keep in mind. You may want to add tests beforehand, so you don't have to waste a bunch of time manually testing and debugging uncaught failure modes later.

If the desired functionality is clear and has been validated (see the earlier section about User Value), then writing tests first—before any other code—can help you be disciplined about defining a good API boundary. This is commonly called "Test-Driven Development."

Thorough unit tests are essential to ensuring the correctness and long-term robustness of the software. So if reliability is a key concern (and sometimes it isn't), don't wait until the very end of the cycle, when it's time for formal review, to add tests. If you do this, they'll likely be an afterthought.

Inside many organizations, the security team and the development team butt heads. Security is a major gatekeeper in the development cycle and a slow security review process can slow development velocity to a crawl. Simultaneously, the security team often uses scanning tools that surface a large number of potential vulnerabilities in the dependency tree, which it wants the dev team to address by updating the dependencies. This is more work for the dev team and often the alerts are noisy, so neither side ends up very happy.

"Shifting left" in security can be thought of in two parts.

The first is having a security review process that is clear, transparent, and ideally as automated as possible. This enables the developer to ensure their patch meets the security standards on their own, without having to go through costly, multi-person round-trip review cycles. You can use tools that automate code coverage, linting, and static checks. And you can implement a security testing suite that validates key aspects of your application security model.

The second is about shifting the security stance of the organization from reactive to proactive. Reactive means you wait for the next zero-day to emerge, which forces you to raise a fire-alarm that stops production on all the teams affected. This sort of scenario played out across numerous software organization when the Log4j vulnerability was released in late 2021. We wrote a blog post to help organizations react and remediate quickly with automation.

The benefit of this sort of automation is that it lets you preview the prospective change across all the different locations that have to change. Instead of having to manually open up pull requests to many different parts of the codebase, you can preview them before beginning review processes with many different teams. You also have the benefit of re-applying the patch should a new vulnerability emerge in a later version of the library, as happened with Log4j multiple times.

The better solution, however, is to catch the next Log4j within your organization before it becomes public knowledge. To do that, you must proactively monitor and assess the risk of your open-source dependency tree.

There are many security scanners that do this, but some can be quite noisy. We've heard good things about Snyk and Dependabot, but both of these mainly check your code against the same public database of security vulnerabilities.

Another approach that is complementary to security scanners is to run recurring searches for anti-patterns indicative of vulnerable code blocks or dependencies. These are patterns you define rather than the same common set of CVEs used by security scanners:

One advantage of the search-based approach is you can tailor these more to specific codebases and anti-patterns. Rather than rely on the same set of publicly reported vulnerabilities, you can specify your own set of regular expressions and Comby patterns, and these can even be suggested opportunistically by your dev team.

We've talked about "shifting left" many of the previous validation points from the review stage to a stage earlier in the dev process. But it's important to realize that code review itself is left of the even more final stages of deployment and production monitoring.

It's important that code reviews are thorough, but often the tools don't scale well to larger changesets. As the old adage goes, "make a 10-line change, you'll get 10 comments, but make a 1,000-line change and you'll get a LGTM rubber stamp."

Having precise code navigation capabilities in code review will help reviewers quickly spin up on the structure and content of the changeset and conduct a review that is both thorough and timely.

Another trick is to break up a large changeset into smaller changesets that don't change the behavior of the system until the very last one (e.g., using feature flags). These smaller changes can be more easily reviewed and validated.

Yet another trick is to request review early, when the code is still rough, but the broad strokes are there. If you're doing TDD for a well-defined problem, this might be pushing up the core unit tests and asking to validate the public interface being tested. If you're prototyping, this might involve pushing up a very hacky implementation and asking for feedback on just the "happy-path" (i.e., not yet handling edge cases) user interaction.

How tools can enable shifting left

Ultimately, "shift left" is a philosophy that guides a set of specific cultural and process changes in the software development lifecycle. Both the general philosophy and the specific changes can be much assisted with the use of tools that enable the developer to take full charge of shipping a new feature or bug fix.

To learn more about dev tools that assist with shifting left and accelerating the dev cycle, check out the following posts:

Or you can learn more about Sourcegraph, a dev tool that provides an interface optimized for searching, exploring, and automating code–and happens to map well to many "shift left" themes.