We are excited to announce the release of scip-python, a new SCIP indexer for Python built on top of the excellent Pyright type checker.

What does precise Python mean?

This represents a significant advance in Python navigation for Sourcegraph. Previously, we only supported search-based navigation for Python, which is convenient because it works out of the box and returns correct results for many cases, BUT is limited by:

Precise Python addresses all of those, giving you equivalent code navigation quality to what you get with the Python language server in VS Code or PyCharm (and of course Neovim 😉).

Some of the key features of scip-python include:

pyright supports a very impressive list of features. scip-python was implemented with very few changes (primarily just exposing some internal functions) to the pyright library, which allows scip-python to take full advantage of the type checking and semantic analysis available in the pyright library -- including new Python features as they are supported.

Assuming that you have also indexed either the PyYAML repo or the Python package repo for PyYAML 6.0, then when clicking on the identifier dump in this situation:

Sourcegraph will take you to the definition in the corresponding PyYAML repository.

There are two primary supported cases right now for “Find Implementations” via scip-python in Sourcegraph.

The first case is to examine when and where some “BaseClass” is used as a parent class for another class. Instead of looking for references (which can show instantiation, isinstance checks and more) the user may view the “Implementations” in Sourcegraph. This will only show child class definitions in Sourcegraph.

For a concrete example, see the rich package, where we’re viewing the MarkdownElement.

The references of MarkdownElement are shown below: 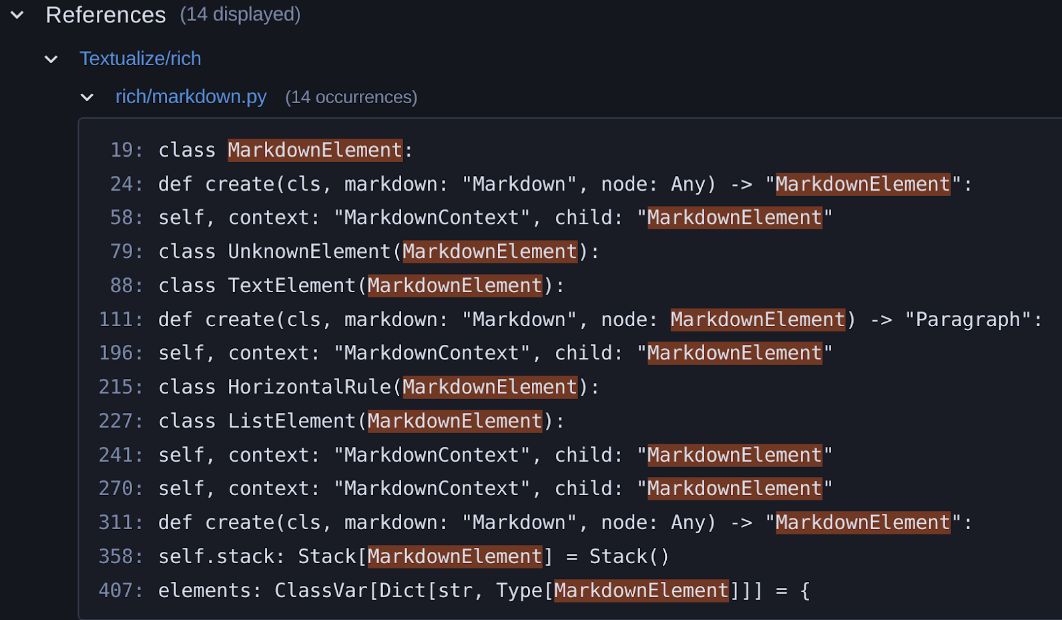 However, if you were looking to find out what classes inherit from this element, we can use the Implementations pane to view that information:

Use the scip-python index command to index a Python codebase.

Projects ready to explore on Sourcegraph.com

We are currently indexing the following projects with scip-python:

Feel free to navigate around in the code on Sourcegraph and leave any issues that you find on our repo.

The indexing performance is varied across codebases, particularly depending on the amount of dependencies and their usage across the project (scip-python will attempt to gain any possible hover documentation and references to these dependencies while indexing). Below is a snapshot of several different repos and their corresponding indexing time (including environment and dependency analysis).

Scip-python is available publicly today. If you’re a Sourcegraph user, you can implement scip-python to enable precise code navigation for your Python repositories.

If you’re not a Sourcegraph user but are interested in trying it out for navigating Python code (or a number of other languages), you can install it locally for free, or reach out to our team for a demo.