Go, being a relatively recent statically typed, compiled language, is known to produce efficient programs. But writing a program in Go is not sufficient for good performance.

Dave was doing a life demo of showing 3 different types of profiling:

Dave started with looking through the following example of code which counts the number of words in the text file provided.

The algorithm is doing the following: Check for an EOF and a space - so we can count for words and also check for letters.

Let's build and run this program:

We have some text:

We have to make our program to run faster.

First thing we need to do is to profile this program. 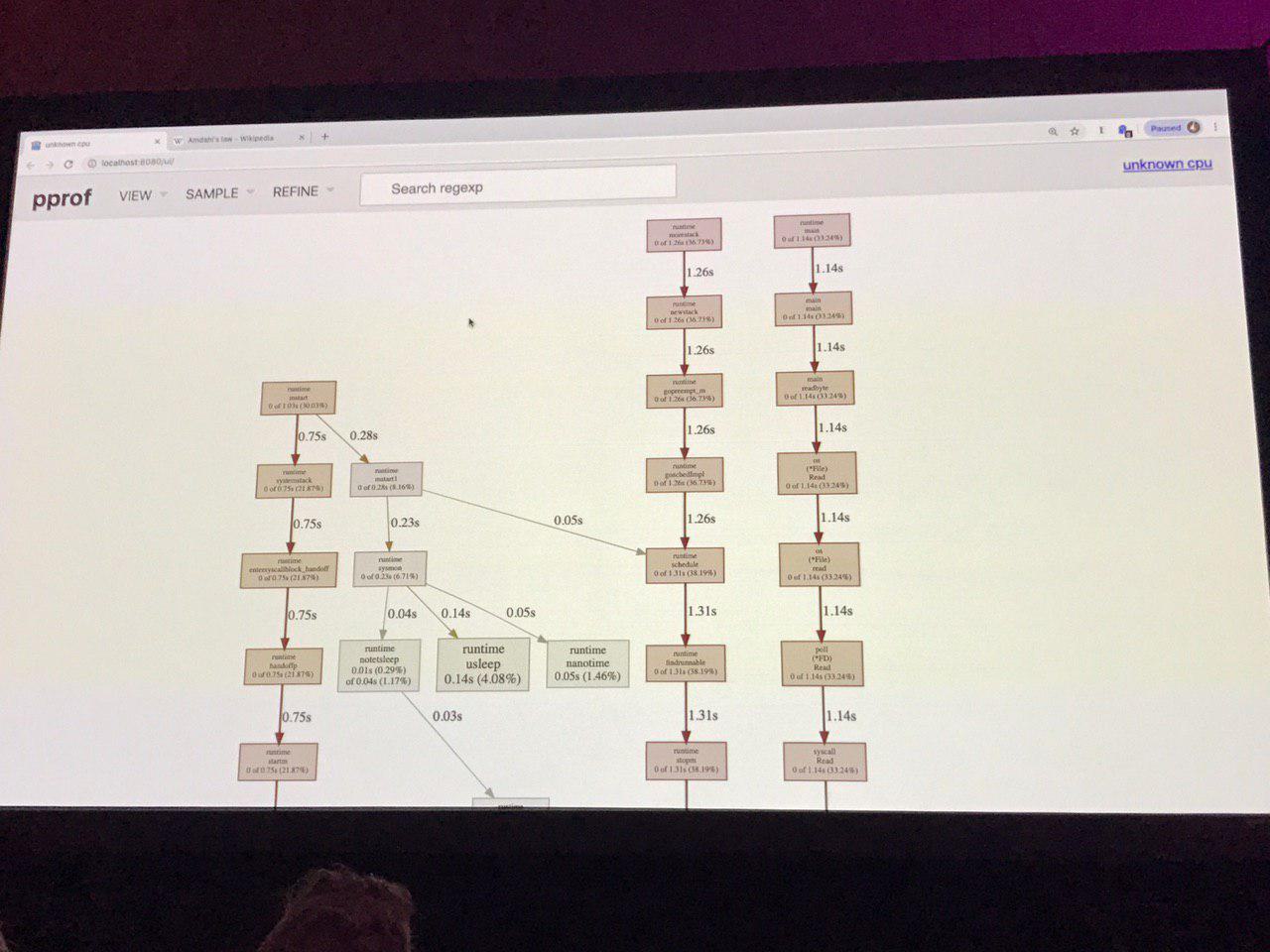 pprof - with pprof the program runs a bit slower, but the benefit is that we have now a profile

we see here a callstack. We sample callstack of active goroutines and check the goroutines that do the most of work.

Here is what is actually our program:

The biggest contributor: syscall.syscall. Is it too slow? It is using all the time in our program, why? Too many syscalls. Its not that syscall is slow, but all the reading operations are unbuffered.

The times are very small now.

The CPU profiling does not show any useful anymore - its just a background noise.

We can see every allocation happen inn this program.

reader interface - we don't know what should be passed here in readbyte - all the memory allocations are being ported.

Let reuse the buffer instead allocating it every time on a stack.

The allocations are tinny now!

We reduced the allocations of this program. go tool pprof -http:8080 mem.pprof

We are only twice as slow as wc

An example that produces a Mandelbrot image

An algorithm runs 1.6s - to generate 1Mb image. Lets see if we can improve it.

main.paint - 1.10 seconds main.fillPixel - using all the CPU time here. But its hard to improve the algorithm.

Lets use the trace tool to find out.

That is a JavaScript debugger in Chrome. What we can see in this graph: Memory allocations are involved here. We can get the stack trace when we click. Problems:

We see that the main.fillPixel function was on the CPU the most when pprof captured the stack.

We don't have many goroutines running simultaneously.

We can see from the trace that the program is only using one CPU.

Using more than one CPU

We saw from the previous trace that the program is running sequentially and not taking advantage of the other CPU's on this machine.

Mandelbrot generation is known as embarrassingly_parallel. Each pixel is independent of any other, they could all be computed in parallel. So, let’s try that.

Now the algorithm runs on a multiple chunks but we have gasps.

Using one goroutine per pixel was too fine grained. There wasn't’t enough work to justify the cost of the goroutine.

Instead, let’s try processing one row per goroutine.

This looks like a good improvement, we almost halved the runtime of the program. Let’s look at the trace. 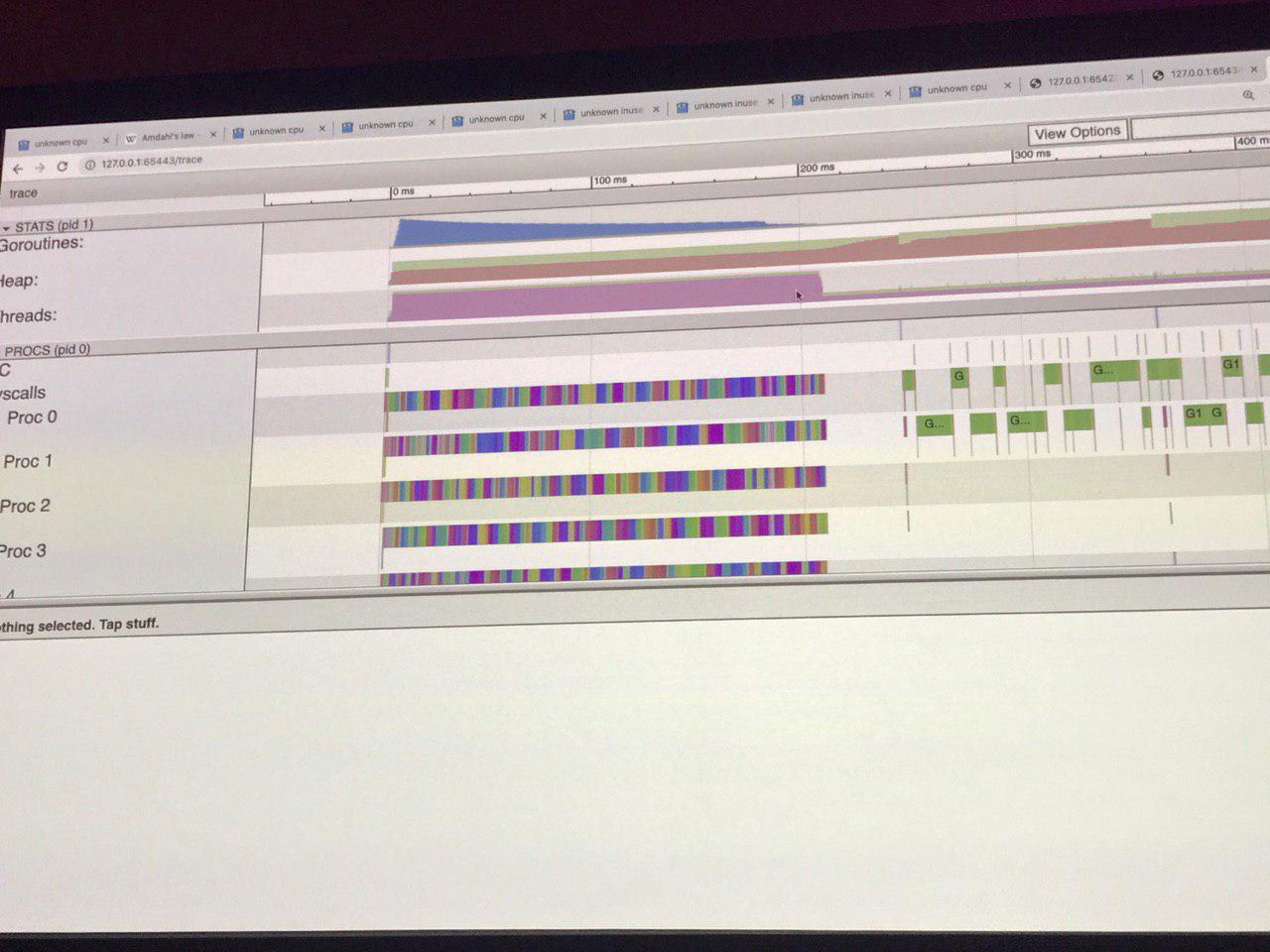 In the main goroutine we queue the work using buffers channel

Looks similar with the only difference: Fixed number of goroutines now.

Did it much difference in practice?

Boost the performance of the code - nearly 4 times! 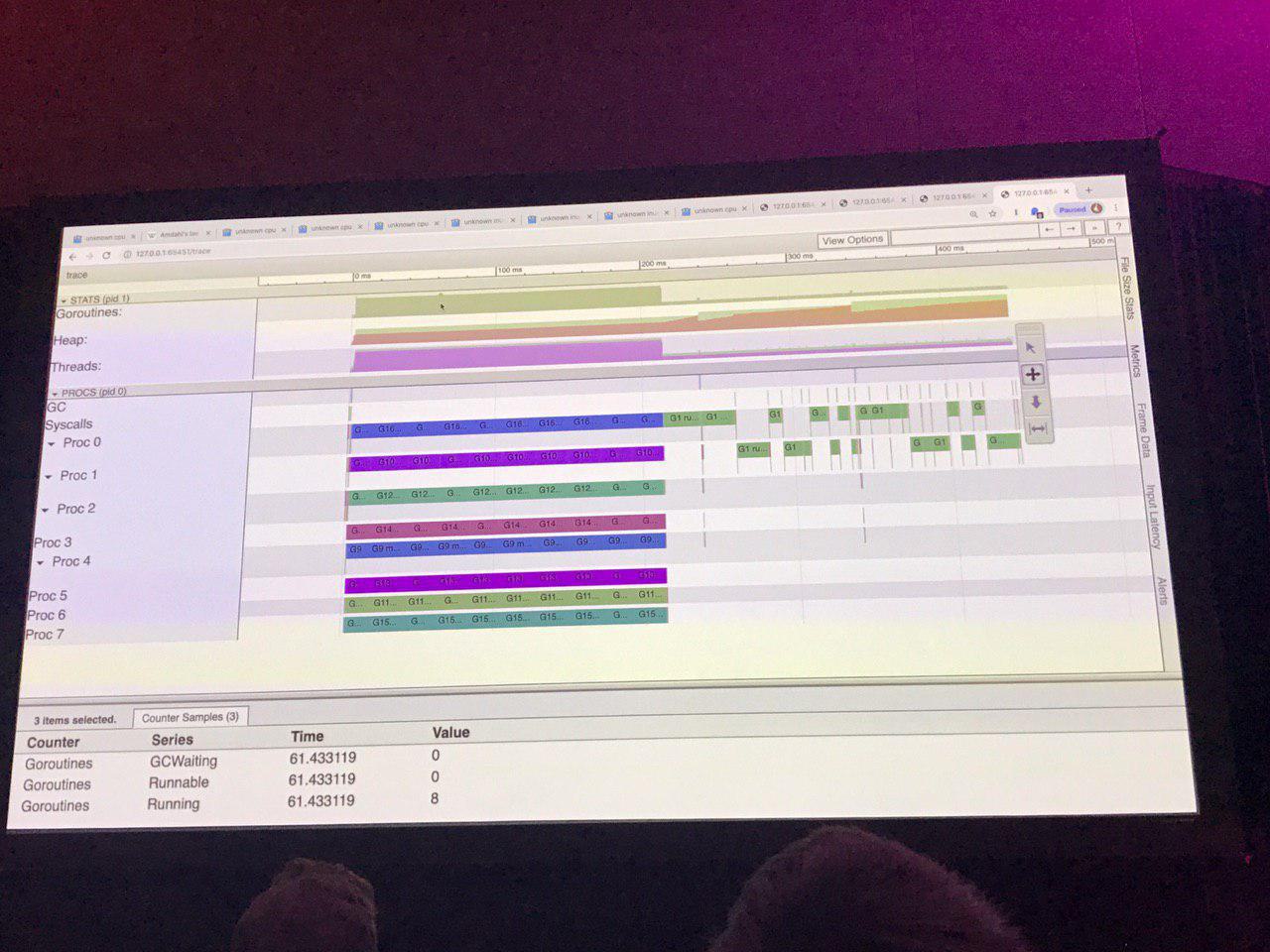 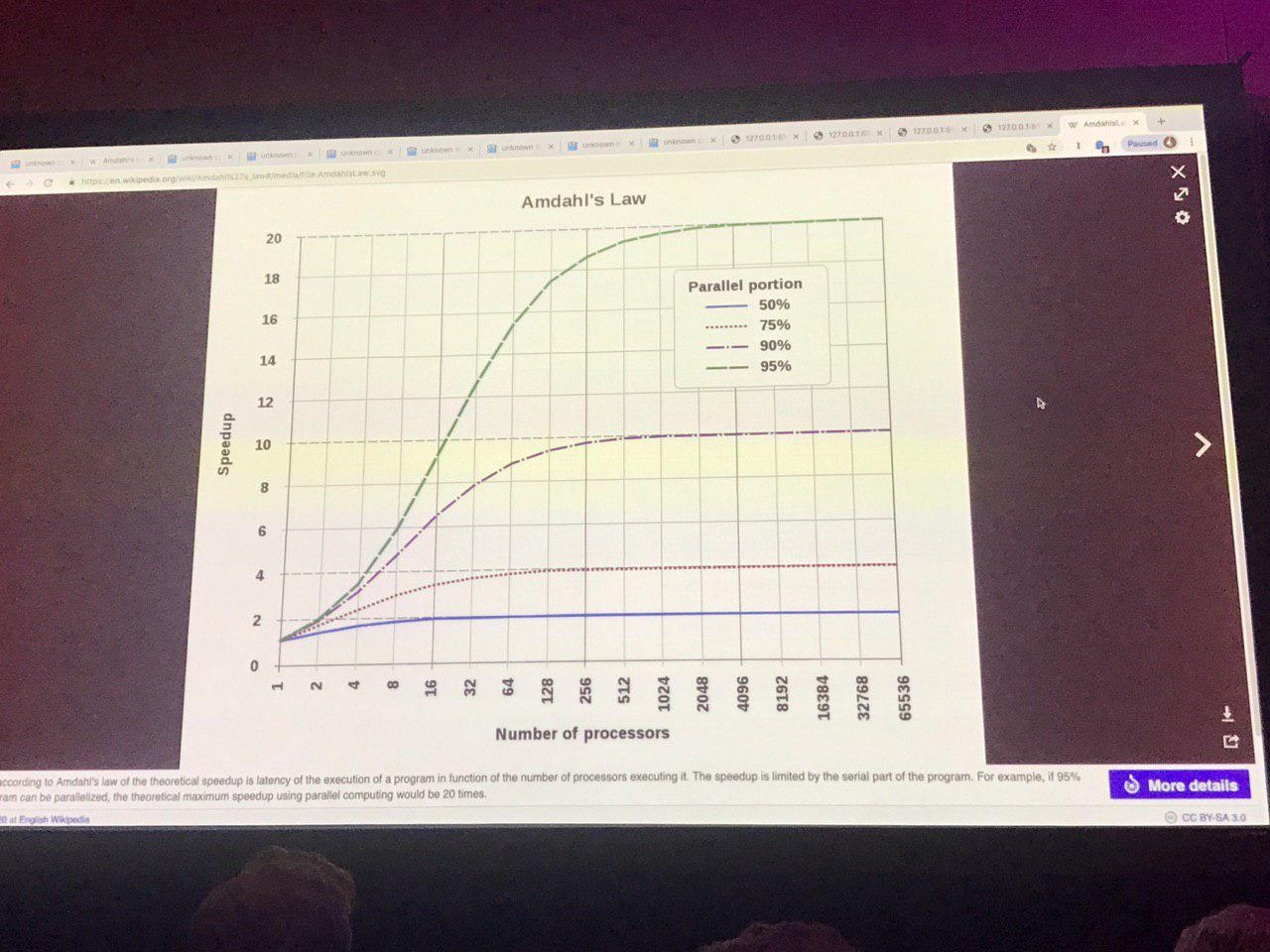 The speed is limited by serial part of an application that can not be paralleled.

Think about your own programs! How much of the work can be done in parallel?

The key is to make effectively all of the work in parallel.