Using a service-oriented architecture instead of a monolithic architecture adds flexibility but also increases complexity. How will we keep track of which parts of our system depend on each other? To help solve this problem, I've been working on a project to analyze Go code (using Go!) to detect inter-process dependencies in our system. In this talk, I'll give a brief introduction to the static analysis libraries I used and share a few tips about how to use them effectively. I'll discuss obstacles I encountered along the way and my attempts to overcome them.

Mike works at Bloomberg on the Deployment Solutions team. Slides for this talk are online here.

Outline of this talk:

When Mike joined the Deployment Solutions team 2 years ago, they made the decision to start using Go and also move to a microservices architecture. Their microservice only had a single endpoint, so perhaps it was more a "nanoservice".

He embarked a project to accomplish the following:

Here was his initial plan:

What are some example "interesting" calls?

Who (which services) are we calling?

So which call do we "mark" (as indicating an external process dependency)?

You can have a direct call (super straightforward):

You can have a specific helper (i.e., 1 level removed):

You can also have generic helpers: 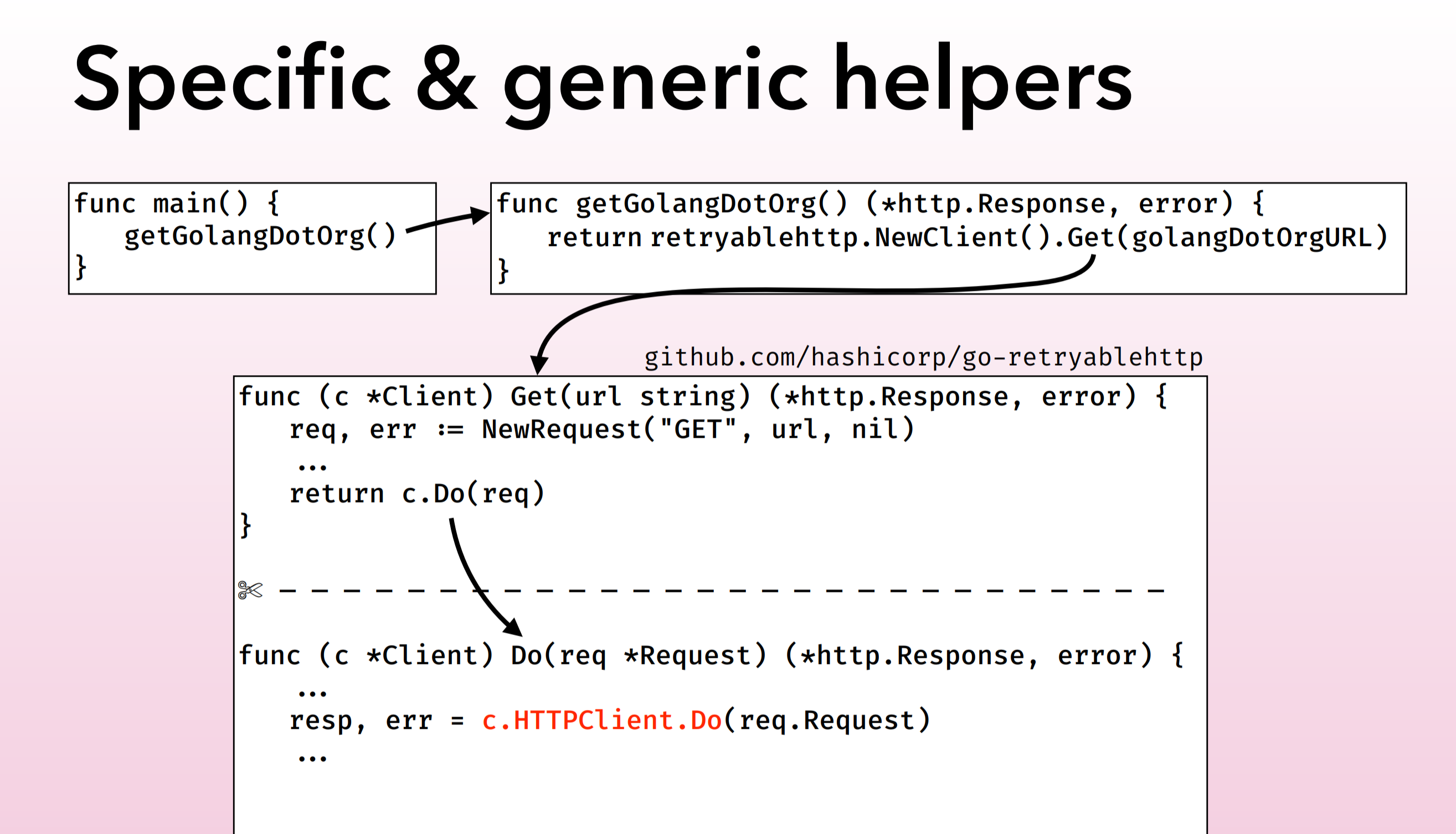 So you are looking at the call chain:

The question is where in the call chain do you place the marker.

You can look at where the last place where the service URL appears. And you mark that with a comment: 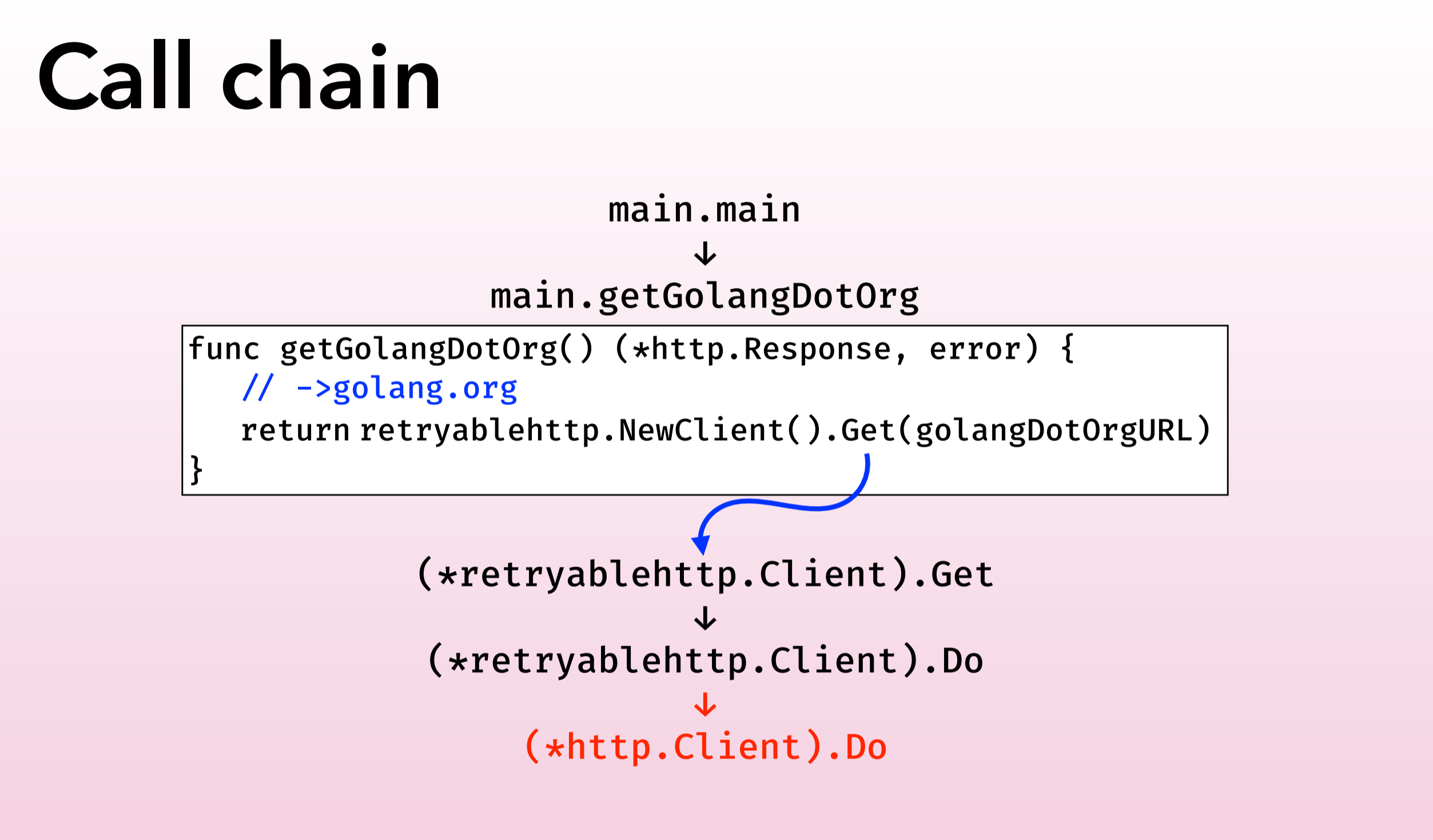 To take a more complex example, you want to look at the call graph and determine where to place the markers. If you mark func A in the example below, you've covered all the ingoing paths to func A, and you can disregard all outgoing paths, as well. Then you need to mark other functions that haven't yet been "covered": 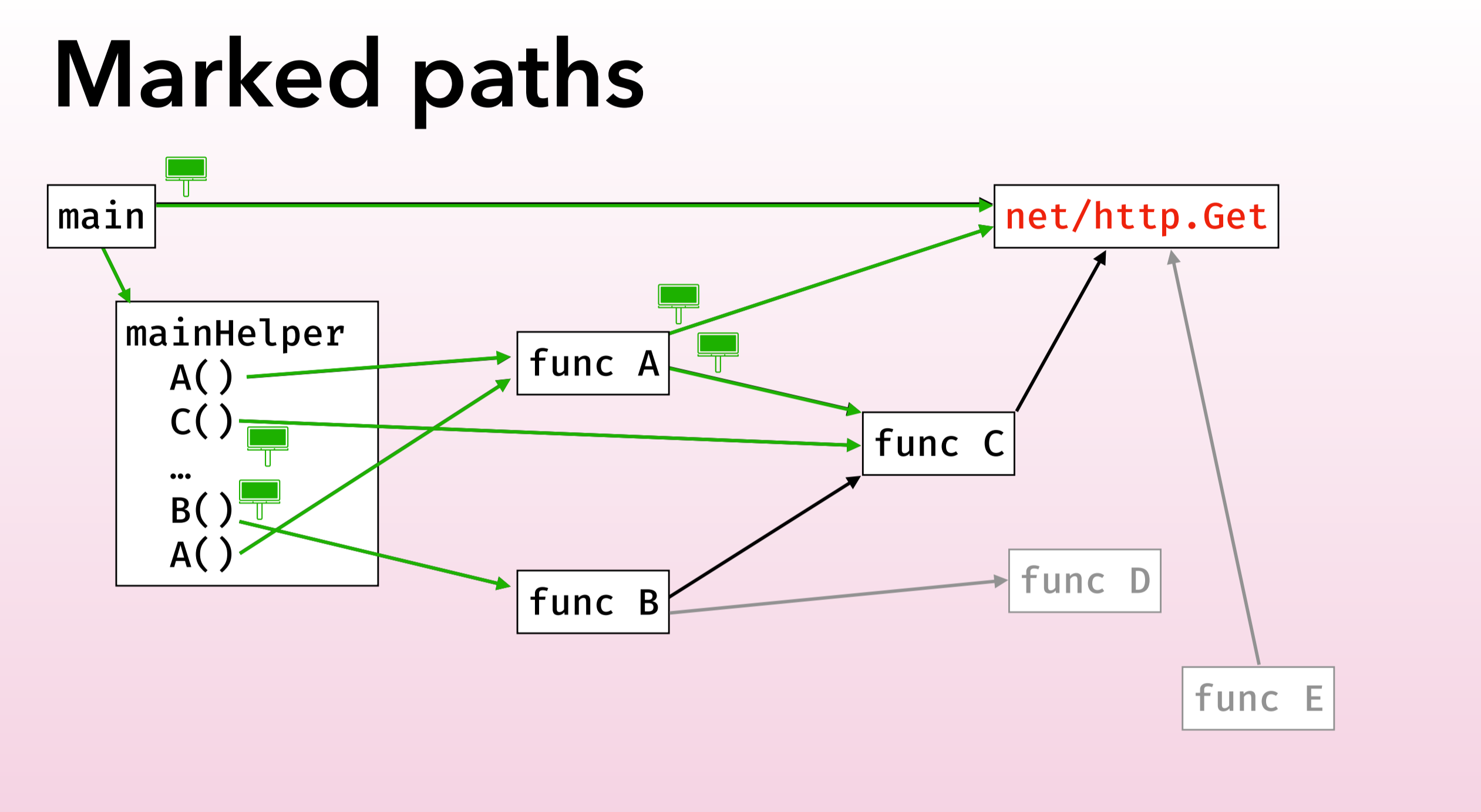 Source diving... He did a quick search of GoDoc for "call graph" and found the following packages:

Here are the key functions in each package, all of which take a *ssa.Program pointer: 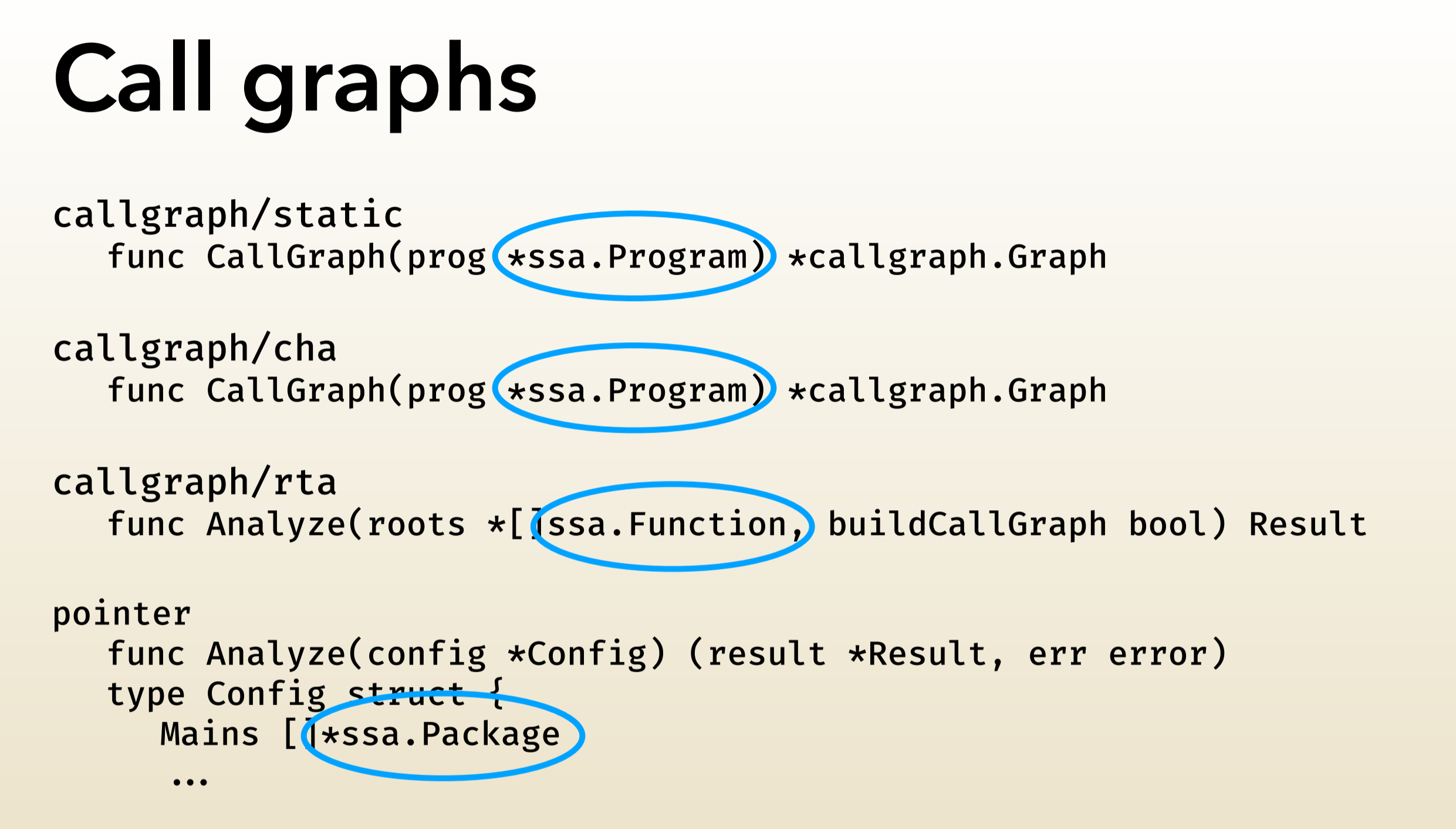 A lot of packages in golang.org/x/tools that are prefixed with analysis/: 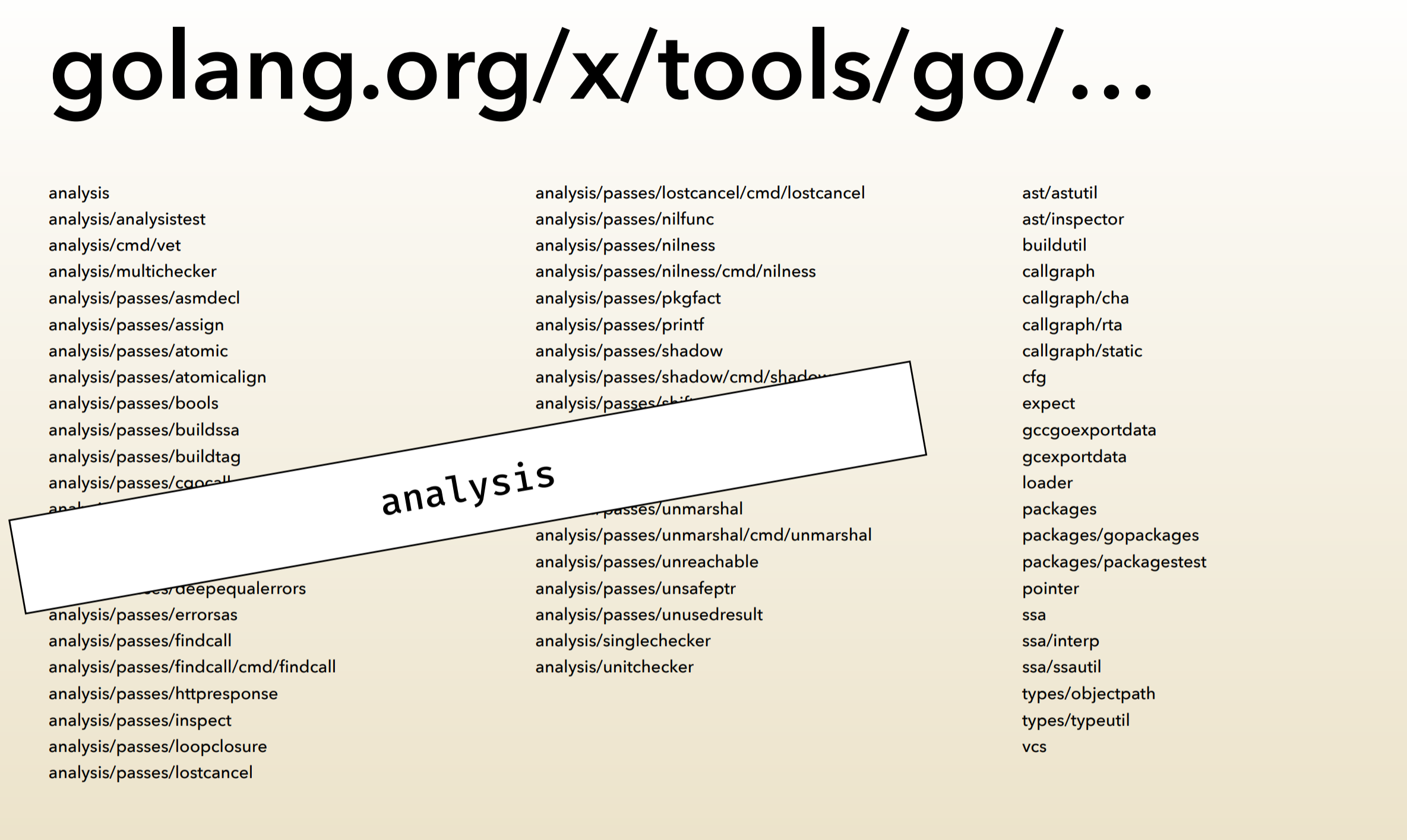 "The analysis package defines the interface between a modular static analysis and an analysis driver program."

A "Pass" is running an Analyzer on a single package. There were a few such reusable passes:

The Plan: For each package Pass,

This section is a quick primer on static analysis packages in the Go compiler and standard library.

Here's the rough control flow in the Go compiler: 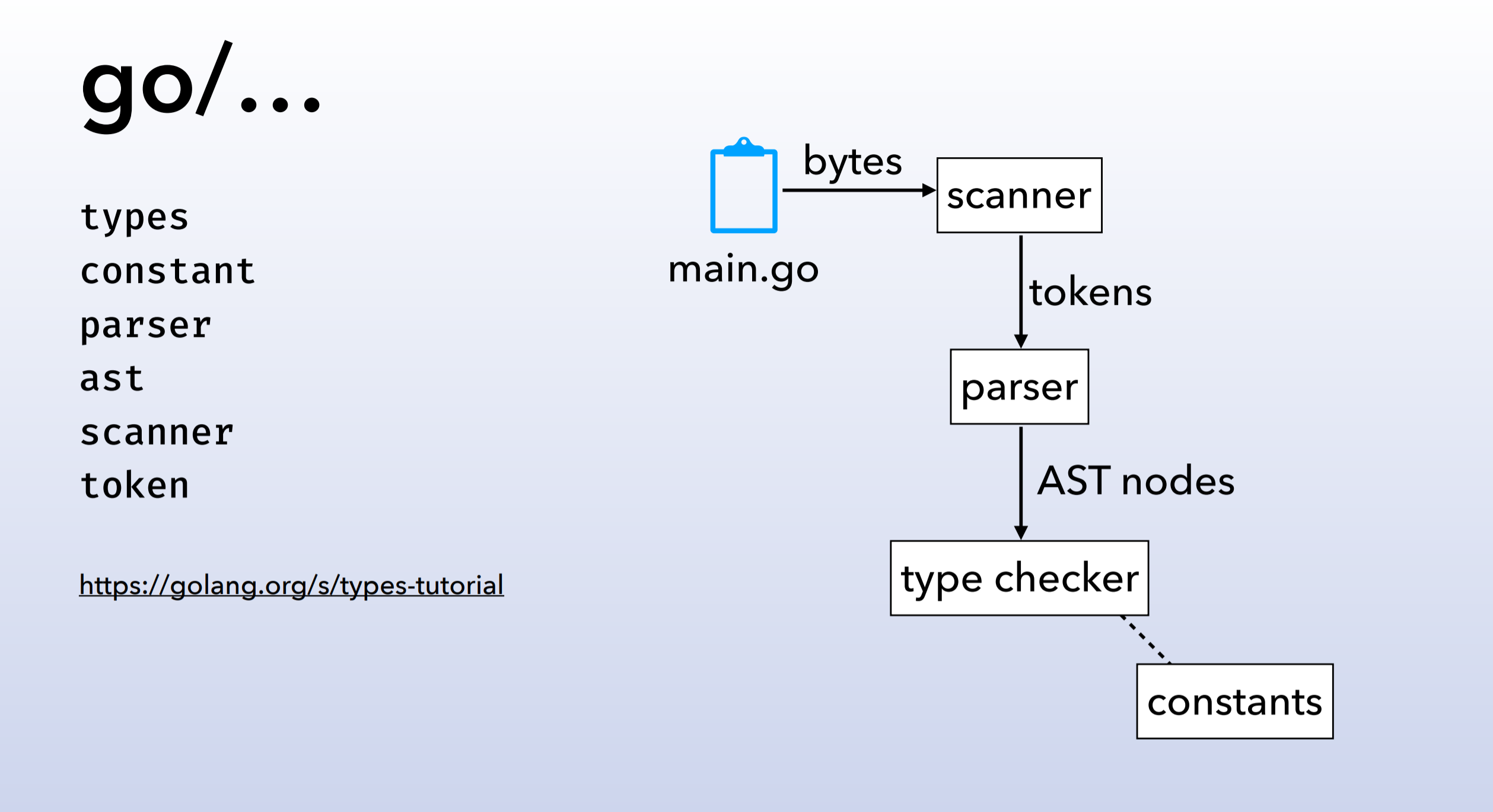 Here's the data structure that represents locations in code: 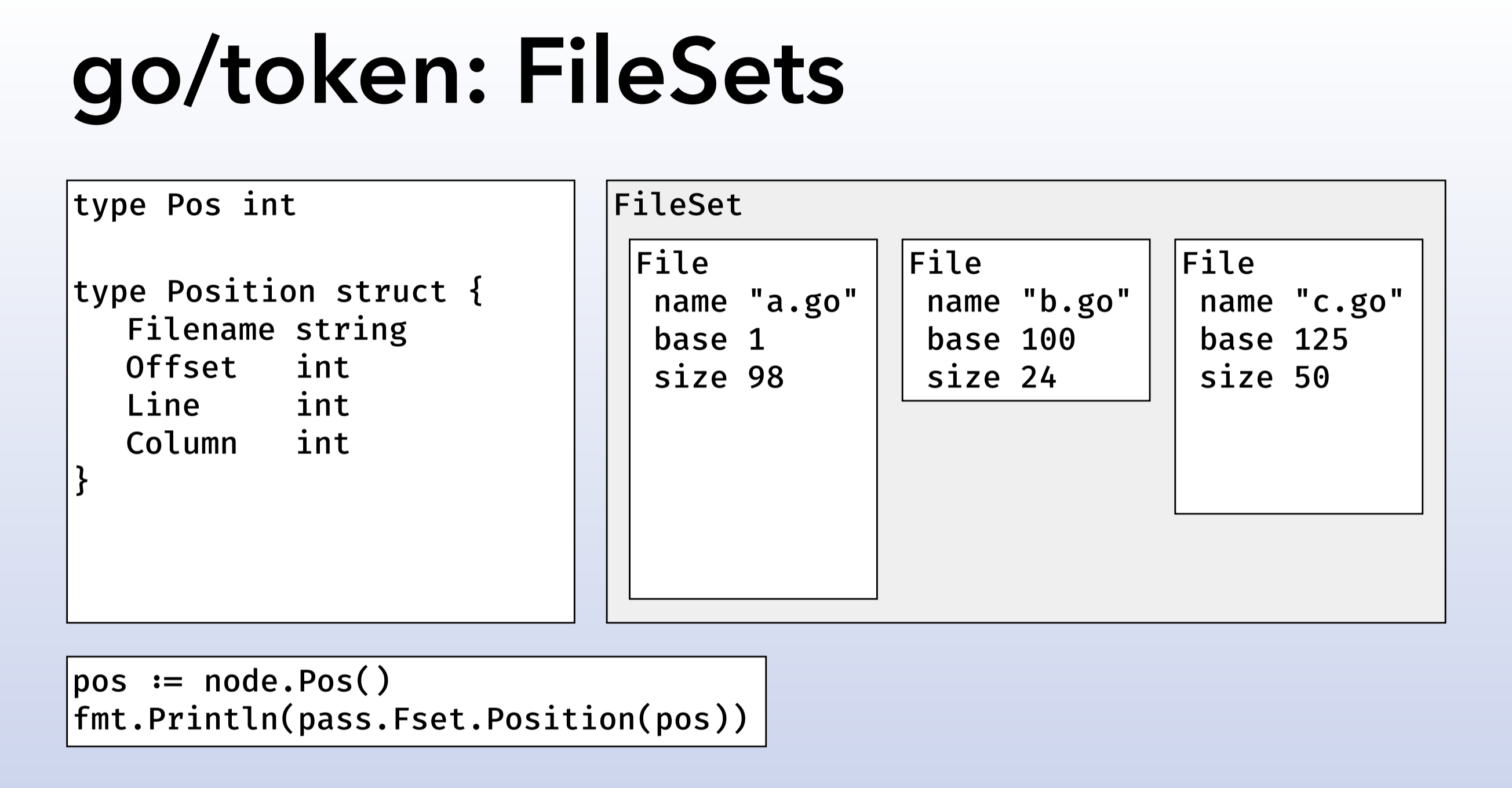 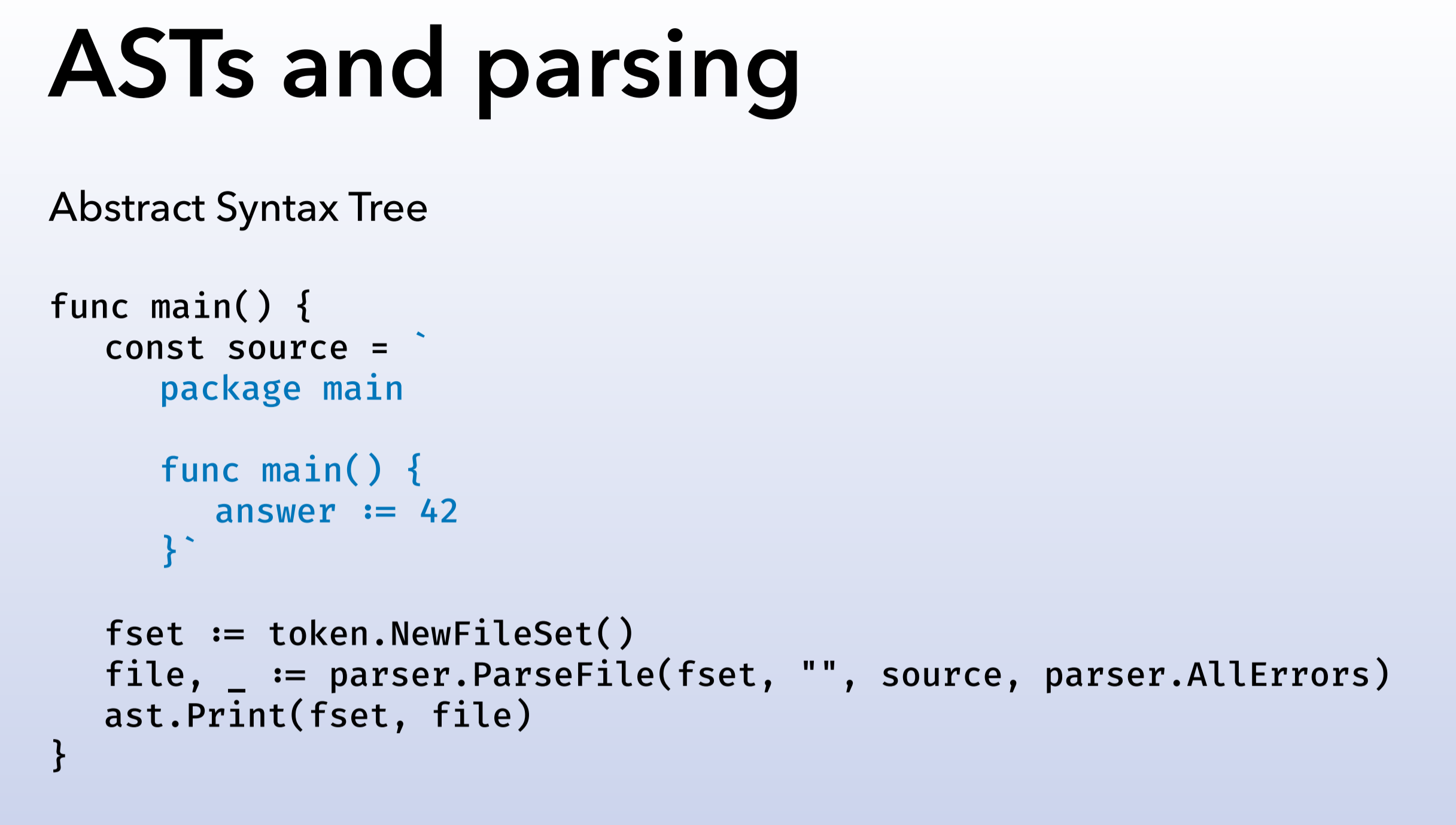 Here's an example AST for a simple code snippet: 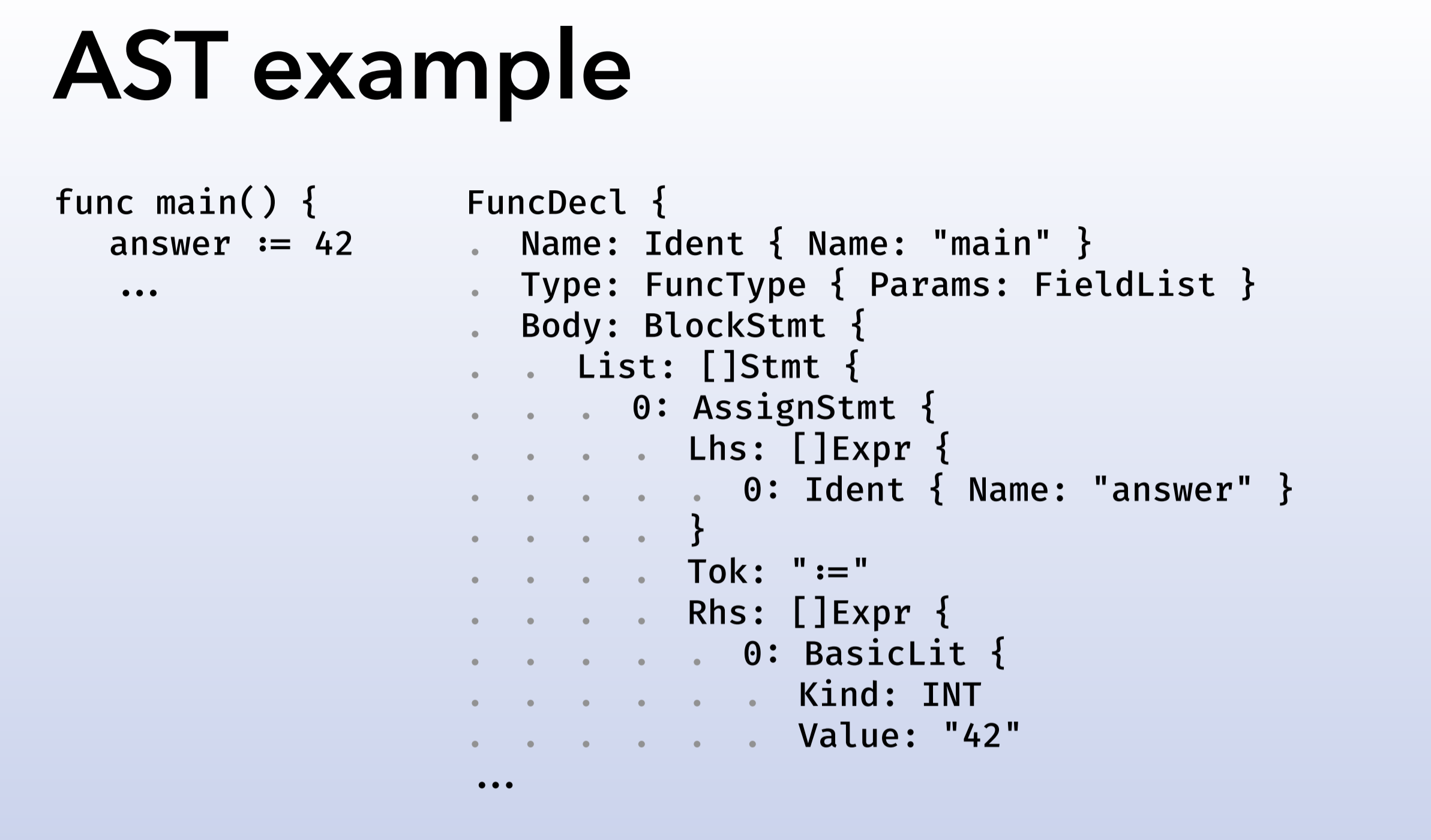 Here are the key structures in the go/ast package: 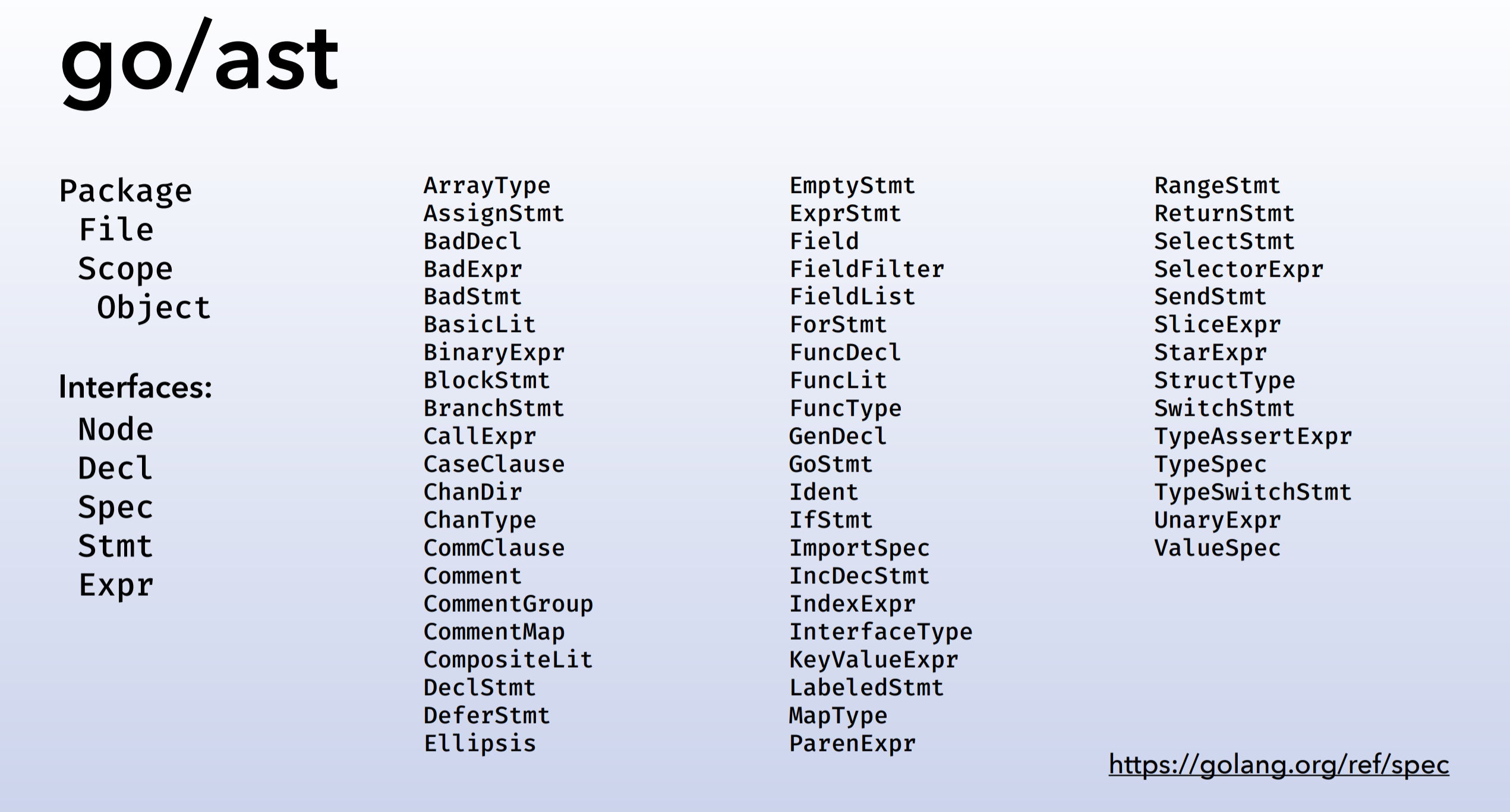 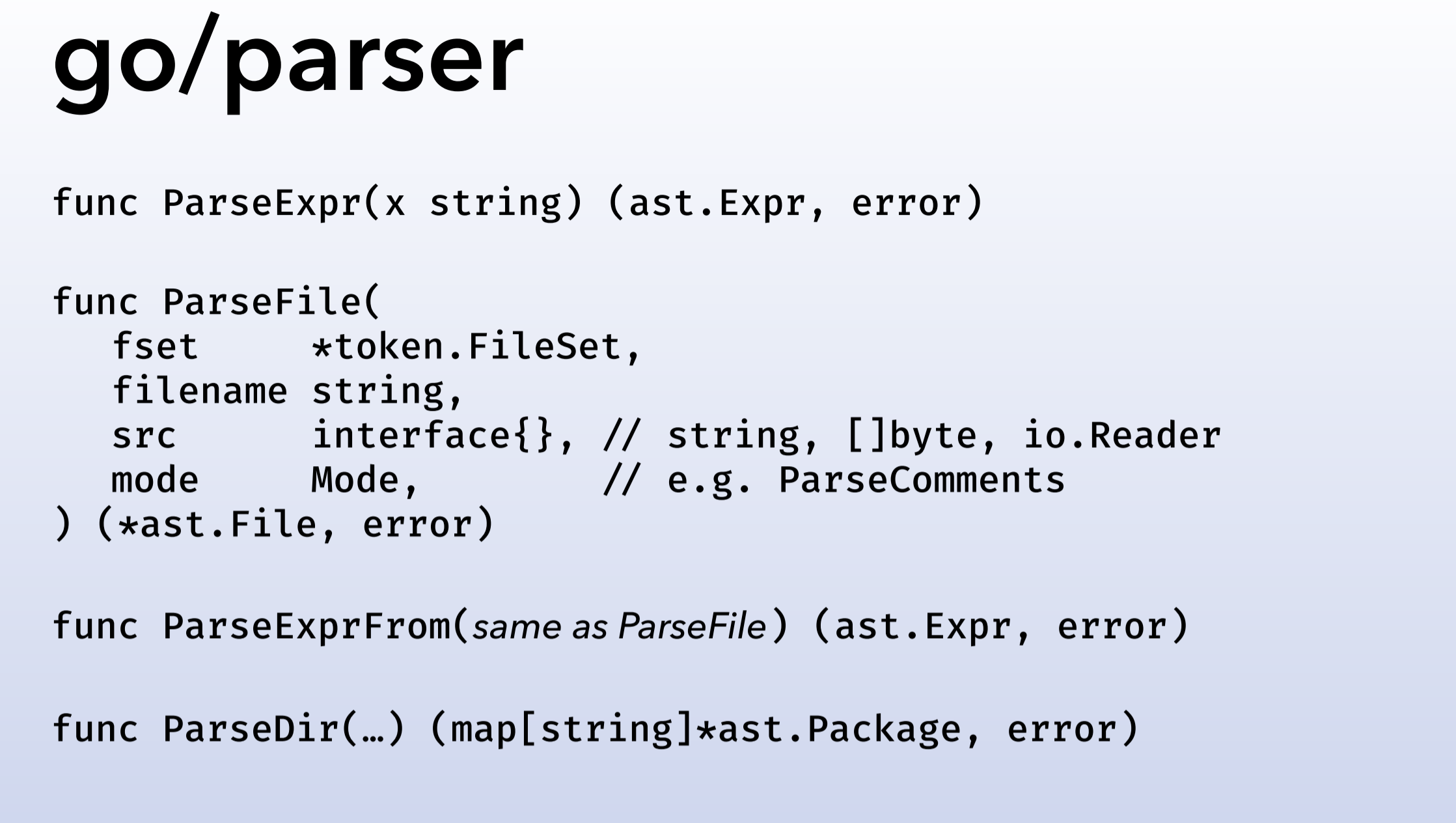 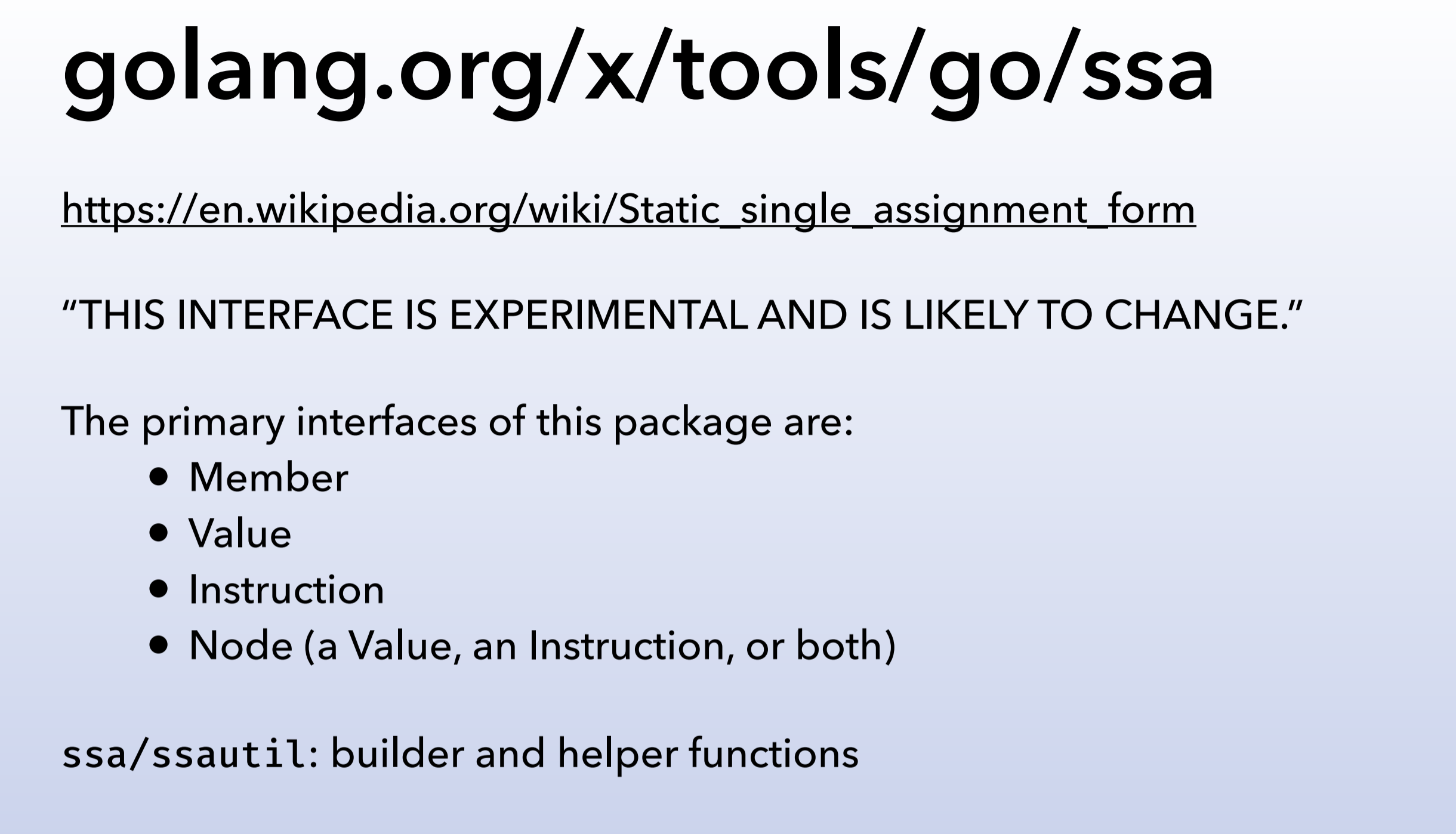 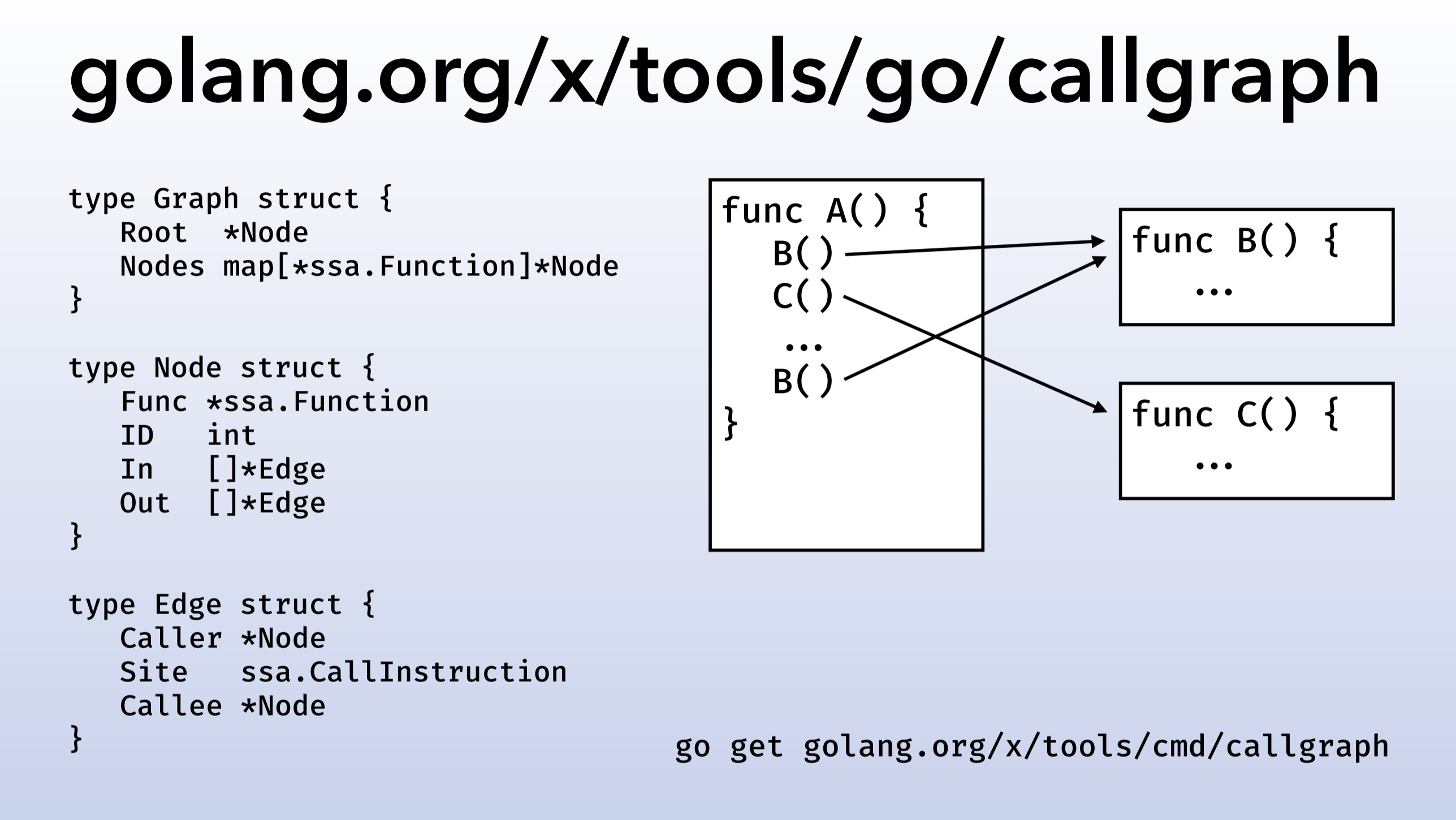 When you're traversing a call graph, use recursion, and maps are useful to keep track of what you've seen.

The analysis package defines the interface between a modular static analysis and an analysis driver program: 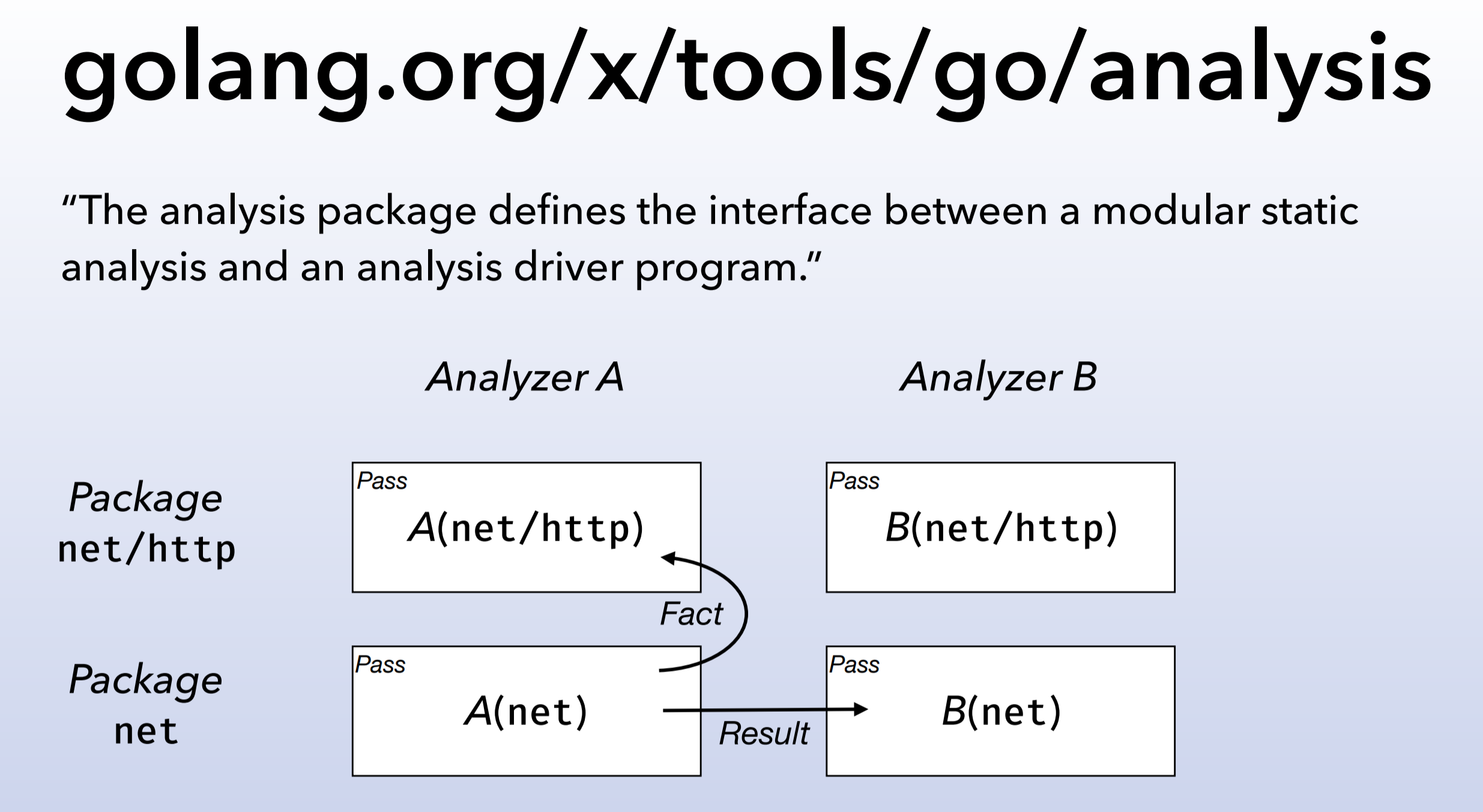 You can store a "Fact"s for later use.

The plan: For each package Pass,

There were a few bumps:

If you don't declare Facts, you don't get some things:

He hit a point of return: singlecheck.Main() calls os.Exit, so you can't report results after an invocation to that function.

He tried some workarounds:

But it was just not working well:

Rebuild from the ground up: 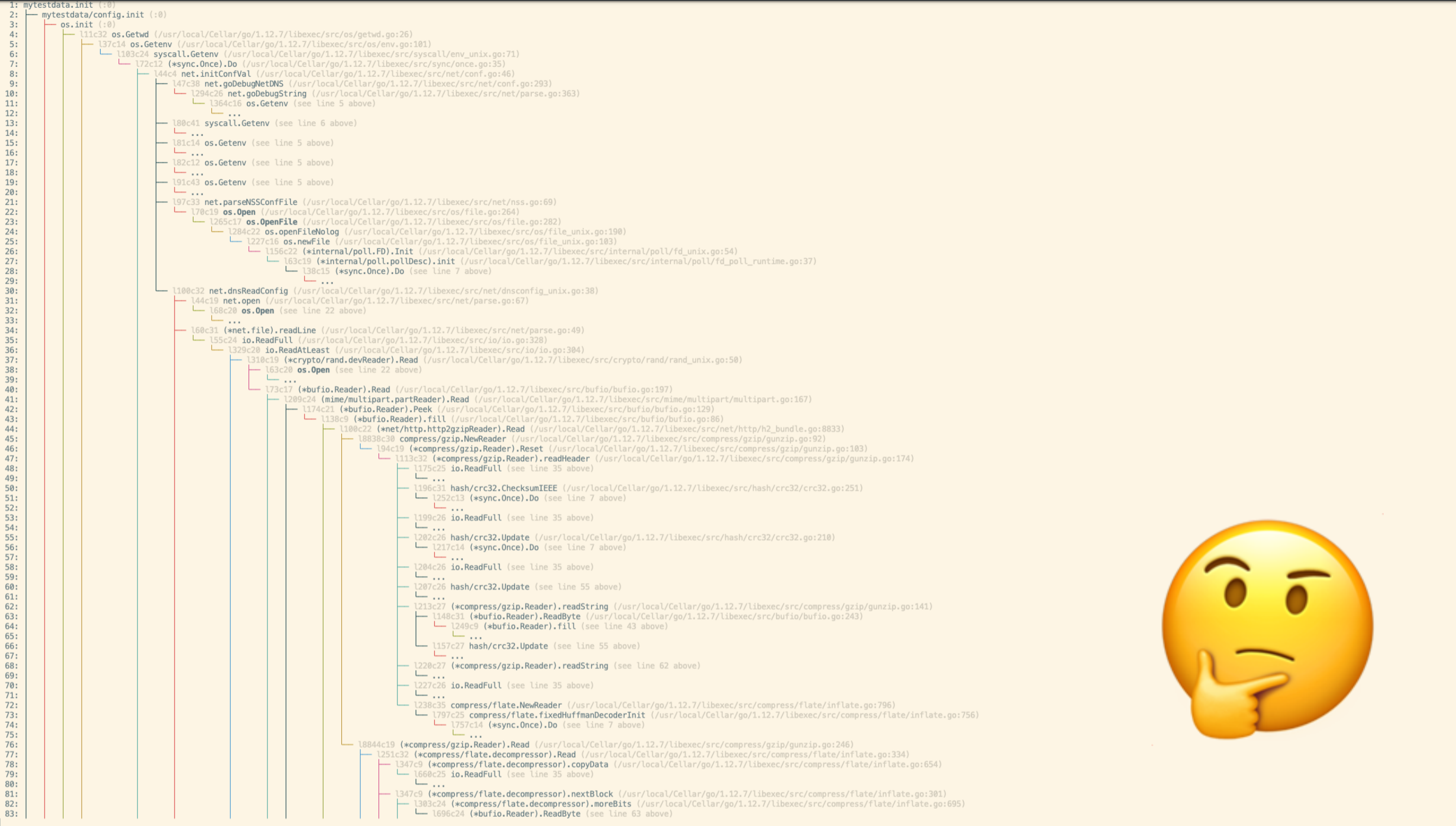 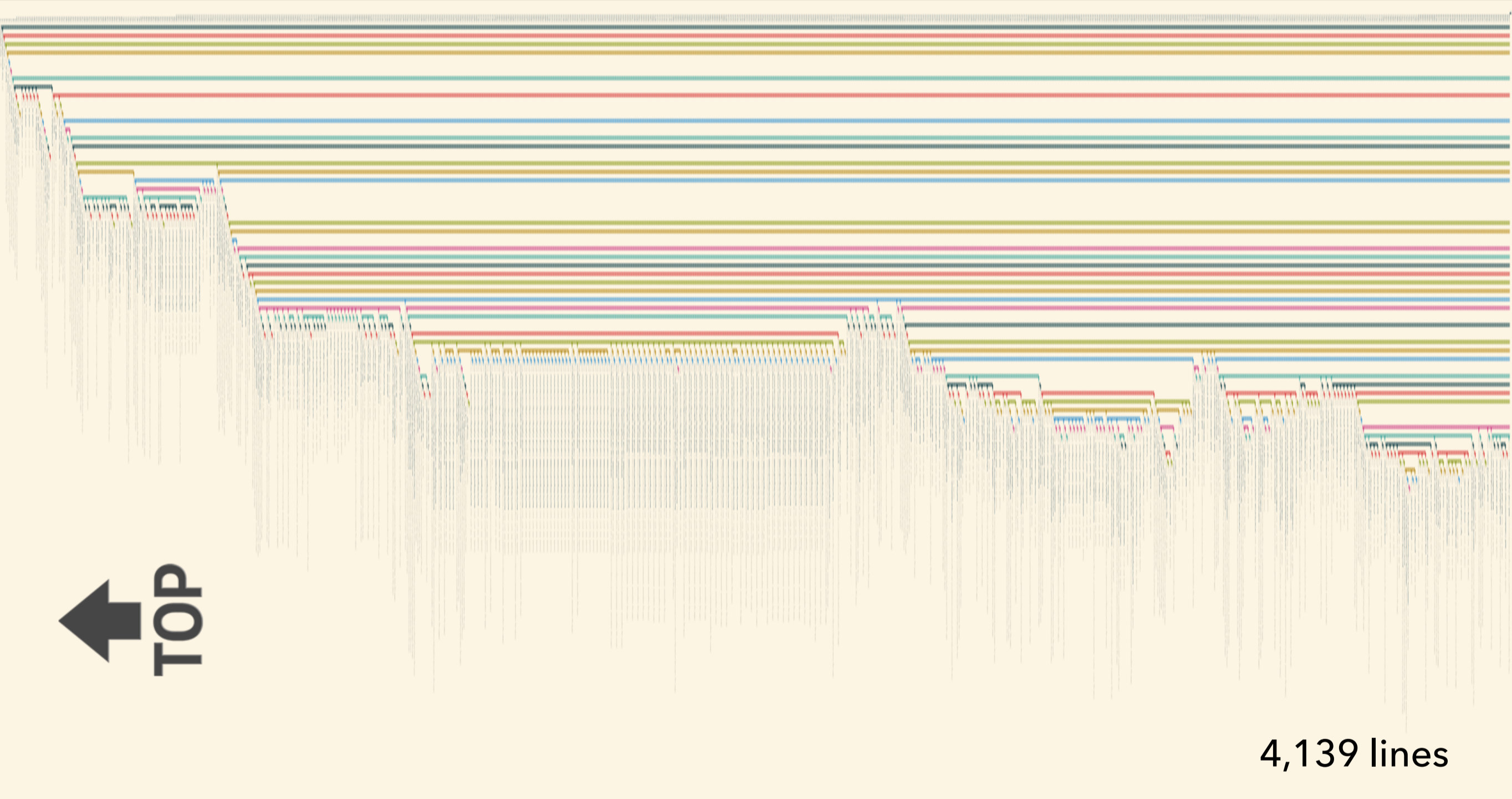 It's a lot of stuff, but it's useful and interesting! He started going through this call graph. Some observations: 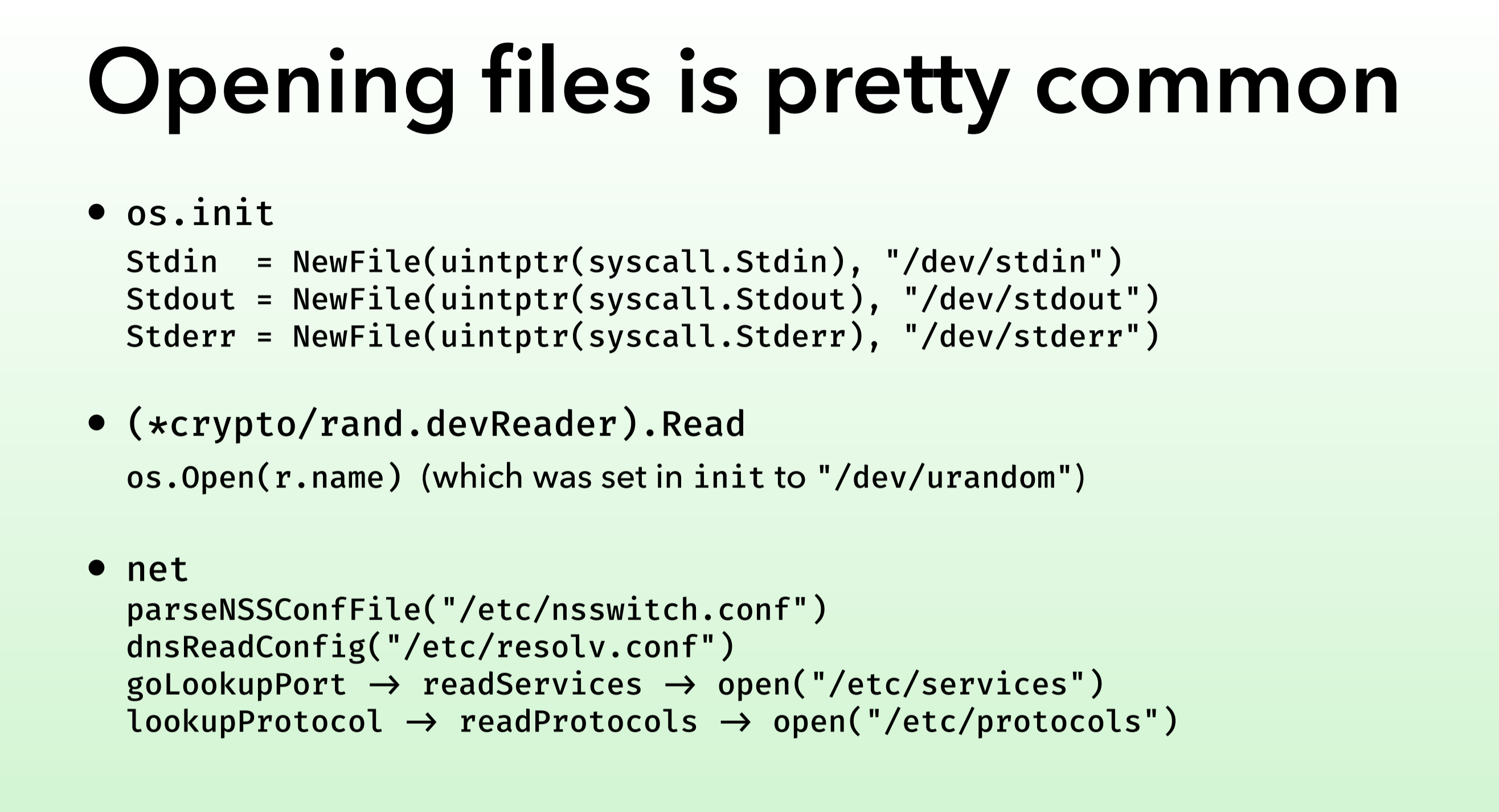 There were a few false positives, because call graph analyses don't precisely follow the actual runtime execution path of the code: 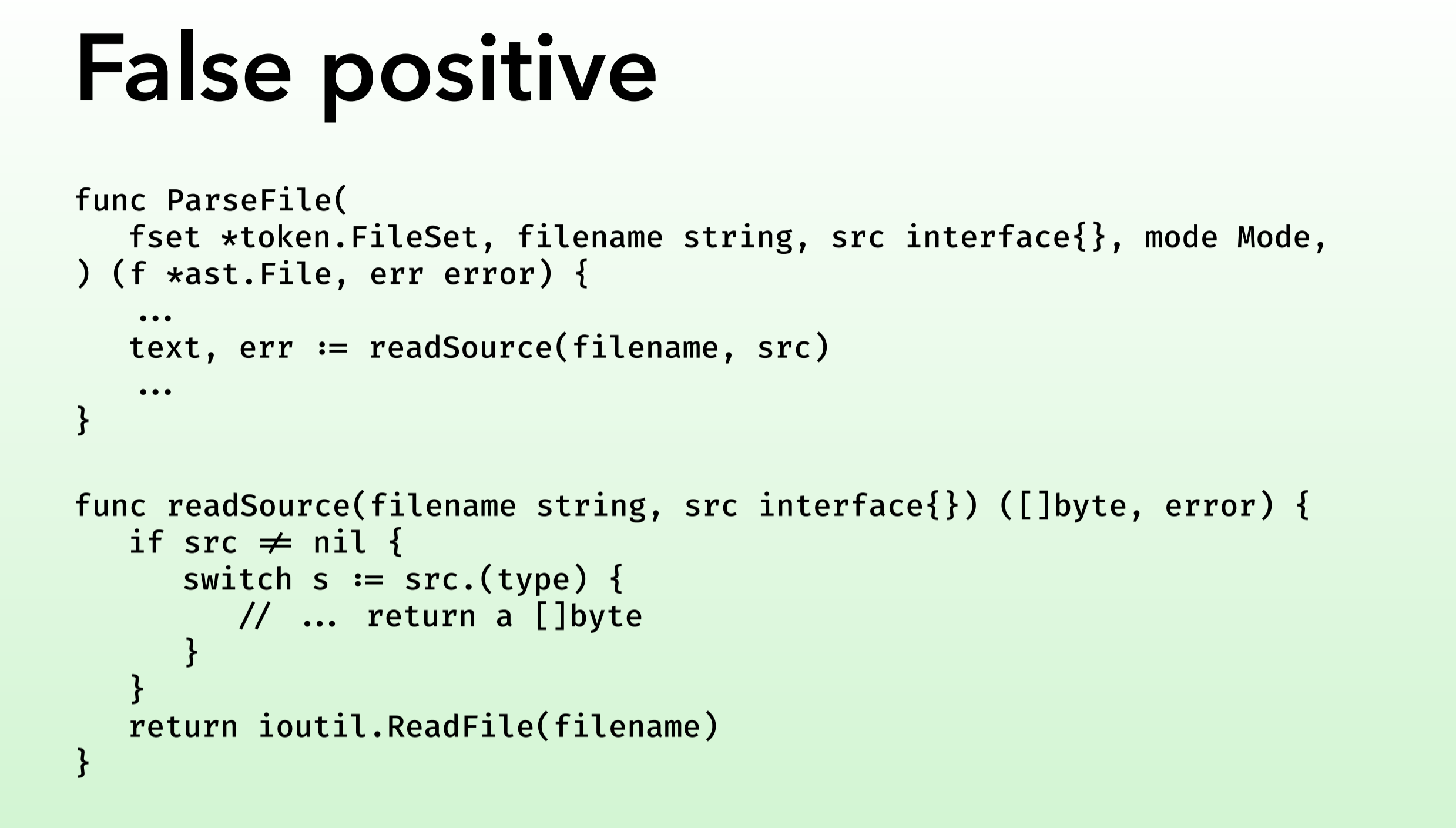 It looks like readSource and ParseFile use a file, but the example shows we don't actually use a file.

In callgraph, there is a 1-1 mapping: 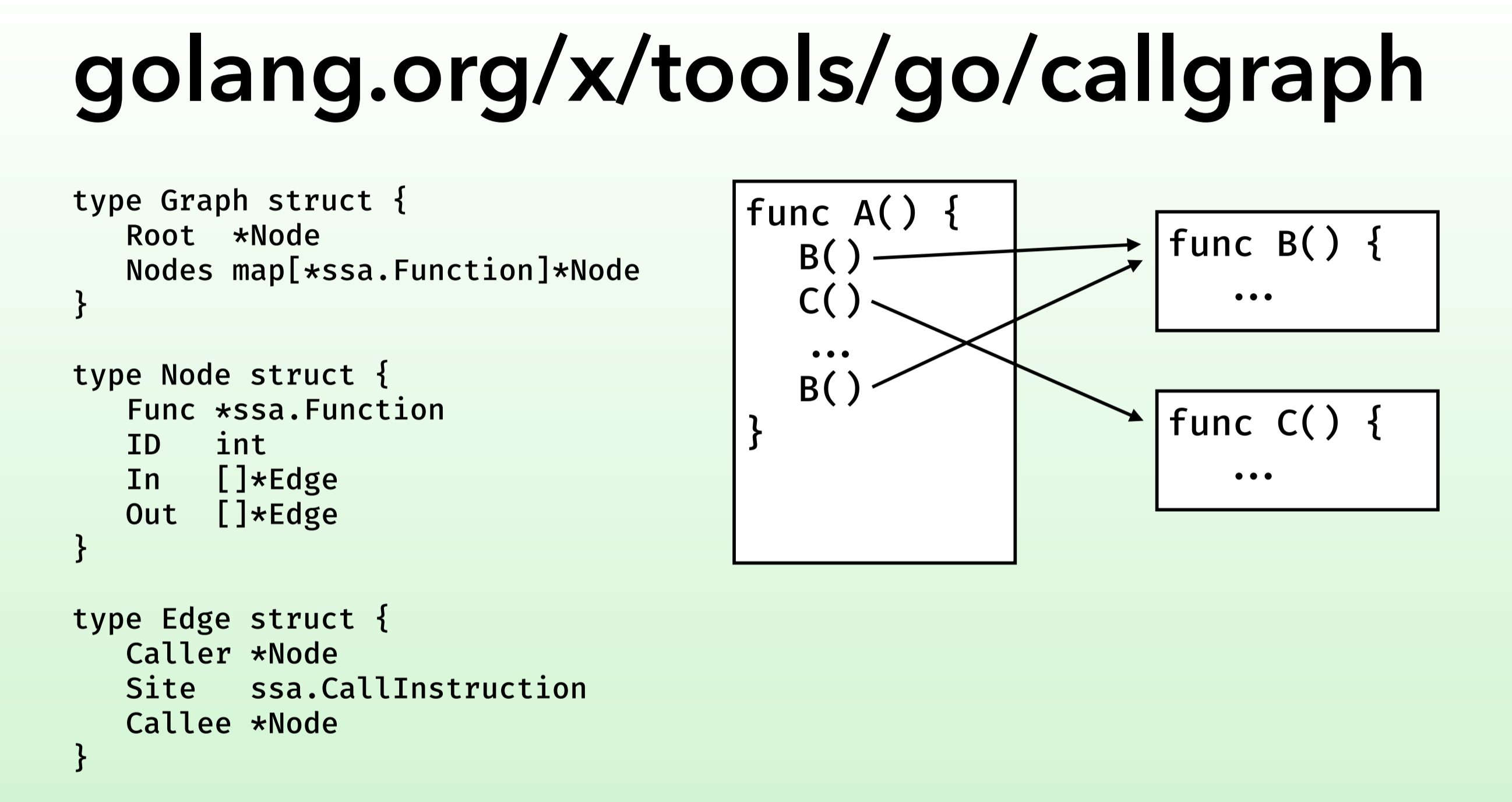 So the previous call graph really looks like this:

And because everything calls os.Getenv, you have a loop:

But if you special case handling of (*sync.Once).Do, you can rewrite the call graph to look like what it should:

Aside from a handful of these false positives, it works pretty well. The example below highlights all marked functions in red. 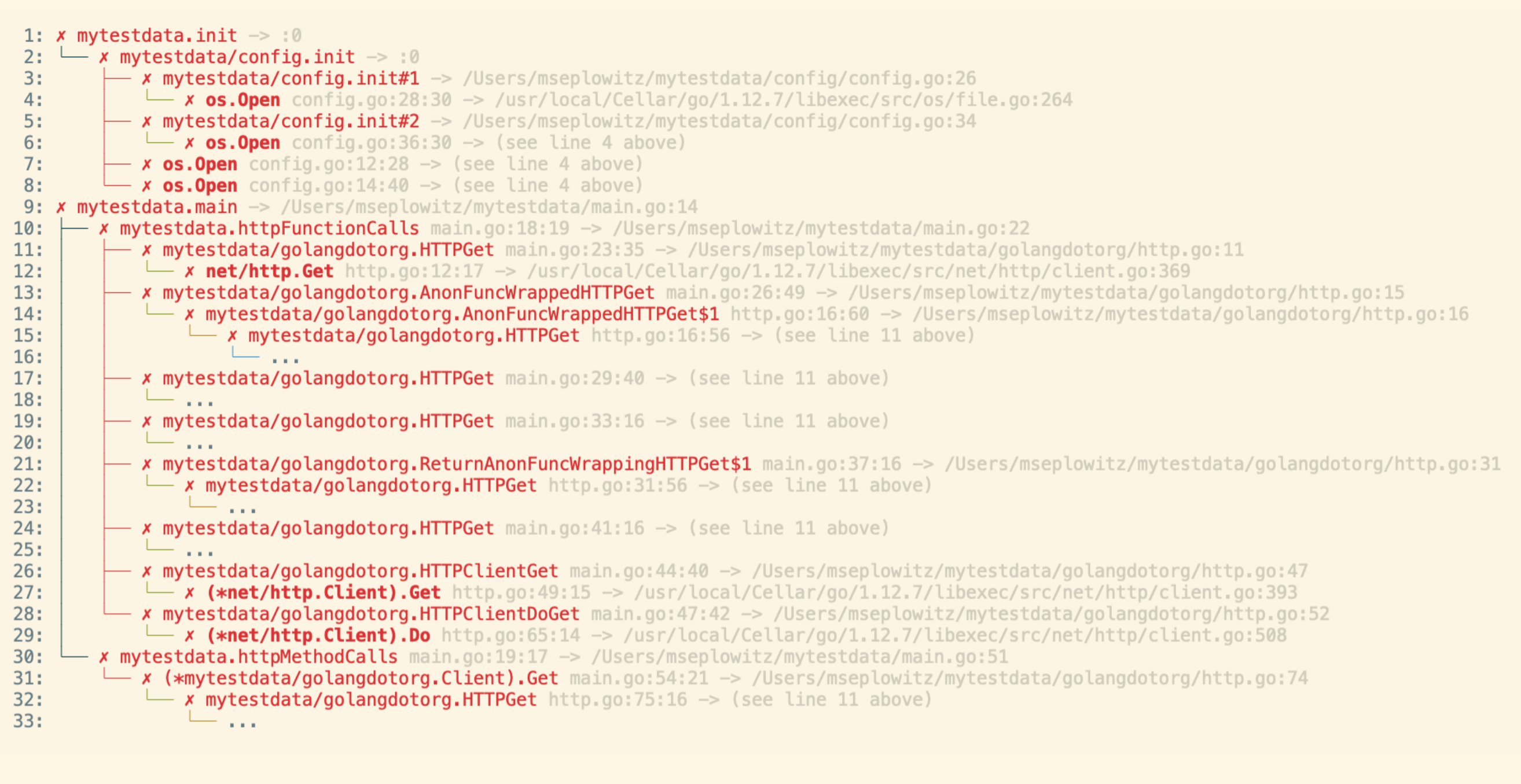 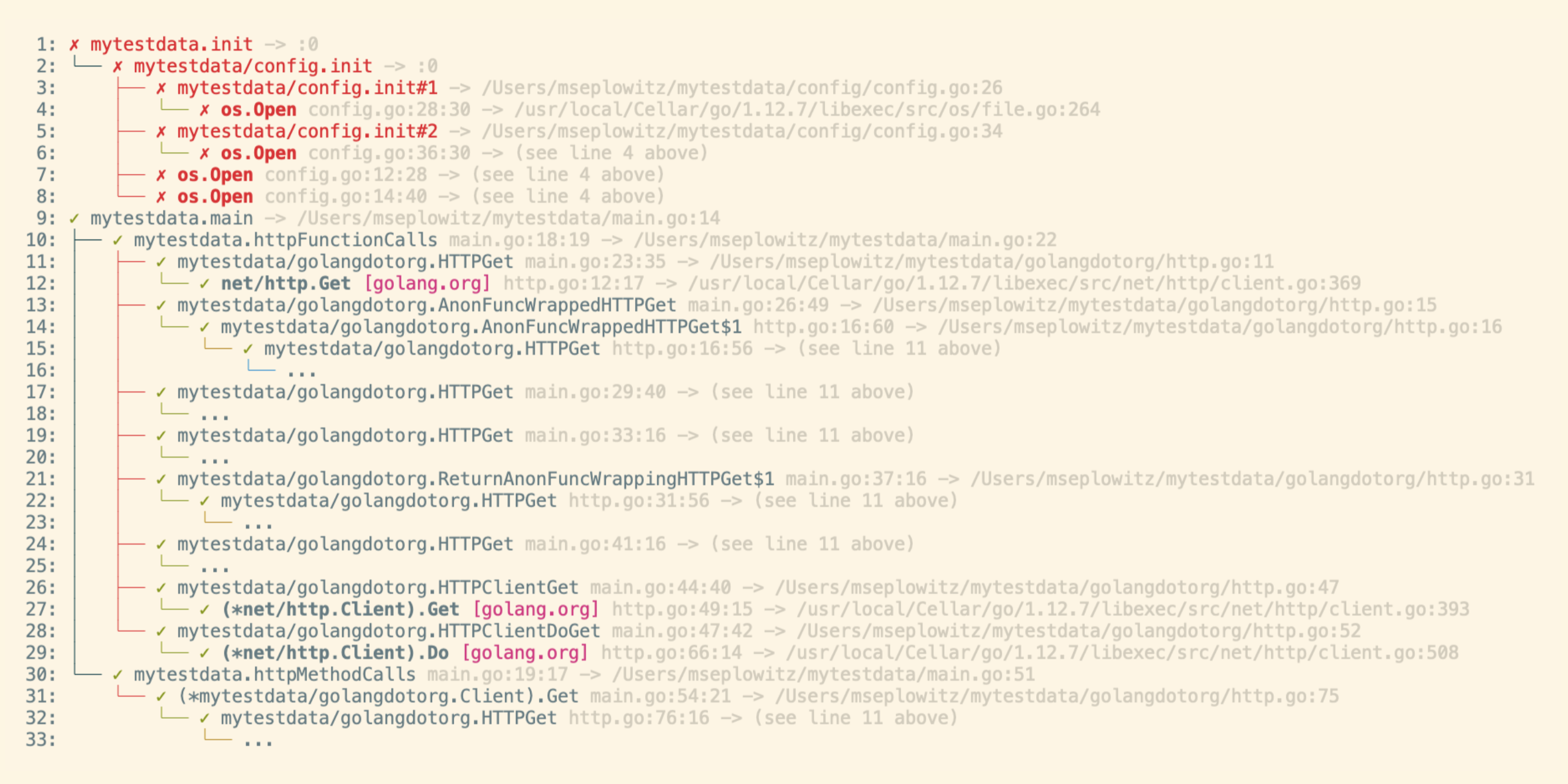 They ran it on real code:

If you're going to do static analysis, consider the following: