We're on the road to Go 2. But where exactly are we? Where are we headed? Come find out.

Development on Go has been a loop consisting of the following stages:

As we develop Go, we experiment and solicit feedback from the community to gauge whether or not that experiment will actually help simplify development and benefit the language. If it does, we will adopt that experiment. 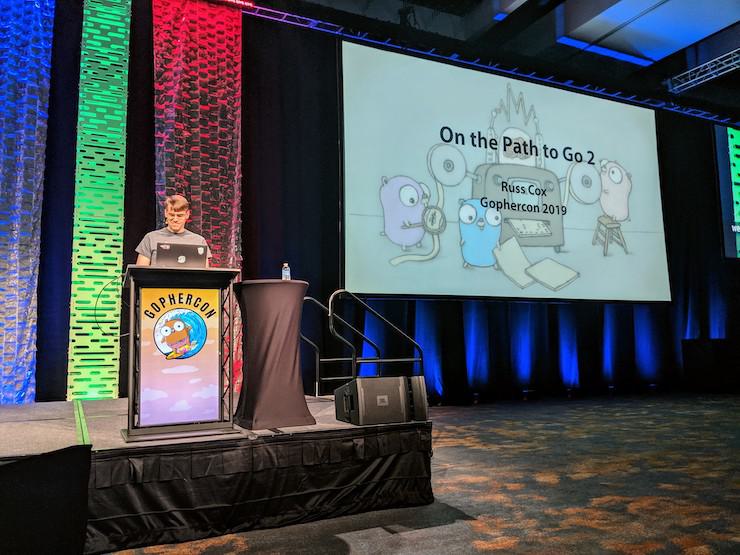 Development on Go began with a loop consisting of the following stages:

The 4 Rs of simplifying guide the process:

We reshaped the go command from many binaries into a single binary.

During early development, we noticed that appendToList was being rewritten frequently. This led to redefining those functions into the function we now know as append. It initially only supported bytes slices, but was extended to support all slices.

If something isn't useful to the language or an experiment didn't work, we remove it.

All Go files must be utf-8. Other encodings are not supported. This simplifies the toolchain by not having to support a wide range of encoding formats.

The initial development process was too simple however, because eventually we have to ship. That was added as an explicit step to enable shipping of production Go code and to allow users to experiment with the language. 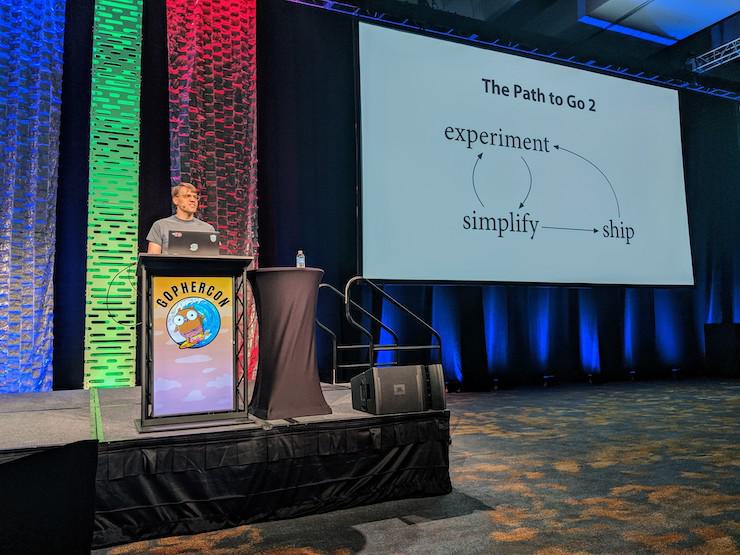 After Go1.0, any simplification must not include breaking changes.

The path to Go2

History of the error type

Circa 2008: Original syscall error was just an int. 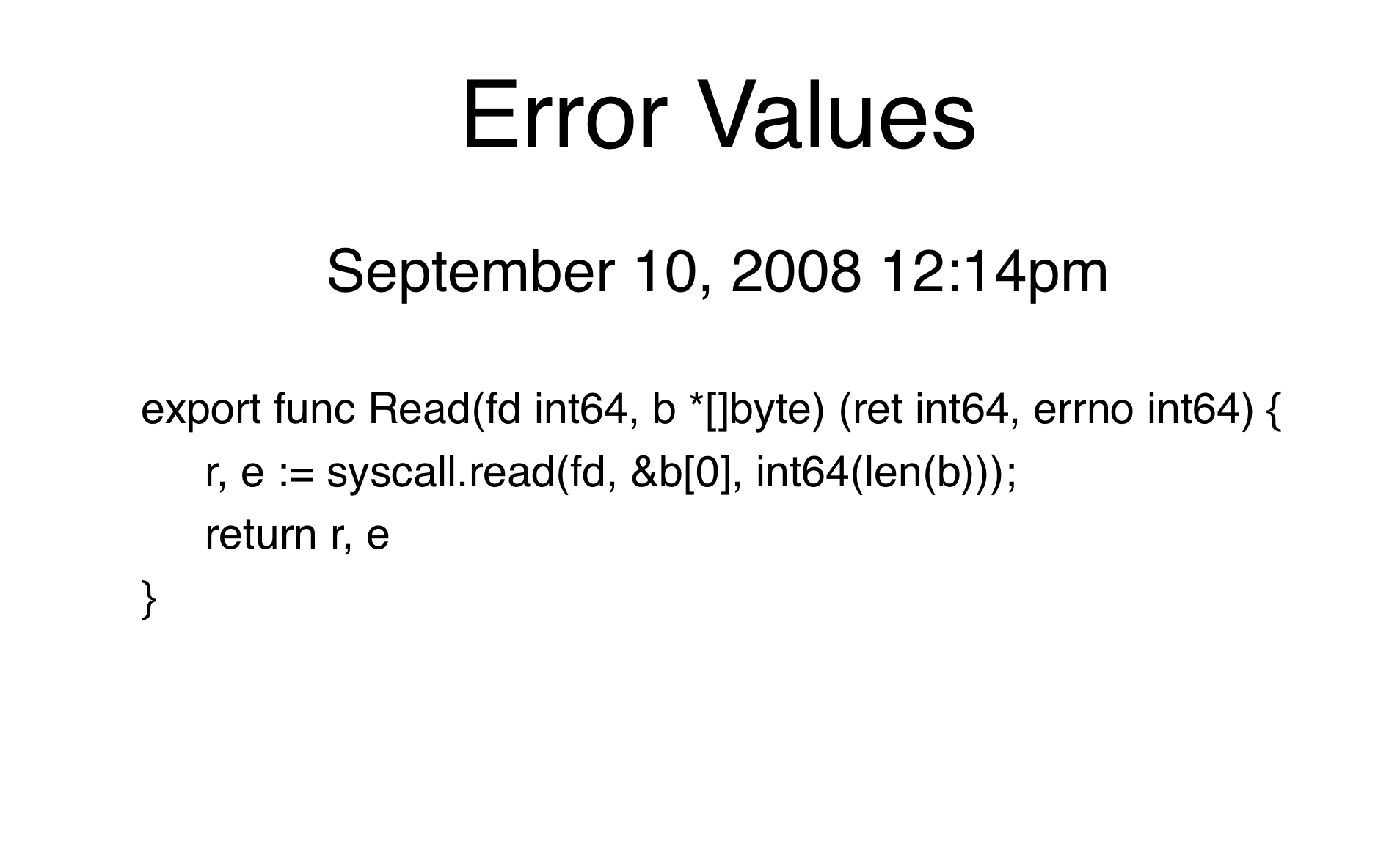 This evolved and as the standard library was written, more context was needed for the higher level libraries to determine how to handle errors properly.

2h after writing that initial code, we had an error type:

This API lasted 7 months. It was eventually reshaped into the error type that we know today.

As we developed the higher level libraries more, we noticed a pattern emerge of handling nested errors that many helper packages implemented. 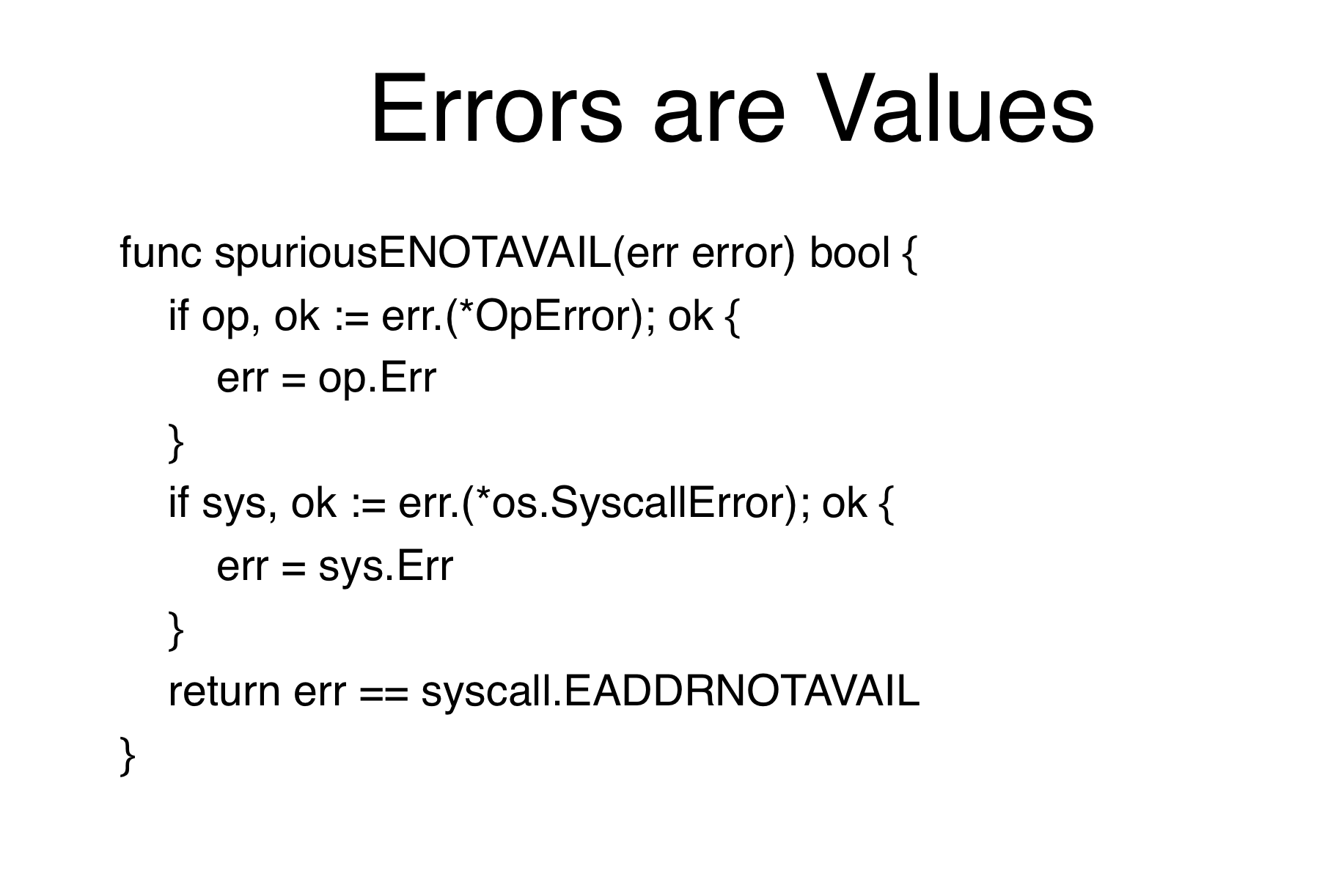 Thanks to these experiments, Go1.13 introduces the following error handling helpers:

The Unwrap interface remains optional, and aims to help library authors expose more information about the errors they return. 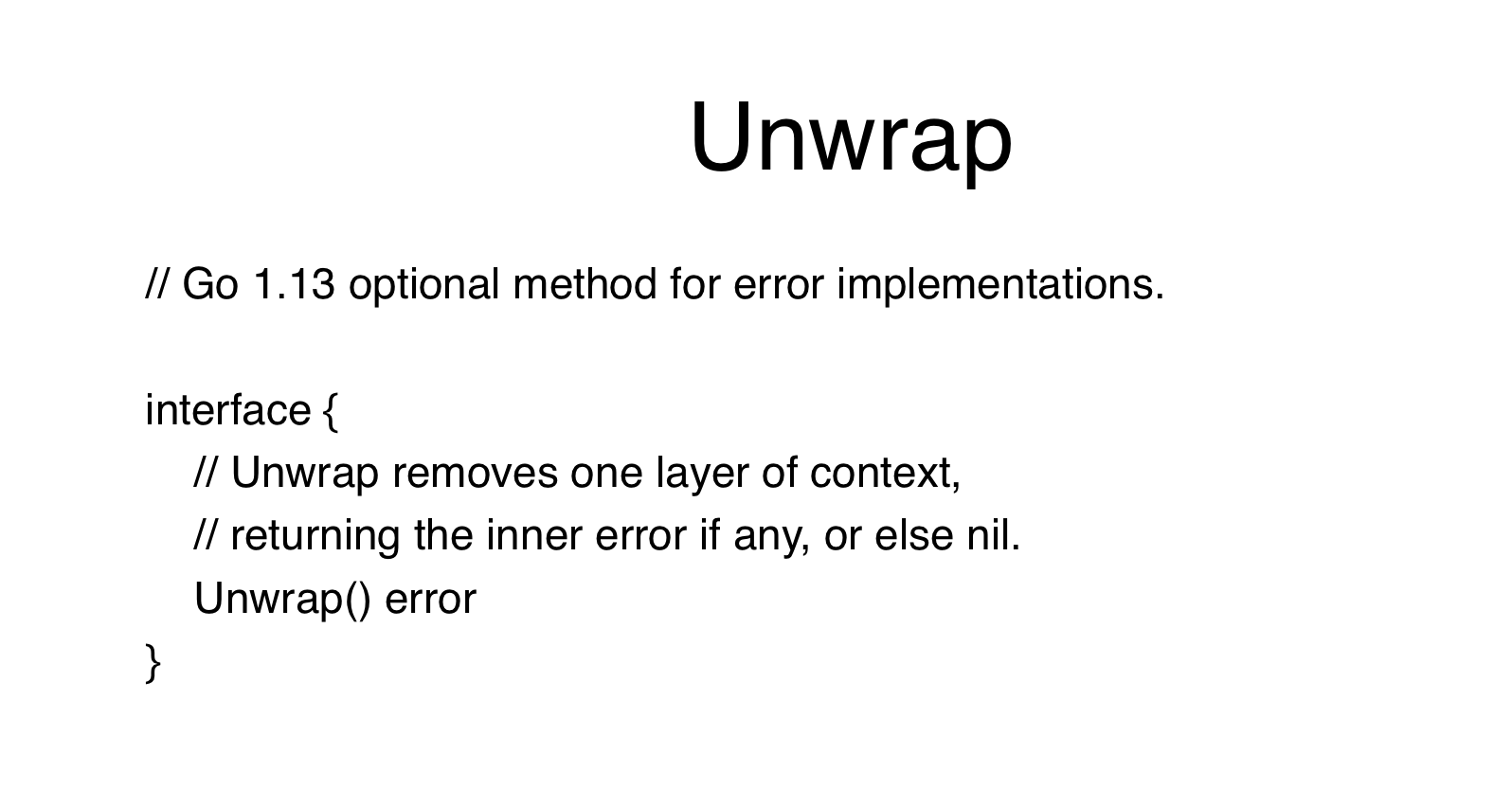 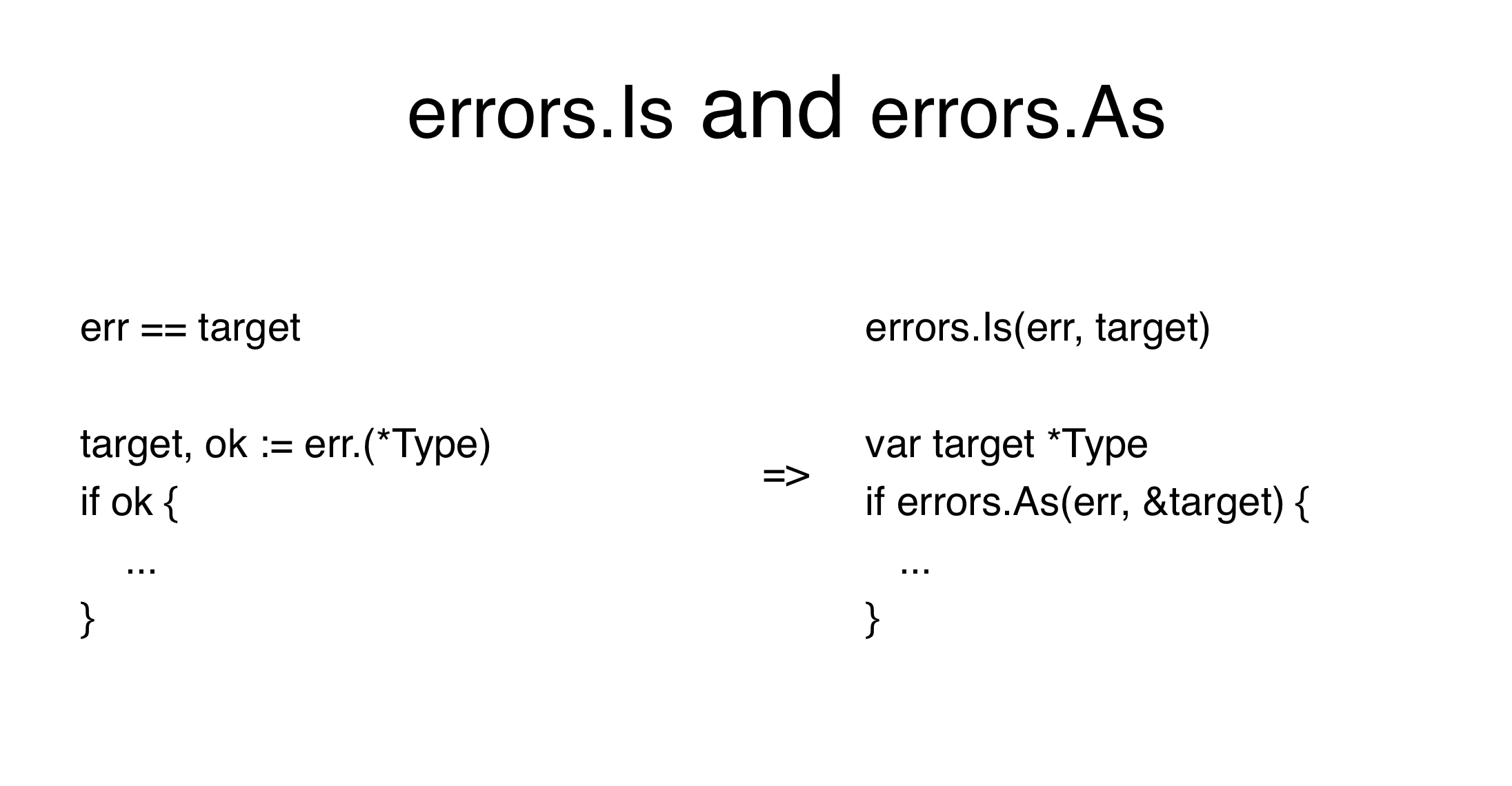 Another concern that the community raised was readability of code which handled many errors. This is important to us because as programmers the more error branches we have to keep track of, the harder it is to reason about the code.

This concern eventually led to the Check proposal. This simplified Go by simplifying error handling readability and removing lines of code.

However the try proposal was abandon. The community was concerned that removing the if statement would hurt debuggability (with print statements), readability, and break visibility of coverage tools into those blocks of error handling code. Ultimately it wasn't clear that the try proposal would actually simplify Go overall.

We started exploring a new design in 2018: contracts. We're working with programming language theory experts on the problem to help refine the proposal. However, we may still abandon the experiment if it doesn't fit well into the language.

Ian Taylor will present the latest design in his talk tomorrow.

With Go, we wanted to explicitly refer to dependencies similar to Java.

We started with goinstall which downloaded the dependencies into $GOROOT.

We initially left out versioning on purpose to focus on other problems like package installation. We encouraged package authors to adopt the same philosophy around compatibility that the Go team uses:

gopkg.in was a great experiment allowing for importing different changes.

We also had a lot of other great experiments in dependency management early on: 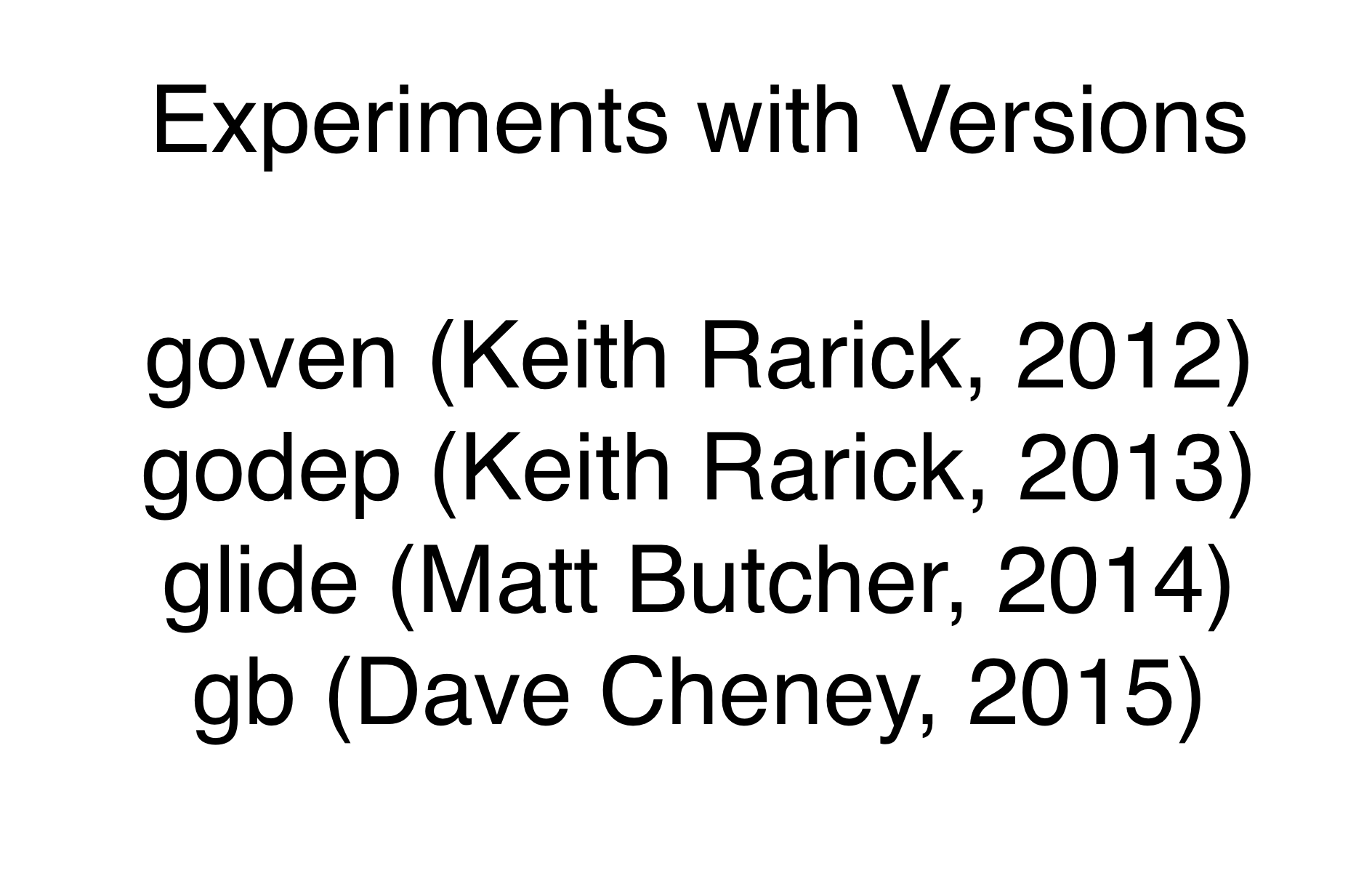 In 2015, we introduced the go vendor spec as a result of how many of these tools operated in practice. By formalizing the vendor directory, we hoped that it would simplify dependency management implementations. In practice, it didn't work as well as we had hoped.

In 2016, we formed the dependency working group. This team started work on dep: a tool to reshape all the existing tools into one.

The problem with dep and the vendor directory is that multiple distinct incompatible versions of a dependency are represented by one import path. We now call this the "Import Compatibility Rule".

We took this, grouped similar packages and gave these groups a name: Modules. The VGo system is now go modules. It now integrates directly with the Go command.

The challenge presented going forward is mostly around updating everything to use modules. Everything needs to be updated to work with the new conventions to work well.

Many tools use the go/build package in their dependency management tooling. This doesn't work well with both modules, GOPATH and vendor, so we created golang.org/x/tools/go/packages. This may eventually be merged into the standard library.

One immediate benefit of Go modules is module proxies. There are a few out there right now, and there are a few talks this year where you can learn more:

Please take a look at modules in Go1.13. Kubernetes, a fairly complex project, has already made the move, so it's likely you can too! If you can't, please let the Go team know.

Finally, as a result of all these changes, we can distill and refine the Go toolchain.

One example of this happening right now is go pls or "Go Please". Go please aims to create a smoother, standard interface to integrate with all editors, IDEs, continuous integration and others. See the talk about "Go Please" later today to learn more!

Each time we release a new experiment, even if we don't adopt it, we learn. Eventually we'll learn that we've experimented enough, and we'll have Go2.